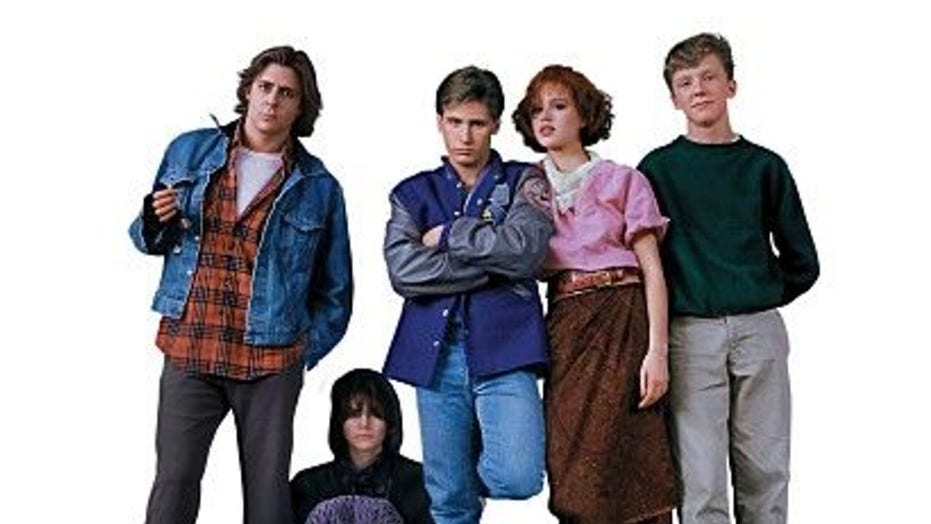 'The Breakfast Club': 5 Facts About the John Hughes Classic to Celebrate Its 35th Anniversary

One of America's most beloved movies is celebrating its 35th anniversary this year. Here are five facts you did not know about the John Hughes 1985 classic, The Breakfast Club.

35 years ago today, the world was introduced to an intrepid gang of high school students from different cliques who called themselves “The Breakfast Club.”

The John Hughes 1985 classic is praised to this day for showing the world a realistic look at some of the timeless struggles that America’s youth endure on a daily basis. It also made cast members Molly Ringwald, Ally Sheedy, Judd Nelson, Anthony Michael Hall and Emilio Estevez household names synonymous with Hughes’ film.

After 35 years, the film remains a seminal classic that’s still beloved by even new generations. However, the film’s production had such a storied path to success that there’s a slew of interesting trivia facts that even the most die-hard “Breakfast Club” fans may not have heard.

To help celebrate the film’s 35th anniversary, below are some fun facts about “The Breakfast Club.”

Rick Moranis was fired from the film

Rick Moranis was fired from the film 'The Breakfast Club' for trying to play the janitor as a Russian immigrant. (Jeff Kravitz/FilmMagic)

An important but understated role in “The Breakfast Club” was Carl the janitor, played by actor John Kapelos. However, the character would have been much different if Hughes and “Ghostbusters” actor Rick Moranis had their way.

When production started, Hughes was elated that Moranis agreed to play the janitor. However, for a role that was relatively grounded in reality, Moranis had a very different interpretation of the character.

According to a 2015 article in Vanity Fair, Moranis showed up to set with his hair cut short, gold caps in his teeth and a pre-prepared thick Russian accent. When the first footage of Moranis’ portrayal went to producer Ned Tanen, he couldn’t put a stop to it fast enough. As co-producer Michelle Manning told the outlet:

“What the f--- was that?” Tanen screamed into the phone.

“Well, Rick came and that is his interpretation of the janitor,” Manning said.

“No, we’re not going to do that,” he stated, insisting that the accent would take the audience out of the movie.

“Ned said we’re not doing that,” Manning reported to Hughes.

“Then I guess I have to,” said Manning.

Molly Ringwald got a sexist scene cut from the film

Ringwald had worked with Hughes on the 1984 film “Sixteen Candles.” As a result, she had a little more pull on the set than the rest of her co-stars. The actress penned a New Yorker article in 2018 about the sexist undertones of the film. In it, she revealed that she complained to the director about a scene in which Mr. Vernon, the teacher in charge of watching the students, found a peephole into the women’s locker room and spied on a female teacher who was swimming nude.

The actress lobbied for the director to cut the scene arguing that it was sexist. To the director’s credit, he listened and immediately penned an alternate scene.

“Although I’m sure the actress who had been cast in the part still blames me for foiling her break, I think the film is better for it,” Ringwald wrote.

She also notes that she and her mother were upset that a moment in which her character, Claire, has to show her underwear. It featured an adult actress stand-in for fear of asking a minor to expose her underwear. Due to the discomfort of the scene, both women complained but to no avail.

When the film was released on Blu-ray, the Criterion Collection’s restored edition featured 50 minutes of previously never-before-seen footage, according to Variety.

Among those scenes was one featuring Claire and Allison striking up an uncomfortable conversation in the ladies' room. Claire comments on Allison’s unique eating habits, lecturing her about eating chips in the bathroom. Clair realizes she offended Allison and notes she could “probably handle it” if she wanted to talk with her. In response, Allison further baits Claire by eating a chip that she dipped into the sink.

The scene never made it to the original cut of the movie, but thanks to its enduring popularity, came out 30 years later for fans to enjoy.

The library was actually a gym

The library set for 'The Breakfast Club' was actually a high school gym. (Universal Pictures/Getty Images)

The same Criterion Collection Blu-ray release came with an audio commentary track featuring Hall and Nelson. According to Film School Rejects, the stars revealed that the library where most of the film takes place did exist in a real high school, but it was not the library. That was just a clever set design from people who turned a gymnasium into a believable library set.

The duo shared that a local football team, the Chicago Blitz, wasn’t able to use their regular space for practice due to the shoot.

“They hated us,” Nelson recalled.

Anthony Michael Hall had a growth spurt during filming

Also revealed in the audio commentary was how difficult it was for Nelson to act alongside Hall in the later moments of the film due to his co-star’s incredible growth spurt.

“When we first auditioned, I was probably maybe two inches taller than him,” Nelson explained. “When we started rehearsals I was maybe half an inch taller than him. By the end of the movie Michael was taller than I was, and I’d already begun writing letters to geneticists.”