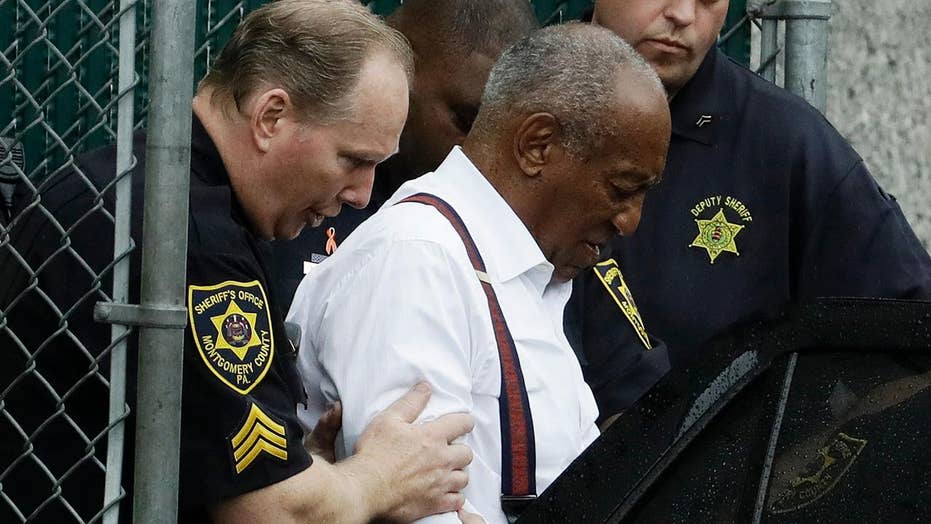 Comedian Bill Cosby has filed a lengthy appeal of the sex assault conviction that landed him in prison, complaining the testimony of five other accusers was "strikingly dissimilar" to the pending felony charges and should not have been aired in court.

The 81-year-old Cosby has been serving a three- to 10-year prison term since September at a state prison near Philadelphia. His insurance company this year recently settled lawsuits filed by at least eight other women who had accused Cosby of sexual misconduct and, in most cases, defamation.

This Sept. 25, 2018, photo provided by the Montgomery County Correctional Facility shows Bill Cosby after he was sentenced to three-to 10-years for sexual assault. The Pennsylvania judge who presided over Bill Cosby's sex-assault case says he let five other accusers testify at Cosby's retrial because they showed his actions were "so distinctive" they became "a signature." (Montgomery County Correctional Facility via AP)

The appeal, filed in Pennsylvania Superior Court, attacks Cosby's conviction on a number of grounds that have been central to the case, and argued repeatedly, since his December 2015 arrest. The defense has long argued that any testimony from other accusers would unfairly stack the deck against Cosby, given that he was never charged in those cases. Cosby's lawyers have also complained that many of the accounts are decades old, and nearly impossible to defend.

And they say the five women who testified to bolster the prosecution case at Cosby's retrial last year alleged different types of sexual contact than Andrea Constand did.

"This evidence was used to strip Cosby of his presumption of innocence and to try to establish that Cosby had the propensity to sexually assault women. This evidence never should have been admitted at trial," lawyers Kristen L. Weisenberger, Brian Perry and Sarah Kelly-Kilgore wrote.

They also said O'Neill should have stepped down over an alleged feud with a former prosecutor who had declined to charge Cosby when Constand first went to police in 2005.

And they said the jury should not have heard Cosby's 2006 deposition testimony from Constand's civil case, in which he talked of getting quaaludes in the 1970s to give women before sex. That testimony, unsealed after a decade, led a new district attorney to reopen Constand's police complaint and ultimately charge Cosby.

FILE - In this Sept. 25, 2018, file photo, Bill Cosby arrives for a sentencing hearing following his sexual assault conviction at the Montgomery County Courthouse in Norristown Pa. Cosby has filed a lengthy appeal of the sex assault conviction that landed him in prison and says the judge allowed testimony from other women accusers that wasn’t relevant.  The 81-year-old Cosby has been serving a three- to 10-year prison term since September at a state prison near Philadelphia. (AP Photo/Matt Rourke, File)

O'Neill, in his memo this year, said the other women's accounts showed a long pattern of criminal behavior.

"In each instance, (Cosby) met a substantially younger woman, gained her trust, invited her to a place where he was alone with her, provided her with a drink or drug, and sexually assaulted her once she was rendered incapacitated," O'Neill wrote. "These chilling similarities rendered (their) testimony admissible."

Cosby's conviction came after a storied, 50-year entertainment career in television, film and comedy, and he'd earned the moniker "America's Dad" through his top-ranked sitcom, "The Cosby Show."

Camille Cosby, in a statement Tuesday, called her husband "one of our great American treasures," and said his appeal was important for all "wrongfully convicted of a crime, without any proof."