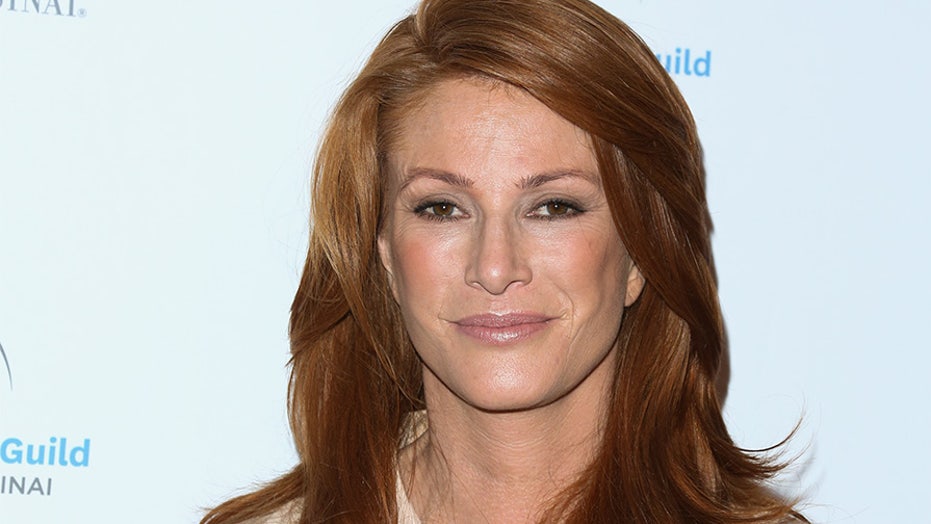 Former Sports Illustrated and Playboy model Angie Everhart is opening up about her personal health battle.

The 50-year-old joined “Real Housewives of Beverly Hills” star and heiress Eden Sassoon on “The Doctors” Monday to discuss their mysterious illnesses caused by breast implants.

Everhart shared that she has gone through several different pairs and sizes of breast implants, which led to four surgeries to remove them. But when her son Kayden was born in 2009, her implants “popped.”

“Right after that, a year and a half later, I got cancer,” said Everhart, as reported by UK's Daily Mail.

Angie Everhart on "The Tonight Show with Jay Leno" circa 1995. (Photo by Margaret Norton/NBC/NBCU Photo Bank via Getty Images)

In 2013, a rep for the supermodel confirmed to Us Weekly in a statement that she was diagnosed with thyroid cancer.

MELISSA GILBERT SAYS 'NO MORE' TO PLASTIC SURGERY: 'I'M TRYING TO EMBRACE THIS PROCESS OF AGING'

"Word has been trickling out about supermodel/actress Angie Everhart’s health," her rep said at the time. "She wants to set the record straight by letting everyone know that it is true that she has been diagnosed with thyroid cancer, however, the prognosis is very good."

"She expects to be back to work and to mommy duties in a few weeks," the rep continued. "The most important reason she is revealing this information is to encourage people to learn about cancer prevention, its signs and treatment immediately. She would also like to thank those who have provided such tremendous support."

Everhart is now cancer-free, but she hasn’t completely escaped the daily aches and pains.

“I’m cancer-free, but I still have the same symptoms — shoulder pain, brain fog, pain in my body on a constant basis.”

Former Sports Illustrated and Playboy model Angie Everhart is opening up about her personal health battle. (Photo by Foc Kan/WireImage for MAC Cosmetics)

Dr. Ritu Chopra, a Beverly Hills plastic surgeon and a guest on the TV show, shared that while the implants are gone, the body does form a capsule of scar tissue that can harden, causing pain.

“When they were finally removed, I still have the capsulation in there, and I feel horrible,” said Everhart.

“This is a woman’s issue that needs to be talked about,” she stressed.

Eden Sassoon speaks onstage during the 6th Annual Thirst Gala at the Beverly Hilton Hotel on June 30, 2015, in Beverly Hills, California (Photo by Rachel Murray/Getty Images for The Thirst Project)

Sassoon, 46, said she, too, decided to remove her implants after experiencing pain in her shoulder and neck, along with head fog. The reality TV star insisted that since the removal and being on thyroid medication, “everything is amazing.”

Sassoon previously told Glamour magazine she was 19 when she had her first breast implants. However, her body began fighting them.

“For the last six years, I knew something wasn’t right with my breast implant,” she explained. “My heart [fears] were a separate issue. But in my mind, I was like, ‘If they’re going to tell me my heart is good and I’m not going to drop dead of a heart attack, then start over! Get this out, cleanse your body.’”

"Now that I took my implants out, I just get to be me,” Sassoon continued. “Or start to figure out who that really is… My whole mind-set just shifted. I don’t regret this decision to take them out. Not for a minute. I can go anywhere with no boobs and be OK. It took me years until I was ready to remove my implants. That was part of my journey. Maybe in 10 years I won’t want the fillers and injections I put into my face, but for now, I’m happy, healthy, and my breasts are not a problem. I have other struggles with what I put in my mouth, but as far as keeping my looks, I want to be youthful and young. If you’re subtle with it, why not? But when are you just OK?

“The past is the past, and it got me here today. I would tell my 19-year-old self to enjoy the journey, because at some point you’re going to get to know who you really are, and this doesn’t matter at all in the slightest. Because the way people perceive you isn’t what we even are perceiving ourselves as. Or the way we perceive ourselves isn’t what people think of us as. So the time has come to just be me.”