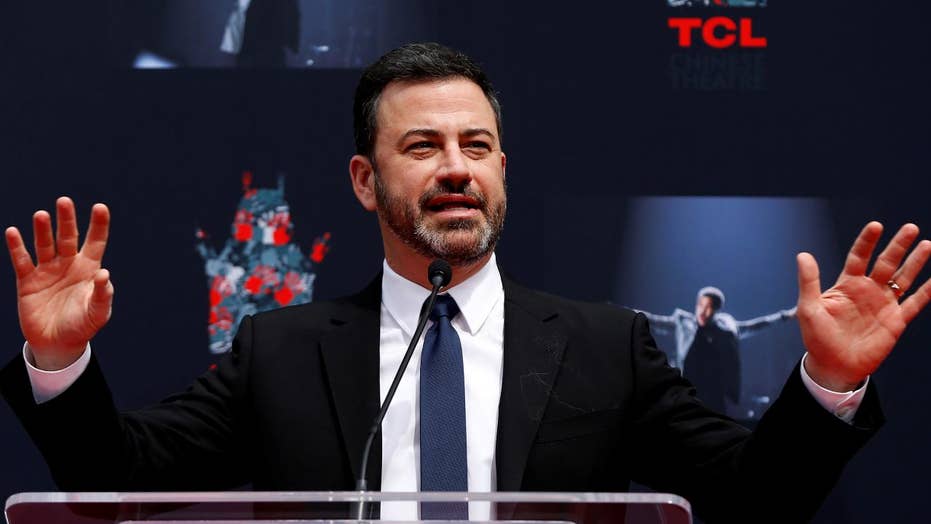 Late-night host Jimmy Kimmel made fun of first lady Melania Trump’s appearance at the White House Easter Egg Roll. Included in the jokes was a quip about her accent, something some on social media found offensive.

Jimmy Kimmel said on Tuesday that he would rather have a chimpanzee occupying the Oval Office than President Trump.

The "Jimmy Kimmel Live" host called Trump a “liar” for declaring that he meant to say “wouldn’t” instead of “would” during Monday’s joint press conference with Vladimir Putin.

The ABC late-night show aired a clip of Trump saying he meant to say, “I don’t see any reason why it wouldn’t be Russia,” when asked about election meddling.

Kimmel mocked Trump’s correction, “I have to say, when you said, ‘I don’t see any reason why it would be Russia,’ for a minute there it almost seemed like you were hiding something from us… like there was something Putin knew about you that you wanted him to keep quiet.”

Trump’s press conference with Putin has been widely criticized by pundits on both sides of the political aisle. Kimmel even mocked First Lady Melania Trump as the person who, he assumed, came up with the strategy to claim the president simply misspoke.

“She hates him the most,” Kimmel said.

“I would rather we had a chimpanzee as president of the United States. At least with a chimp there would be somebody to eat the bugs out of Rudy Giuliani’s hair,” Kimmel said.

Kimmel has attacked Trump on a regular basis and earlier this month accused him of lying about an interaction the president claims they had.

The TV host has, in recent months, spoken out about politics on his show.

In May of 2017, Kimmel opened an episode of “Jimmy Kimmel Live” to reveal the circumstances of his son’s birth, which was met with complications to his heart. In an emotional and tearful monologue, he revealed his son was born with a heart disease that required surgery. Thanks to his experience with the doctors and nurses who helped save his child’s life, he used subsequent time on his show to call on fans to contact their local representatives about renewing the Children’s Health Insurance Plan and much more.

The decision to break from comedy for some serious topics was controversial for the funnyman and he has since used his platform to dabble in politics on a regular basis. Back in March, Kimmel even admitted to Oprah Winfrey that his foray into politics may have hurt his bottom line.

“That’s not ideal, but I wouldn’t change anything I said," he told Winfrey in O Magazine.