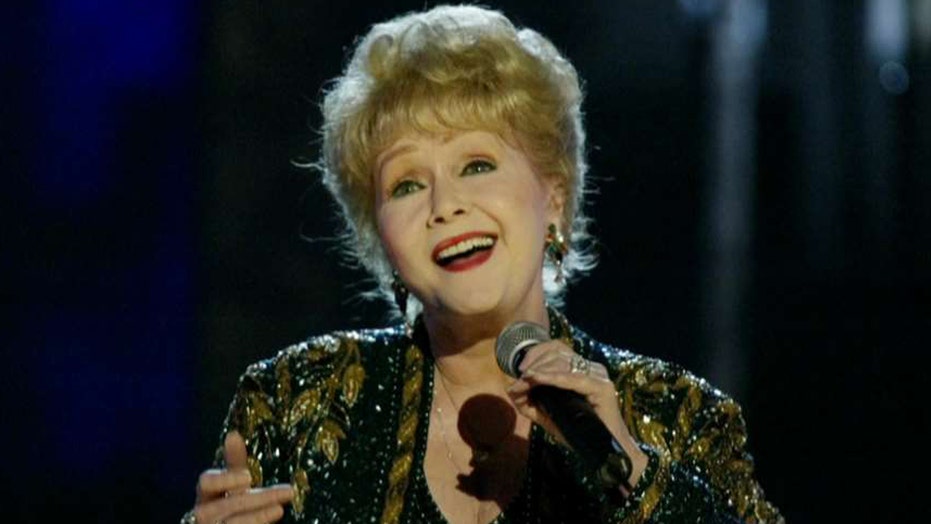 Legendary entertainer's death comes one day after the death of her daughter, Carrie Fisher

Screen icon Debbie Reynolds died on Wednesday at the age of 84 after suffering a stroke. Her death came one day after her daughter, actress Carrie Fisher, died at age 60 after going into cardiac arrest on a flight from London to Los Angeles last week.

The celebrated song and dance legend's storied career was defined by her entertaining, energetic and thoughtful performances that gave the world some of the most enjoyable and enduring films ever.

In celebration of Reynolds' incomparable life and legacy, we're taking a look back at some of the star's greatest roles.

"Singin' in the Rain" (1952)
Reynolds got her first leading role when she was 19 years old and she was cast opposite Gene Kelly and Donald O'Connor in the beloved musical "Singin' in the Rain." Reynolds stars as aspiring Hollywood starlet Kathy Sheldon who meets and falls in love with silent movie star Don Lockwood (Kelly), who is struggling to keep up with the film industry's transition into "talkies." The film is easily Reynolds' most well-known, and deservedly so. It's considered by many to be one of the best musicals ever made.

"Susan Slept Here" (1954)
In this risque romantic comedy, Reynolds plays 17-year-old juvenile delinquent Susan Landis who, through a series of unlikely circumstances comes to live with Hollywood screenwriter Mark Christophe (Dick Powell), who has writer's block after winning an Oscar and is working on a script about juvenile delinquents. It's charming, heartfelt and Reynolds is effortlessly wonderful in every moment.

"The Tender Trap" (1955)
In this romantic comedy, Reynolds stars as aspiring singer and actress Julie Gillis who meets womanizing theatrical agent Charlie Reader (Frank Sinatra). Charlie, who always keeps a lot of different female company, starts to fall for Julie until emotional complications arise with a former flame. The film, while often referred to as a Sinatra vehicle, works because of Reynolds' dynamic and vivacious performance.

"Bundle of Joy" (1956)
Reynolds stars as Polly Parish, a shop girl who rescues an abandoned baby. Scandal arises when her co-workers come to believe the baby is actually hers, and that the father is the son of the store owner, Dan Merlin (Eddie Fisher, Reynolds' then-husband and father of Carrie). This charming musical comedy earned Reynolds her second Golden Globe nomination for Best Actress in a Comedy of Musical. (She earned a previous nomination for Most Promising Newcomer for her role in the 1950 musical Three Little Words.)

"Tammy and the Bachelor" (1957)
In this sweet romantic comedy, Reynolds stars as a downhome country girl named Tambrey "Tammy" Tyree, who lives with her grandpa on a houseboat in Louisiana. Tammy rescues and befriending handsome pilot Peter Brent (Leslie Nielsen), who crashed his private plane near her home, and nurses him back to health. Peter invites Tammy to his family's plantation, where her sweet country persona clashes with Peter's high-brow family. The film won an Oscar for Best Song for the tune "Tammy," which went on to become Reynolds' biggest hit.

"The Unsinkable Molly Brown" (1964)
Reynolds scored her first (and somehow only) Oscar nomination for her role in this musical, which is based on the real-life story of Molly Brown, a boisterous, carefree country girl who marries a gold miner and later strikes it rich, making her fabulously wealthy. Despite this, she can't get respect from high-society snobs who snub her. However, Molly gains fame and respect when she becomes a hero while traveling on the Titanic. Molly got her "unsinkable" nickname for surviving the disaster and helping rescue many of fellow passengers. Reynolds' performance in this amazing biopic is second-to-none and full of an energy that radiates off the screen.

"Divorce, American Style" (1967)
In his satirical comedy about the difficulties of getting a divorce in modern times, Reynolds stars opposite Dick Van Dyke. The pair play Richard and Barbara Harmon, who discover they want to split up after 15 years of marriage because they are no longer happy. However, they discover that the challenges of getting a divorce -- including custody battles and counseling sessions and alimony negotiations -- make them even more unhappy than just being married. It's a dark yet hilarious look at the struggles of romance and dissatisfaction.

"Mother" (1996)
In this Albert Brooks-helmed dramedy, Reynolds stars as Beatrice Henderson, whose son Josh (Brooks) is getting divorced for a second time, and decided to move in with his mom in his childhood home in order to discover what happened in his life that lead to his many problems with women. The film earned Reynolds' her fourth and final Golden Globe nomination.