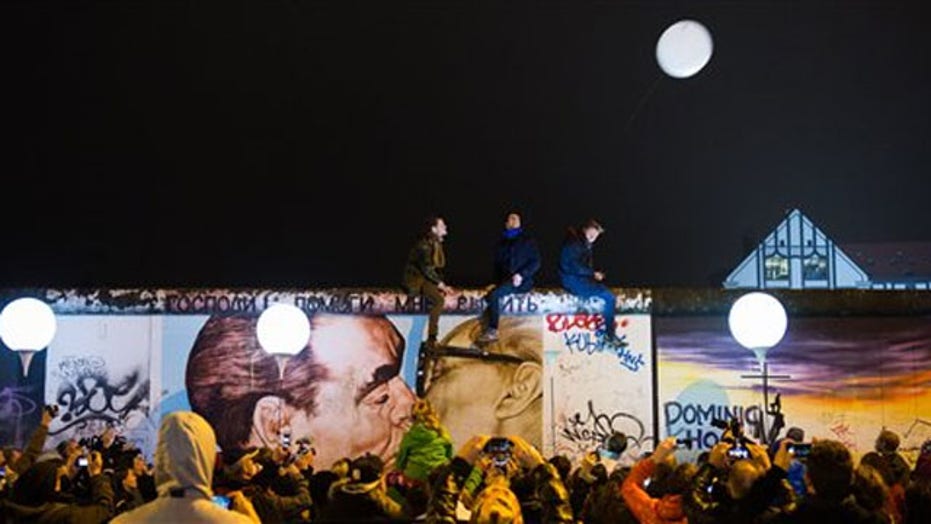 Commemorating 25 years since the fall of the Berlin Wall

It was cold. It was wet. It was amazing. In those heady days following the fall of the Berlin Wall, we were there as the first waves of East Germans poured through a breach in the barrier.

“There is so much here,” one said to me, his family in tow.

“This must be a very rich land,” another remarked.

Those of us lucky enough to be assigned the story knew we were covering a big chunk of history. There was too much joy and celebration all around to dwell on the politics.

A people who had been kept down and oppressed against their will by a communist Soviet regime were set free overnight.

Of course, that was just the beginning of eastern Germany’s long road to normalcy. But it had begun.

More than that, it set into motion a chain of events throughout eastern Europe and the former Soviet states that would change the world.

The end of the Cold War. The demise of Communism.

And so celebrations like the ones Sunday in Berlin marking the 25th anniversary of the fall of the wall were in order.

That Berlin Wall story was, in fact, my first assignment as a foreign correspondent. What a way to begin a reporting career. So, in a way, I am marking my own 25th anniversary as well.

The years that followed dealt with a lot of fallout from that cold night in November, including some pretty nasty moments: Soviet tanks menacing newly independent Lithuania, blood literally running through the European streets of the civil war-wracked Balkans.

9/11 happened and our focus shifted to terrorism and the militant Islamist threat, which led to two full-scale wars with young Americans thrown onto the front-lines against savage militants. Suicide car bombs, IEDs, RPGs and Al Qaeda dominated our vocabulary.

Our search for terror groups threatening the West in this post-Cold War world sent us into the mud buildings of Yemen, the murky bazaars of Mombassa, the tricky backstreets of Karachi.

Our pursuit of the new demons led us into the spider hole of Saddam, the drain pipe of Qaddafi and the compound of Usama bin Laden.

But we also found ourselves, for months this year, in the middle of a “new cold war” in Ukraine, in which Russia-backed separatists, with the full backing of a newly assertive Vladimir Putin, are flexing their muscles, poking AK-47s in our faces. All the while, achieving something for Moscow not even achieved at the height of the Cold War: annexation of territory.

Which is a warning that history can often repeat itself. That what goes around comes around. And that no one, anywhere, at any time can completely let their guard down.

But like those brave, bedraggled and dazzled East Germans, streaming through the gap in that Cold War concrete barrier 25 years ago, those seeking freedom still can in the end come out on top.

And we’ll be watching.