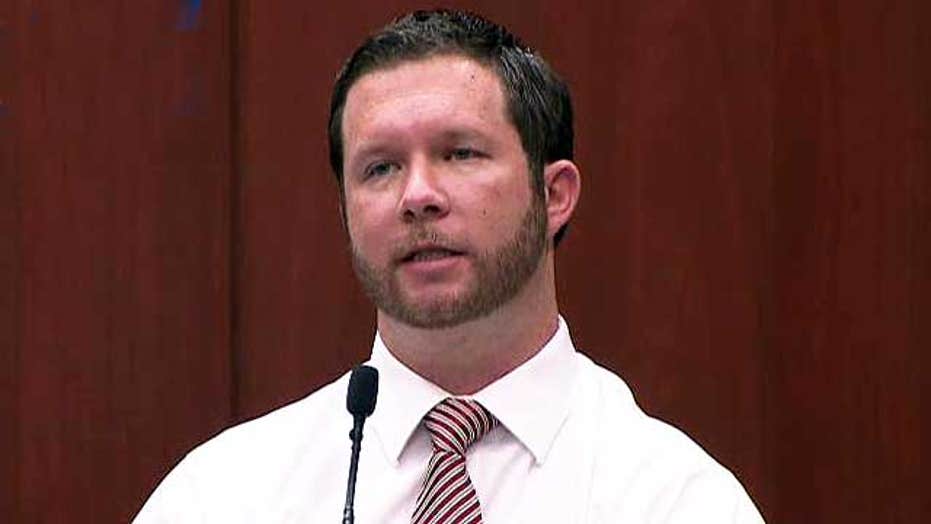 Man who lived in neighborhood takes the stand

A resident of the Florida community where George Zimmerman shot Trayvon Martin last year told jurors Friday afternoon how he encountered a bloodied Zimmerman immediately after the confrontation and took pictures of the murder defendant's injuries.

State witness Joe Manalo testified that he took the photos with his cell phone that showed blood on Zimmerman's lip and scalp.

"He had blood running down his nose from both nostrils and over his lips," Manalo told Prosecutor Bernie de la Rionda.

Manalo said Zimmerman asked him to call his wife, Shellie, and tell her that he just shot someone as cops arrived on the scene.

"He had a cell phone in his hand and he tossed it on the ground asking if I could call his wife," Manalo testified. "He gave me her number. I had a connection right away and said, 'Your husband has been involved in a shooting. He's detained by Sanford police.'"

"Just tell her I shot someone," Manalo recalled Zimmerman saying, and he did.

On cross-examination, defense attorney Don West read a transcript of what Manalo claims Zimmerman told him after the shooting.

"This guy was beating me up and I was defending myself. I shot him," the statement read.

West then asked Manalo, "George Zimmerman asked, 'Am I bleeding?'" Manalo confirmed that he did.

Manalo also confirmed his earlier statement that when the police officer asked him who shot Martin, Zimmerman replied immediately saying that he had.

Earlier on Friday, another neighbor, John Good, testified how he witnessed an MMA-style fracas between Zimmerman and Martin. He described seeing one person straddling another and throwing punches down at the person,which he described in a statement as a "ground and pound."

Good said he was watching TV with his wife when they heard a noise and he went out to investigate, despite his wife warning him not to. At first, he thought a dog might be attacking someone, but as he moved closer, he said he observed what looked like "a tussle" between two people.

"It looked like a tussle," Good said. "I could only see one person. At one point, I yelled out, 'What's going on? Stop it,' I believe.

Under questioning by De la Rionda, Good said one of the combatants was straddling a man lying face up on the pavement, and throwing punches. The testimony appeared to corroborate Zimmerman's claims that he shot the 17-year-old African-American with a legally registered gun in self defense, as he was being pummeled.

The testimony also would appear to corroborate Zimmerman's claims he was on the losing end of a violent confrontation when he fired the fatal shot.

But Good said he did not see the person on top slam the other one's head into the pavement. Zimmerman had wounds to his scalp following the confrontation.

Good, who went back inside and was calling 911 when he heard a gunshot, listened as an audio recording of his call was played in the courtroom.

"It looks like there's a black guy down, and he's dead," Good said on the call.

During cross examination, defense attorney Mark O'Mara asked Good to be more specific as to the exact positions of the two men on the ground and even demonstrated in the courtroom, asking for visual confirmation. He also asked what Good meant on the 911 call  when he said the person on top was engaged in an "MMA-style" move of "ground and pound". The witness also said during testimony that the person on the bottom was unable to move under a flurry of punches.

When O'Mara asked him if the person on top was Martin, Good said: "Correct, that's what it looked like."

During cross-examination, O'Mara got on his knees to recreate the fighting as he asked Good to walk him through it.

Good was also shown by O'Mara a picture of Martin in a 7-Eleven convenience store and said that the person on top during the struggle was wearing the same dark clothing in the image.

Questioning was then redirected back to the prosecutor.

De La Rionda asked Good if he used the term "ground and pound" in his statements to investigators or if it was a Sanford Police Department investigator who first used the term. Good replied that it was possible.

De La Rionda also used water bottles to help demonstrate the position of Zimmerman and Martin and even got Good to concede that he did not actually see punches thrown and that he "only saw downward movement" of arms.

The testimony came a day after the former neighborhood watch volunteer's attorney tried to demonstrate that the woman who was on the phone with Martin shortly before he was fatally shot was not believable because her story reportedly changed over the course of the last year.

Also on Friday, first responders from the Police and Fire and Rescue departments were called to the stand.

Officer Ricardo Ayala of the Sanford Police Department testified that upon arriving at the scene, Martin was discovered face down on the ground and Zimmerman was calm and did not show any resistance and was fully cooperative.

Fellow officer Tim Smith confirmed this during his testimony, saying that Zimmerman said to him as he approached the scene that he had shot Martin and was still armed while holding his arms up in the air. He added that he removed the gun and handcuffed him without incident.

Smith also said that Zimmerman claimed that he was calling for help and no one came to his rescue.

EMT Stacy Livingston of Sanford Fire and Rescue was also a first responder. She testified that Martin was determined dead at the scene and when asked by O'Mara if Zimmerman's injuries were consistent with a fist strike to the nose, she replied that it was very possible.

The final witness for the day was Lindzee Folgate, a physician's assistant who examined Zimmeman on the day after the shooting. She said that Zimmerman was taking MMA (mixed martial arts) lessons three days a week and that when she suggested that he see a psychologist, he mentioned that he was already seeing one.

Folgate also said that Zimmerman likely suffered a broken nose but couldn't say with certainty since x-rays did not show a fracture.

It appeared through their line of questioning that prosecutors wanted to prove that Zimmerman's injuries were neither life-threatening nor cause enough for him to fire his gun.

An attorney for Martin’s family declared on Thursday that the high-profile case was not about race.

Parks made the comments after prosecutors spent several days arguing that Zimmerman profiled the 17-year-old specifically because he was black. Asked why he changed his take on the matter, Parks replied: “We never claimed this was about race.”

Zimmerman, 29, has said he opened fire only after the teenager jumped him and began slamming his head against the concrete sidewalk. Zimmerman identifies himself as Hispanic and has denied that his confrontation with the black teenager had anything to do with race, as Martin's family and its supporters have claimed.

Zimmerman has pleaded not guilty, claiming self-defense. He could face life in prison if convicted.