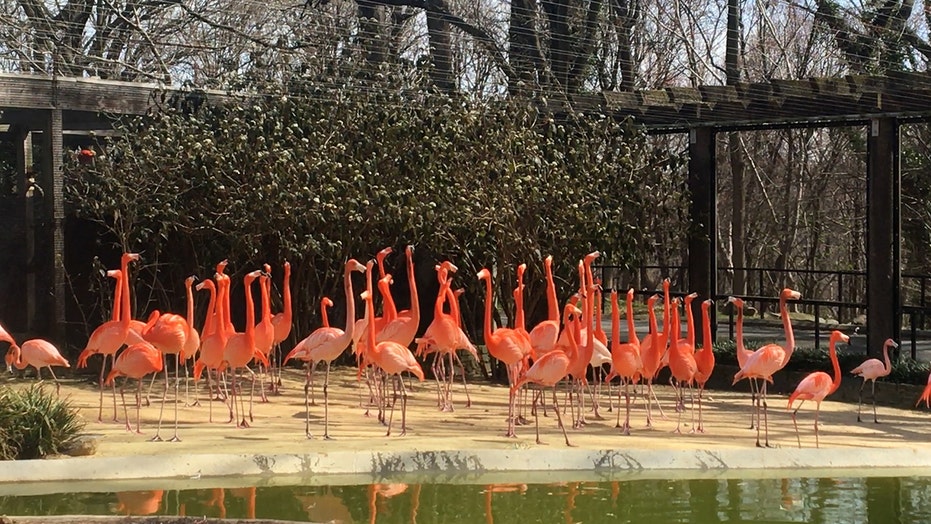 Staff at the Smithsonian’s National Zoo and Conservation Biology Institute’s Bird House discovered the dead birds and spotted the fox in the outdoor flamingo yards after arriving early Monday morning, the zoo said in a news release. Three other flamingos were injured and were receiving treatment.

"This is a heartbreaking loss for us and everyone who cares about our animals," said Brandie Smith, the John and Adrienne Mars Director at the zoo. "The barrier we used passed inspection and is used by other accredited zoos across the country. Our focus now is on the well-being of the remaining flock and fortifying our habitats."

The zoo's the flock of 74 American flamingos lived primarily outdoors in the 9,750 square-foot yard with a heated pool and barn. The wild fox killed 25 flamingos, a Northern pintail duck and injured three other flamingos. (National Zoo and Conservation Biology Institute)

The remaining flamingos of the flock were moved indoors to their barn while the ducks were moved to a covered and secure outdoor space, according to zoo officials.

An inspection following the incident revealed a new softball-sized hole in the heavy-duty metal mesh that surrounds the outdoor yard.

In response, the zoo has taken multiple actions including reinforcing metal mesh surrounding the yard, setting live traps to catch predators in the outdoor yard, and adding digital cameras with infrared sensors that are triggered by movement to record overnight activity.

The zoo is actively investigating the incident.

Before the fox attack, the flock of 74 flamingos lived primarily outdoors in the 9,750 square-foot yard with a heated pool and barn. The Bird House area is currently undergoing renovation and is closed to the public.

The American flamingo and Northern pintail duck are both listed as species of least concern on the International Union for Conservation of Nature’s Red List of Threatened Species.