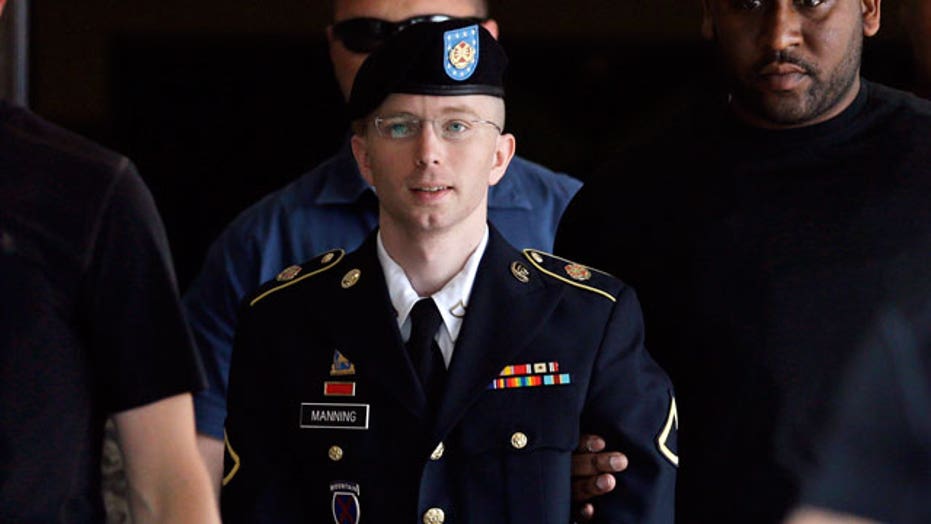 Bradley Manning set to be sentenced

One day after Army Pfc. Bradley Manning was found not guilty of aiding the enemy but convicted of other charges that can still amount to 138 years in prison, civil liberties groups tell The Washington Post that it's becoming increasingly likely that the U.S. will prosecute Julian Assange, the founder of the whistle-blowing website WikiLeaks.

Michael Ratner, the American attorney for Assange, told the paper that the government tried to connect Manning and his client and "that's a very bad sign about what the U.S. government wants to do to Julian Assange."

Ratner's opinion was shared by Trevor Timm, the executive director of the Freedom of the Press Foundation, who told the paper that the WikiLeaker's conviction on espionage charges brought Assange "one step closer" to prosecution.

In an interview with reporters in London following Manning's conviction on espionage and other charges, Assange said it was incumbent on every media organization to stand shoulder-to-shoulder with their sources against government efforts to prosecute leakers.

Assange spoke to reporters from the Ecuadorean Embassy, where he has been holed up for more than a year to avoid being extradited to Sweden on sex crimes allegations — or to the United States to be prosecuted for publishing government secrets.

Striking a somber tone in a dark suit and tie, the 42-year-old condemned the verdict handed down Tuesday, but he and others had long anticipated the Army analyst's conviction, arguing that the military justice system was stacked against him from the start.

Assange said he took no comfort from Manning's acquittal on the most serious charge — aiding the enemy — saying it was a "red herring" intended to distract from his conviction on nearly every other charge, including counts of espionage, theft and computer fraud.

"It can never be that supplying true information to the public is espionage," Assange insisted, describing the conviction as a hideous precedent that would spell the "end of national security journalism in the United States."

Assange also worried that judgment had helped lay the ground for his own eventual prosecution in the United States, adding that — although Manning himself admitted passing hundreds of thousands of classified documents to WikiLeaks — the group was still steering clear of claiming him as its source.
Nevertheless, he was full of praise for the young private, calling him a "hero" who'd put his liberty and his life on the line to expose wrongdoing.

He said that — despite dire American warnings of catastrophic damage dealt by the leaks — the U.S. had yet to identify a single person hurt by the leaks.

"Not a single person came to harm as the result of Bradley Manning's activities," he said. "The only victim was the U.S. government's wounded pride."

Manning, for his part, is scheduled for the sentencing phase of his trial on Wednesday, which is expected to continue for a few weeks.