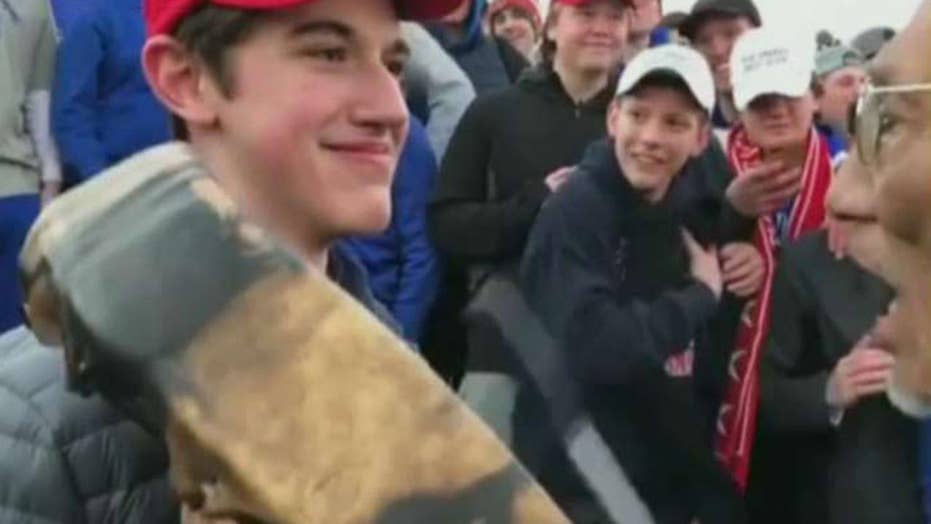 The Black Hebrew Israelites, members of which identify themselves as a historic religious group, has taken center stage after some of its members appeared to be part of a controversial confrontation at the Lincoln Memorial in Washington, D.C. over the weekend.

A video of high school students from Covington Catholic High School in Kentucky and Native American activist Nathan Phillips went viral. The students, who were in D.C. to participate in the March for Life, were initially accused of mocking Philips and faced immediate backlash for the alleged behavior.

But just hours after a Catholic diocese in Kentucky threatened to expel several high school students involved in the incident, new footage emerged showing tension developing before the confrontation. And conservatives argued the original clip didn't tell the whole story, with many noting members of the Black Hebrew Israelites appeared to instigate the incident.

In one of the varying versions of the story of the encounter he told media outlets, Phillips told The Detroit Free Press one of them spit toward the students. Others were "saying some harsh things," he said, and so he decided to "put [himself] in between that, between a rock and hard place."

"They also taunted an African-American student from my school by telling him that we would 'harvest his organs,'" he added.

Sandmann, who said one of the students asked a teacher chaperoning the trip for permission to "begin our school spirit chants" to drown out the hecklers, added he was trying to defuse the tense situation by remaining "motionless and calm."

He also denied taunting Phillips by making faces at him. Instead, he said he smiled at the protester "because I wanted him to know I was not going to become angry, intimidated or be provoked into a larger confrontation."

Following the confrontation, the religious group has been thrust into the spotlight for some of the members’ alleged behavior at the rally.

Here’s what to know about the Black Hebrew Israelites.

The Black Hebrew Israelites — sometimes called “Black Jews” “Black Hebrews” and “Hebrew Israelites,” according to Vox — are a controversial offshoot of an American religious movement known as Black Israelism, The Washington Post reported. The movement dates back to the 18th century, if not before.

More specifically, the movement is “rooted in Black Judaism,” according to the Southern Poverty Law Center, which noted the Black Judaism doctrine states “when the Kingdom of Israel was destroyed, the Israelites were first scattered across the African continent and then selectively targeted by enemy African tribes who captured and sold them to European slave traders for bondage in the New World.”

The principles of the Black Hebrew Israelites vary: the group does not appear to have an official creed. In fact, Lewis Gordon, a professor of Africana philosophy at the University of Connecticut, told The Philadelphia Inquirer some sects within the movement “identify as Jews, as Christians, and as neither.”

Some who identify with the group read the Christian bible, while others read the Hebrew Bible. Some believe Jesus was the Messiah while others do not, according to The Post. Overall, there are dozens of Black Hebrew organizations. Many members continue to follow the teachings of a rabbi who founded a congregation in Harlem, New York, in 1919, according to a 2000 report in The New York Times.

However, one belief appears to hold true for the majority of those who identify as Black Hebrew Israelites: African Americans “are the literal descendants of the Israelites of the Bible and have been severed from their true heritage,” The Post reported.

How many Black Hebrew Israelites are in the U.S.?

The non-profit organization Christian Apologetics & Research Ministry, or CARM, estimated there are “approximately 200,000 among the dozens of offshoot branches.” In 2000, The New York Times reported a range of 40,000 to 500,000 across the U.S. — but noted “an accurate counting [is] made impossible by the diversity of styles and beliefs.”

What is the sect known as “One West”?

The Post reported a branch known as One West began to form in the 1970s and 1980s, or in the years after the civil rights and Black Power movements.

One Westers, according to The Post, “saw themselves as radical reformers of earlier generations of Hebrew Israelites who had gone astray. They would troop out to street corners dressed in colorful and ornate capes and leather — vivid imaginings of what ancient Israelites might look like transported into the urban culture of New York City. They were also early and eager adopters of new media, hosting local television slots and filming their often-confrontational street ministry.”

Members of the One West group believe Native Americans and Hispanics, in addition to African Americans, are descendants of the Israelites or the original 12 Tribes of Israel. One prominent offshoot on One West is a group known as House of Israel (HOI).

Vox reported this sect of Black Israelites are often seen as the “fringe sect” and are known for their “highly confrontational form of street ministry” commonly seen in large cities such as Washington, D.C. and New York.

Members of HOI were reportedly present at the Lincoln Memorial confrontation over the weekend.

Some Black Israelite groups, such as HOI, have been labeled as “hate groups” by organizations like the Southern Poverty Law Center. The SPLC reported in 2008 that while most “Hebrew Israelites are neither explicitly racist nor anti-Semitic and do not advocate violence, there is a rising extremist sector within the Hebrew Israelite movement whose adherents believe that Jews are devilish impostors and who openly condemn whites as evil personified, deserving only death or slavery.”

Fox News' Gregg Re and Samuel Chamberlain contributed to this report.