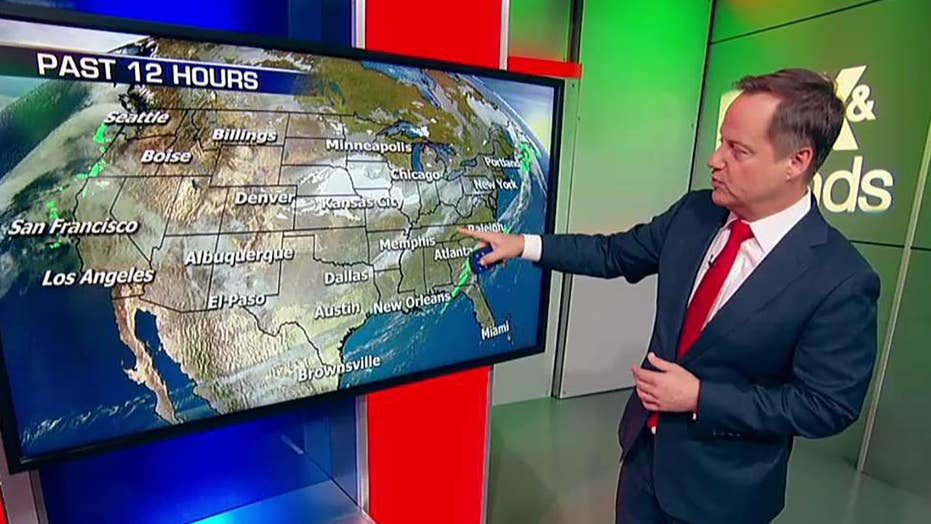 If you live in the Northeast or Midwest, you're not dreaming: It's probably going to be a white Christmas.

But the trade-off is hazardous driving conditions across New England and the Great Plains. Out west, the Rocky Mountains have been pounded this weekend.

The storm system attacking the Mississippi River and to the east started in Nebraska, swept across Iowa and will dump several inches of snow on Chicago. Aside from a lake-effect dump of as much as 4 inches, accumulation in the nation's third-largest city will be slightly less than predicted, said Ricky Castro, a meteorologist with the National Weather Service. It's headed for the East Coast Sunday night to dump more through midday on Christmas.

It's a welcome site for snow-lovers in a season short on the white stuff -- just over 2 inches previously in Chicago, Castro said.

A worker clears snow from field lines at Soldier Field during an NFL game between the Chicago Bears and Cleveland Browns in Chicago on Sunday. (AP Photo/Charles Rex Arbogast)

"It's a more wintry feel for Christmas Eve and Christmas Day, with a cold week ahead," Castro said.

Despite the whiteout conditions at Soldier Field along Lake Michigan, the Chicago Bears slid to their fifth victory of the season over the winless Cleveland Browns.

No injuries or deaths had been reported because of the weather, but travel was hazardous. Most of Indiana was under winter weather advisory with officials urging motorists to stay put unless they absolutely had to travel. Northern Indiana was expecting up to 5 inches with slightly less in the southern part of the state.

O'Hare and Midway international airports in Chicago were reporting minor delays averaging 15 minutes. Arriving flights at O'Hare were delayed by an average of 80 minutes by late in the afternoon Sunday. Detroit Metropolitan Wayne County Airport was experiencing gate delays of about 15 minutes.

New England could get up to 8 inches of snow. Forecasters say the storm will sweep across the region late Sunday until midday on Christmas. Strong winds are predicted for Massachusetts, Connecticut and Rhode Island with gusts up to 65 mph.

"Along the coast, New York could end up with wet snow, but areas inland could see substantial snowfall," Castro said.

Snow on the road near Yelm, Wash., on Sunday. (Steve Bloom/The Olympian via AP)

Mountain areas in parts of Colorado, Montana and Wyoming received more than 1 foot of snow, which started Saturday. It was good news for holiday skiers and resorts which have struggled with a slow start this season.

But it meant a heightened warning of avalanches in higher elevations outside of ski areas.

In Washington state, forecasters said 1 to 3 inches of snow could be on the ground by Christmas morning in parts of the state.