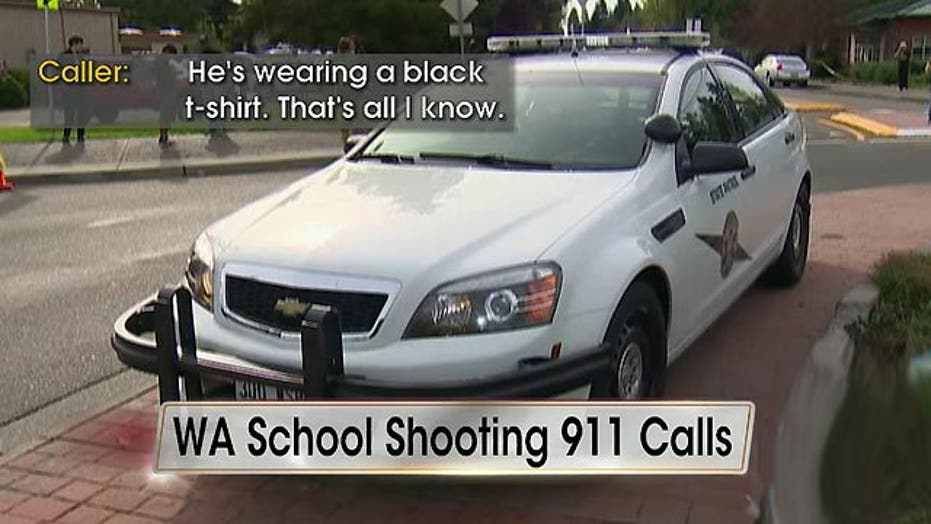 Investigators released dozens of 911 calls related to last month's deadly shooting at a Washington state high school, including one from a teacher who said she was standing next to the 15-year-old gunman.

"I have the shooter. One shooter," Megan Silberberger told the operator. "Blood is everywhere. I need help. I need help now."

Other witnesses to the Oct. 24 shooting at Marysville-Pilchuck High School have called Silberberger, a first-year social studies teacher, a hero for trying to intervene when freshman Jaylen Fryberg opened fire on a group of his friends, killing four of them before taking his own life. The series of calls from students, parents, neighbors, and school workers revealed the trauma of the situation but also the teacher's attempts to save lives.

She described his clothes, but did not know anything else about him.

Students who fled the scene also reported the shooting to 911, describing how they dropped to the ground or bolted from the building.

"I just ran out of the school," one student told the operator.

A woman who lives next to the school, about 30 miles north of Seattle, called to report that a group of students had climbed over her fence and were hiding at her house. She told the operator that several of the students had witnessed the shooting and asked how long they should stay inside. The operator advised her to hold tight until the police could arrive to interview them.

Parents who received calls or texts from their children were frantic for information. One father said his son just sent a text reporting shots fired. The operator confirmed that they knew about it but could not provide any additional information.

"Well, we're going down there," the father said before hanging up.

A crying mother called to report a text from her daughter, but when the operator tried to comfort her by saying police were on the way, it didn't help.

"My daughter is not following lock-down directions and she and other kids have run from their classroom," the woman said. "She's away from her classroom right now. What advice can I give her?"

A food-service worker named Anne Haughian told the operator that she had just guided students out the cafeteria's side door. She said she saw a boy come in before the shots rang out, but did not see what happened next, adding "it happened so fast." Instead, she said she rushed the students out of the room to safety.

But one student was not with her. Her daughter.

"You're outside right?" the operator asked.