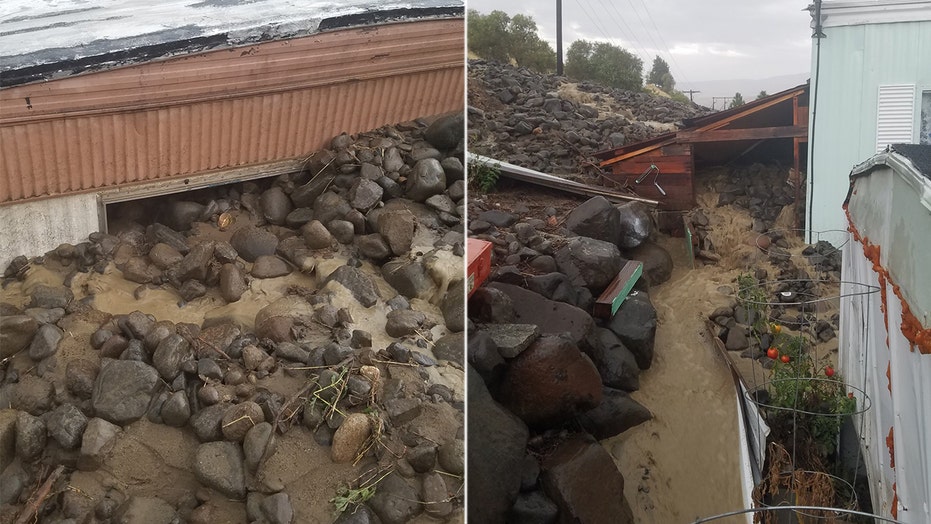 A heavy thunderstorm Saturday in central Washington state spawned flash floods and a mudslide in one community that left several homes uninhabitable.

The Chelan County Sheriff's Office said in a news release that dispatchers received a call shortly after 5 p.m. about a thunderstorm with "strong lightning" that was creating dangerous conditions in Squilchuck Canyon, located southwest of Wenatchee.

The force of the water caused a nearby hillside to eventually give way, forcing what the sheriff's office described as a "massive amount of rock and mud" down into a development of single-wide mobile homes.

"Extremely heavy rain" from a thunderstorm caused mud and debris flows in the Squilchuck Canyon in Washington state on Saturday, according to officials. (Chelan County Sheriff's Office)

"A river of mud, rock and other debris impacted the north side of three mobile homes nearly to the roof lines," the sheriff's office said. "Children were carried out of one home by deputies and Wenatchee police officers."

Three homes were left uninhabitable after a mudslide in a community in Washington state on Saturday. (Chelan County Sheriff's Office)

Photos posted by the sheriff's office showed the debris that impacted the homes. Three of the structures were deemed uninhabitable, officials said.

Officials said the flow of water, rock and other debris began to slow by 6 p.m. Due to additional rain in the forecast on Saturday night, residents of 16 homes were advised to stay out of the area until the storm completely subsided.

California mudslides: What makes them so destructive?

This animated video explains how mudslides can be so destructive after the recent spate of deadly wildfires.

Engineers from Chelan County Public Works and road crews responded and began assessing the slope and clearing the affected roadways, according to officials. The local Red Cross office also contacted residents affected by the mudslide.

The National Weather Service, Seattle tweeted that a low-pressure system was causing the rain and thunderstorms across the region over the weekend.

Elsewhere in Washington state, the heavy rain caused mudslides on State Route 410 east of Chinhook Pass, according to the state's department of transportation.

No injuries were reported in any of the incidents.