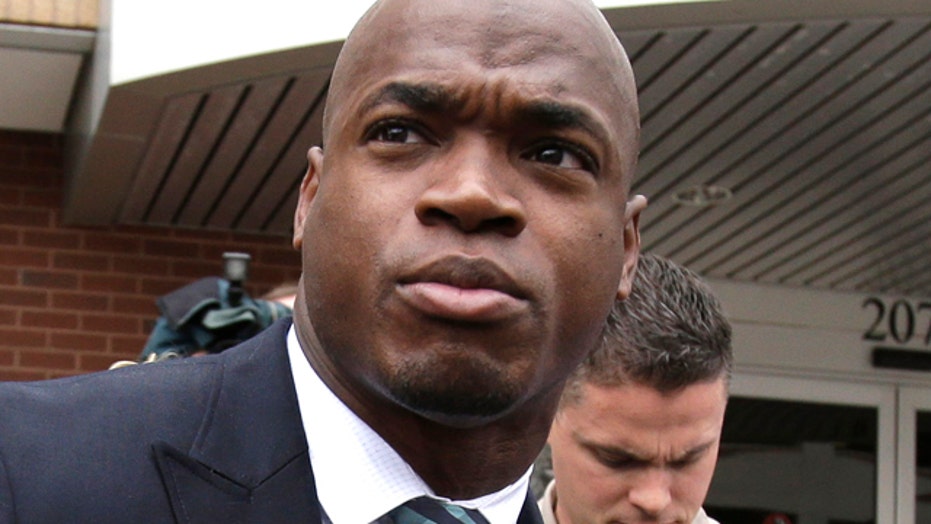 Peterson pleaded no contest to a misdemeanor charge of reckless assault under the deal that Montgomery County state District Judge Kelly Case approved during a court hearing. A no contest plea isn't an admission of guilt but is treated as such for sentencing.

The All-Pro running back was indicted in September on a felony charge of injury to a child for using a wooden switch to discipline his 4-year-old son earlier this year in suburban Houston. The case revived a debate about corporal punishment, which is on the decline in the U.S. but still widely practiced in homes and schools.

"I truly regret this incident. I take full responsibility for my actions," Peterson told reporters after accepting the plea deal. "I'm just glad this is over and I can put this behind me."

While the case was pending, he was not allowed to have contact with his son. Peterson and his attorney said he is looking forward to getting back to having a relationship with the boy.

"Adrian wants to get on with his life, have a relationship with his son and get back to playing football."

Peterson has been on paid leave from the Vikings under a special exemption from the NFL commissioner to take care of his legal problems. It was not immediately clear how the plea deal would affect his playing status.

"We will review the matter, including the court record, and then make a determination on his status," NFL spokesman Brian McCarthy said. "We cannot provide a timetable."

Peterson has said he never intended to harm his son and was disciplining him in the same way he had been as a child growing up in East Texas. The boy suffered cuts, marks and bruising to his thighs, back and on one of his testicles, according to court records.

Peterson had tentatively been set to go on trial Dec. 1. If convicted of felony child abuse, Peterson could have faced up to two years in prison and a $10,000 fine. Instead, he received what is essentially probation, was fined $4,000 and must complete parenting classes and perform 80 hours of community service.

Montgomery County District Attorney Brett Ligon said this was the best resolution of the case and that Peterson did not get any special treatment because he's a professional athlete.

Last month, a visiting judge denied a request by prosecutors to remove Case as judge in the case. Prosecutors had accused Case of being biased against them and wanted a new judge appointed.

The plea deal made moot a pending motion by prosecutors to revoke Peterson's $15,000 bond for alleged marijuana use.

Corporal punishment is legal in every state. The Texas Attorney General's Office notes that belts and brushes "are accepted by many as legitimate disciplinary 'tools,'" but "electrical or phone cords, boards, yardsticks, ropes, shoes, and wires are likely to be considered instruments of abuse."

Texas law says the use of non-deadly force against someone younger than 18 is justified if a parent or guardian "reasonably believes the force is necessary to discipline the child or to safeguard or promote his welfare."