The Camp Fire is on track to be California's deadliest wildfire; Claudia Cowan reports from Paradise, California.

A California utility company reportedly emailed a woman in Northern California a day before the deadly wildfire broke out, saying they were "having problems with sparks" and needed access to her property.

Betsy Ann Cowley, 31, said Pacific Gas & Electric Co. told her that power lines were causing sparks. She said workers visited her property but she said she wasn’t there Wednesday and was not aware of their findings.

The cause of the fire is still under investigation, but the Camp Fire started Thursday near Cowley’s property in the tiny mountain town of Pulga, which neighbored Paradise, a town that’s since been incinerated.

The death toll for the wildfires burning in northern California's Camp Fire rose to 42 people Monday night — making it the deadliest wildfire ever in the state, officials said.

Authorities announced that 13 more bodies were found during searches on Monday. The death toll is expected to continue to rise.

Fire investigators on Monday declared a crime scene the area surrounding power lines on Cowley’s property in an oak-filled canyon.

Cowley was back at the property Monday. 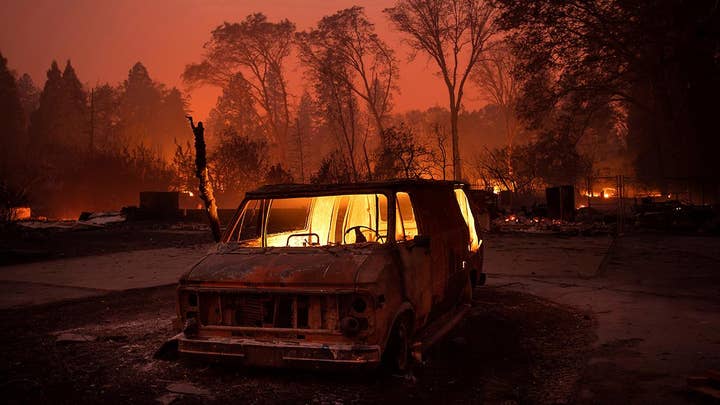 PG&E said it has provided an "initial electric incident report" with state regulators and will fully cooperate with any investigations.

Paul Doherty, PG&E spokesman, also told The San Francisco Chronicle that the company had no immediate comment about the email Cowley discussed.

“We’re not going to speculate or comment on what factors may or may not be impacting the market,” Doherty said in an email to The Chronicle. “Right now, our entire company is focused on supporting first responders and assisting our customers and communities impacted by the Camp Fire.”

The utility company has publicly said it experienced a problem on an electrical transmission line near the site of the massive fire early Thursday, minutes before the blaze broke out.

In PG&E’s Friday filing to the state Public Utilities Commission, the company said it has notified the commission about the equipment problem, KQED-TV reported.

The company said a subsequent aerial inspection detected damage to a transmission tower on the line.

PG&E could face as much as $5 billion in liabilities from the Camp Fire, The Chronicle reported, citing an estimate from Susquehanna Financial Group.

“I just approved an expedited request for a Major Disaster Declaration for the State of California. Wanted to respond quickly in order to alleviate some of the incredible suffering going on. I am with you all the way. God Bless all of the victims and families affected,” Trump said on Twitter.