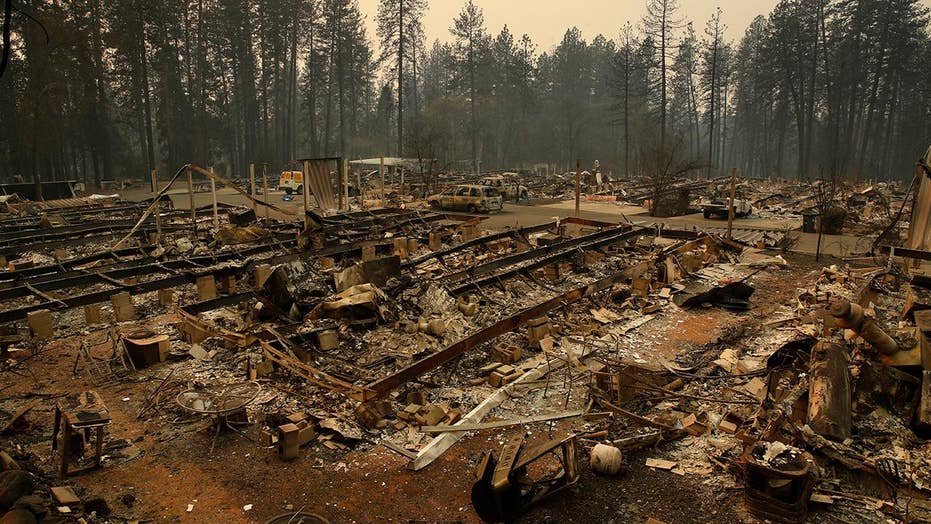 Paradise, California left in ruins from the Camp Fire

42 dead, over 200 missing and 52,000 evacuated in Northern California; Claudia Cowan reports from Paradise.

The death toll for the wildfires burning in northern California's Camp Fire rose to 42 people Monday night — making it the deadliest wildfire ever in the state, officials said.

Authorities announced that 13 more bodies were found during searches on Monday. The death toll is expected to continue to rise.

The dead were found in burned-out cars, in the smoldering ruins of their homes, or next to their vehicles, apparently overcome by smoke and flames before they could jump in behind the wheel and escape. In some cases, there were only charred fragments of bone, so small that coroner’s investigators used a wire basket to sift and sort them.

“I just approved an expedited request for a Major Disaster Declaration for the State of California. Wanted to respond quickly in order to alleviate some of the incredible suffering going on. I am with you all the way. God Bless all of the victims and families affected,” Trump said on Twitter.

The fires have caused major havoc throughout the western state.

All told, more than 8,000 firefighters statewide were battling wildfires that destroyed more than 7,000 structures and scorched more than 325 square miles, the flames feeding on dry brush and driven by blowtorch winds.

Earlier Monday, the Northern California wildfire matched at 29 the deadliest single fire on record - a 1933 blaze in Griffith Park in Los Angeles. A series of wildfires in Northern California's wine country last fall killed 44 people and destroyed more than 5,000 homes.

The search for bodies continued Monday.

As the search for victims dragged on, friends and relatives of the missing called hospitals, police, shelters and the coroner's office in hopes of learning what became of their loved ones. Paradise was a popular retirement community, and about a quarter of the population was over 65.

Hundreds of people were unaccounted for by the sheriff's reckoning, four days after the fire swept over the town of 27,000 and practically wiped it off the map with flames so fierce that authorities brought in a mobile DNA lab and forensic anthropologists to help identify the dead.

The cause of the Southern California fires remained under investigation, and Osby said nothing had been ruled out.

At least two people have been killed and 370 homes have been destroyed in the fires that erupted last week west of downtown Los Angeles. It is likely that crews assessing damage will discover hundreds of more homes lost in the canyons and steep hillsides in inland and coastal areas, Los Angeles County Fire Chief Daryl Osby said.

More than 200,000 people were still under evacuation orders even as some residents were allowed to return to inland communities of Agoura Hills, Westlake Village, and Newbury Park.

Osby emphasized that about 57,000 homes have been saved from the so-called Woolsey fire, which burned a path about 20 miles long and 14 miles wide — from northwest of Los Angeles through suburbs and the Santa Monica Mountains to the Malibu coast.

The death toll stood at two, a pair of adults found last week in a car overtaken by flames in Malibu. Those fatalities added to California’s growing wildfire-related death toll.

Trump received major backlash two days ago when after he issued an emergency declaration to provide funds to help firefighters in California as they battled at least three major wildfires across the state, the president threatened to withhold federal payments — citing the state’s “gross mismanagement” of its forests.

Tweeting from Paris early Saturday, Trump wrote that ”there is no reason for these massive, deadly and costly fires in California.” He added that “billions of dollars are given each year, with so many lives lost, all because of gross mismanagement of the forests. Remedy now, or no more Fed payments!”