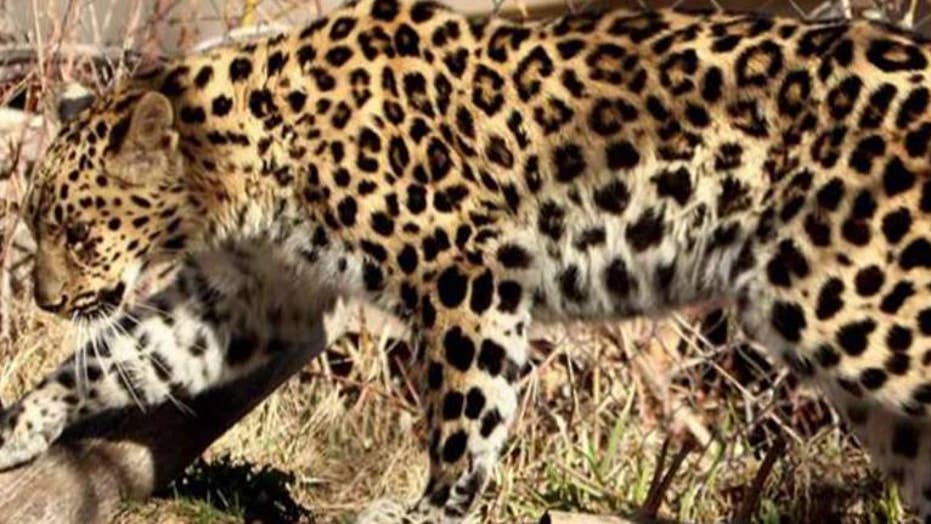 Officials investigating how cat got out of enclosure

When she got word of a leopard on the loose at the zoo in Salt Lake City, Katie Boender ducked into the nearest building with her group of preschool students: A bathroom.

They spent the next 30 minutes holed up there as an emergency team tranquilized the rare animal that escaped from an enclosure Tuesday morning.

The big cat was perched close to home, sleeping on a wooden support beam right above where people would have clustered to watch her.

A visitor spotted the 4-year-old female shortly after the Hogle Zoo opened, spokeswoman Erica Hansen said. After zookeeper raised the alarm, workers communicating on radios fanned out to shoo visitors to the nearest buildings under a protocol they practice several times a year.

Diggy Hicks-Little of Guildford, England said a group of employees stood guard with mops and brooms outside the reptile house where she waited with her family.

"I don't think you can really comprehend the fact that you might come face to face with a leopard," she said.

The animal left visible claw marks on the wooden perch as she hung on briefly before the dart took full effect, but after she was sedated she was transported quickly to a back room.

No one was hurt, and the Amur leopard is expected to be fine after the tranquilizer wears off, said Nancy Carpenter, associate director of animal health at the zoo.

Visitors said the situation played out calmly, and many returned to the zoo when it re-opened after about an hour. Authorities said they were lucky it happened early, before the zoo was full of visitors, and that the cat was asleep when she was found.

"This was the perfect scenario," Carpenter said.

The situation caused a stir on social media, sparking a parody Twitter account HogleZooLeopard that started with the words: "I'm finally free!"

Officials are investigating how the leopard managed to get escape the tall steel-grade mesh that surrounds the top and sides of her enclosure.

It's not clear how long she was out, but zoo staff saw her inside the enclosure at about 7 a.m. and the escape was reported about two and half hours later.

The leopard named Zeya is a petite, 60-pound animal that has only been at the zoo for a few years. She was brought in from a sanctuary in England to mate with the zoo's other Amur leopard, Hansen said. He is in a separate enclosure and did not escape

Amur leopards are considered critically endangered, according to the conservation organization World Wildlife Fund. There are only about 60 of them left in the wild.

Hansen said it is rare for animals to get loose at the zoo. In 2006, the zoo was evacuated when a gray wolf scaled the wall of her pen. The animal was shot with a tranquilizer dart and captured within zoo boundaries after about an hour. No one was hurt.

In 1999, three chimpanzees at the Salt Lake City Zoo escaped through an unlocked enclosure door and attacked and injured two zoo workers. They fired shotguns at two of the chimps, which were then euthanized. A third chimp was relocated to a Kansas zoo. The U.S. Department of Agriculture issued a mild reprimand to the zoo for failing to keep the enclosure secured.

The zoo hasn't had chimpanzees since, Hansen said.

Last month, a zoo in Cincinnati shot and killed a gorilla when a young boy got into its exhibit and was dragged by the 400-pound animal.

While the Utah leopard was quickly contained, if the animal had actively threatened people zoo officials would have used lethal force, Carpenter said.

The U.S. Department of Agriculture last inspected the Hogle Zoo on May 3 and found no violations.