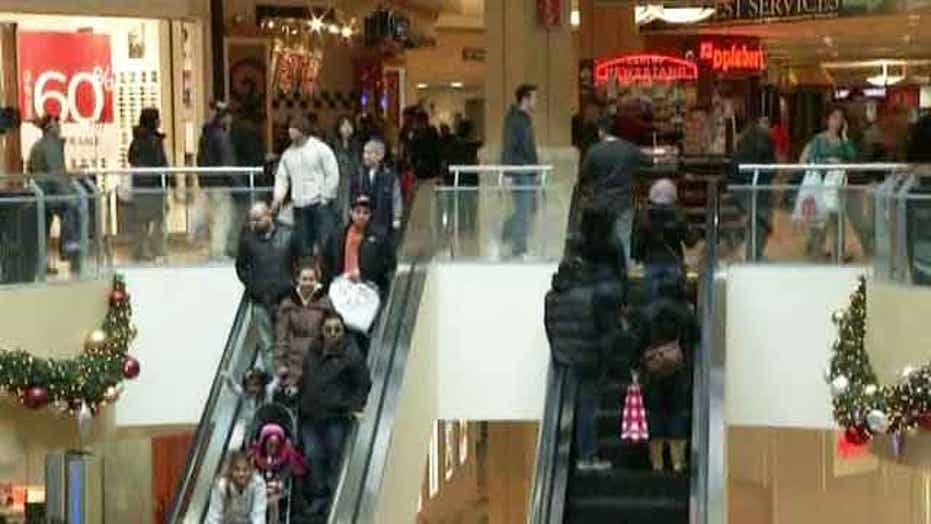 WASHINGTON – U.S. holiday retail sales this year were the weakest since 2008, when the nation was in a deep recession. In 2012, the shopping season was disrupted by bad weather and consumers' rising uncertainty about the economy.

A report that tracks spending on popular holiday goods, the MasterCard Advisors SpendingPulse, said Tuesday that sales in the two months before Christmas increased 0.7 percent, compared with last year. Many analysts had expected holiday sales to grow 3 to 4 percent.

In 2008, sales declined by between 2 percent and 4 percent as the financial crisis that crested that fall dragged the economy into recession. Last year, by contrast, retail sales in November and December rose between 4 percent and 5 percent, according to ShopperTrak, a separate market research firm. A 4 percent increase is considered a healthy season.

Shoppers were buffeted this year by a string of events that made them less likely to spend: Superstorm Sandy and other bad weather, the distraction of the presidential election and grief about the massacre of schoolchildren in Newtown, Connecticut. The numbers also show how Washington's current budget impasse is trickling down to Main Street and unsettling consumers. If Americans remain reluctant to spend, analysts say, economic growth could falter next year.

"A lot of the Christmas spirit was left behind way back in Black Friday weekend," Cohen said, referring to the traditional retail rush the day after the Thanksgiving holiday in late November. "We had one reason after another for consumers to say, `I'm going to stick to my list and not go beyond it."'

Holiday sales are a crucial indicator of the economy's strength. November and December account for up to 40 percent of annual sales for many retailers. If those sales don't materialize, stores are forced to offer steeper discounts. That's a boon for shoppers, but it cuts into stores' profits.

Last-minute shoppers like Kris Betzold, of Carmel, Indiana, embraced discounts that were available before Christmas.

"We went out yesterday, and I noticed that the sales were even better now than they were at Thanksgiving," said Betzold while shopping Monday at an upscale mall in Indianapolis. Betzold, who said the sluggish economy prompted her and her husband to be more frugal this year, noted that she saved about $25 on a Kindle Fire she found at Best Buy.

Spending by consumers accounts for 70 percent of overall economic activity, so the eight-week period encompassed by the SpendingPulse data is seen as a critical time not just for retailers but for manufacturers, wholesalers and companies at every other point along the supply chain.

The SpendingPulse data include sales by retailers in key holiday spending categories such as electronics, clothing, jewelry, luxury goods, furniture and other home goods between Oct. 28 and Dec. 24. They include sales across all payment methods, including cards, cash and checks.

It's the first major snapshot of retail sales during the holiday season through Christmas Eve. A clearer picture will emerge next week as retailers like Macy's and Target report revenue from stores open for at least a year. That sales measure is widely watched in the retail industry because it excludes revenue from stores that recently opened or closed, which can be volatile.

Despite the weak numbers out Tuesday, retailers still have some time to make up lost ground. The final week of December accounts for about 15 percent of the month's sales, said Michael McNamara, vice president for research and analysis at MasterCard Advisors SpendingPulse. As stores offer steeper discounts to clear some of their unsold inventory, they may be able to soften some of the grim results reflected in Tuesday's data.

Still, this season's weak sales could have repercussions for 2013, he said. Retailers will make fewer orders to restock their shelves, and discounts will hurt their profitability. Wholesalers, in turn, will buy fewer goods, and orders to factories for consumer goods will likely drop in the coming months.

In the run-up to Christmas, analysts blamed the weather and worries about the "fiscal cliff" for putting a damper on shopping. Superstorm Sandy battered the Northeast and mid-Atlantic states in late October. Many in the New York region were left without power, and people farther inland were buried under feet of snow. According to McNamara, the Northeast and mid-Atlantic account for 24 percent of U.S. retail sales.

Buying picked up in the second half of November as retailers offered more discounts and shoppers waylaid by the storm finally made it into malls, he said.

But as the weather calmed, the threat of the "fiscal cliff" picked up. In December, lawmakers remained unable to reach a deal that would prevent tax increases and government spending cuts set to take effect at the beginning of 2013. If the cuts and tax hikes kick in and stay in place for months, many economists expect the nation could fall back into recession.

The news media discussed this possibility more intensely as December wore on, making Americans increasingly aware of the economic troubles they might face if Washington is unable to resolve the impasse. Sales never fully recovered, Cohen said.

The results were weakest in areas affected by Sandy and a more recent winter storm in the Midwest. Sales declined by 3.9 percent in the mid-Atlantic and 1.4 percent in the Northeast compared with last year. They rose 0.9 percent in the north central part of the country.

The West and South posted gains of between 2 percent and 3 percent, still weaker than the 3 percent to 4 percent increases expected by many retail analysts.

Online sales, typically a bright spot, grew only 8.4 percent from Oct. 28 through Saturday, according to SpendingPulse. That's a dramatic slowdown from the online sales growth of 15 to 17 percent seen in the prior 18-month period, according to the data service.

Online sales did enjoy a modest boost after the recent snowstorm that hit the Midwest, McNamara said. Online sales make up about 10 percent of total holiday business.