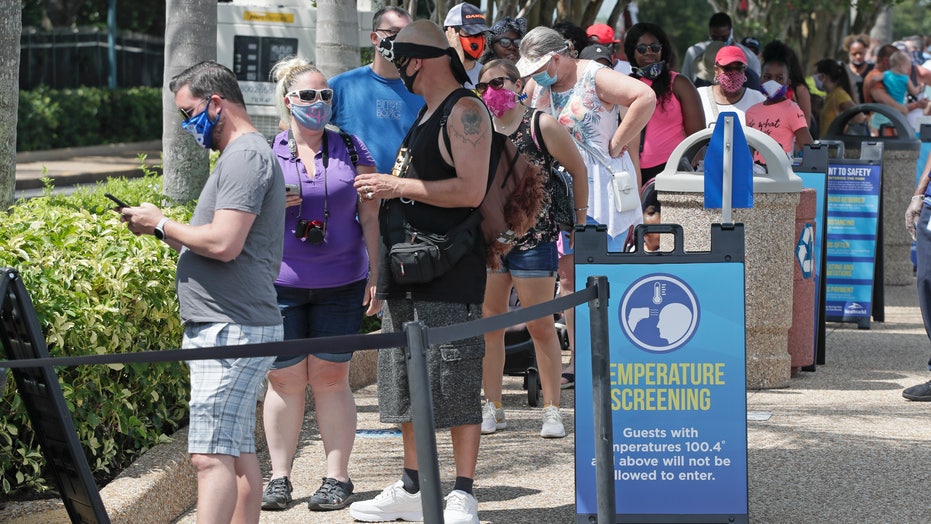 U.S. coronavirus deaths could surpass 200,000 by the beginning of October, as infections have spiked in parts of the country while numbers dropped in Europe, according to a report on Monday.

The Institute for Health Metrics and Evaluation (IHME) at the University of Washington raised its Oct. 1 estimate by 18 percent from 169,890 to 201,129 fatalities due to COVID-19, which they related to eased social distancing and reopening measures, according to Reuters.

"It is increasingly clear that COVID-19’s toll will extend beyond the summer months in the Northern Hemisphere, and current epidemics could easily worsen as the Southern Hemisphere nears its winter season," the IHME said on its website.

US CORONAVIRUS DEATHS COULD DOUBLE, HIT 200,000 BY SEPTEMBER: REPORT

Guests wait in line to have their temperature taken before entering SeaWorld as it reopens with new safety measures in place, Thursday, June 11, 2020, in Orlando, Fla. The park had been closed since mid-March to stop the spread of the coronavirus. (AP Photo/John Raoux)

The institute said Florida would be among the hardest-hit states, with a projected 18,675 deaths, after it saw 2,000 new coronavirus cases for two straight days over the weekend. The state recorded record high cases reported over a 24-hour period on Saturday and high case numbers also on Sunday.

Florida's projected total was up 186 percent from a previous estimate of just 6,559 on June 10. The state health department reported an additional 1,758 new cases by late Monday morning.

The newly revised projection comes as Ashish Jha, head of Harvard's Global Health Institute, previously said fatalities from the virus would nearly double in the U.S. by the fall unless action was taken to limit its spread.

“Even if we don’t have increasing cases, even if we keep things flat, it’s reasonable to expect that we’re going to hit 200,000 deaths sometime during the month of September,” Jha told CNN on Wednesday, according to Reuters. “And that’s just through September. The pandemic won’t be over in September.”

Jha told "Bill Hemmer Reports" Monday that the increase in coronavirus cases and hospitalizations across multiple states were a "real concern."

"What we saw was, around Memorial Day, the country started to open up and some states were in pretty good shape and eventually opened very slowly," Jha told host Bill Hemmer. "Other states already had a lot of cases and they opened pretty rapidly, and what I think we're seeing is a mix of some of that higher levels of cases and some outbreaks."

He said recommended steps to limit the spread of the virus include contract tracing, increased testing, mask usage, and continued social distancing.

In the U.S., all 50 states plus the District of Columbia have reported confirmed cases of COVID-19, tallying more than 2,113,488 illnesses and at least 116,122 deaths, according to data from Johns Hopkins.