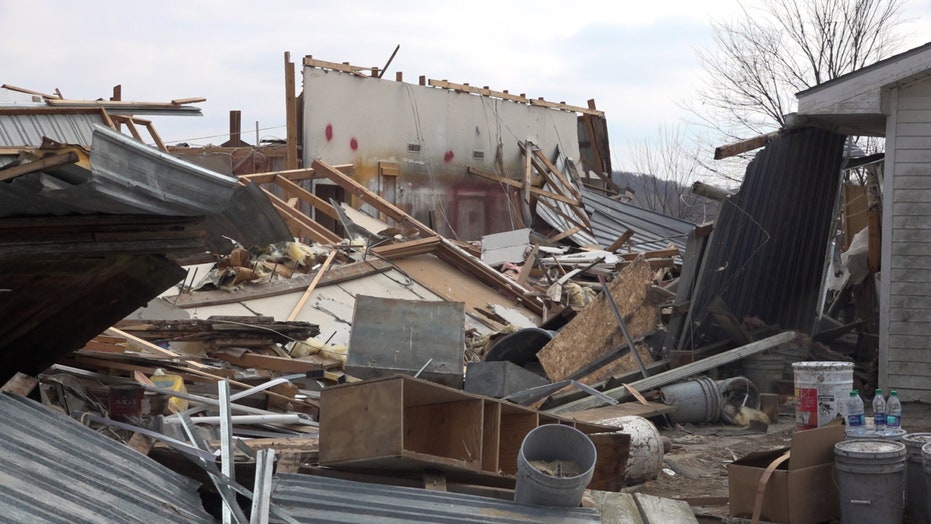 Towns in Iowa look to recover after tornado kills at least 7, damages over 50 homes

Some people in Iowa are trying to salvage what’s left of their homes and lives after a tornado ripped through Saturday afternoon. At least 7 people died, including 2 children under 5 years old.

Winterset, Iowa – Some people in Iowa are trying to salvage what’s left of their homes and lives after a tornado ripped through Saturday afternoon. At least 7 people died, including 2 children under 5 years old.

Hundreds of volunteers helped pick up debris and give out food and water to victims Sunday. Efforts to clean up were stalled Monday after a winter storm left 3-4 inches of snow on the ground.

The people whose homes were damaged say it’s nothing in comparison to the loss of life.

Josie Beeson said she spent over 8 years in her home that was destroyed. She said it's hard to see a place full of memories gone.  (Fox News)

Seventeen-year-old Josie Beeson lived in her home for over 8 years, before it came crashing down in a matter of seconds.

"My house got hit by the tornado. We have a lot of good friends and family helping us out here today," Beeson told Fox News Digital.

A tornado with winds over 100 miles per hour slammed the community.

"I had just gotten through the door to the basement when it hit the house. Unfortunately, I lost my dog to the tornado," Beeson said.

Madison County Emergency Management Director Diogenes Ayala told Fox News Digital that it was one of the worst tornados he’s seen in the town.

"It’s devastating to lose anyone, but especially children. It’s something that a lot of these responders had to go and recover that that won’t be forgotten," Ayala said.

Iowa Governor Kim Reynolds toured the damage Sunday and issued a disaster proclamation for Madison County. She became emotional after hundreds showed up to volunteer and help clean up the damage.

A storage structure sustains damage after a tornado hit over 13 miles in Winterset, Iowa.

Over 50 homes were damaged; one of those homes belonged to Pete Sullivan.

"I got through the kitchen and a tree fell on the house, and we made it downstairs just in time," Sullivan said.

Sullivan and his wife just bought the home in Winterset in August. The trees surrounding their home was one of the big factors that drew them to the area, but now he says it looks like a war zone.

"It’s terrible. The deaths are terrible. Everything can be replaced or repaired except for life," Sullivan said. "Tornadoes are powerful. It’s amazing what they can do in a matter of 30 seconds."

Emergency Management Director Ayala said multiple warnings and sirens went off before the tornado hit. He said his agency did its best to make sure everyone was aware to take shelter.

The community says they could use all the volunteers who can donate their time to recovery efforts and the local chamber of commerce is accepting donations to help the survivors.

Mills Hayes joined Fox News in 2022 as a multimedia reporter in Minneapolis.