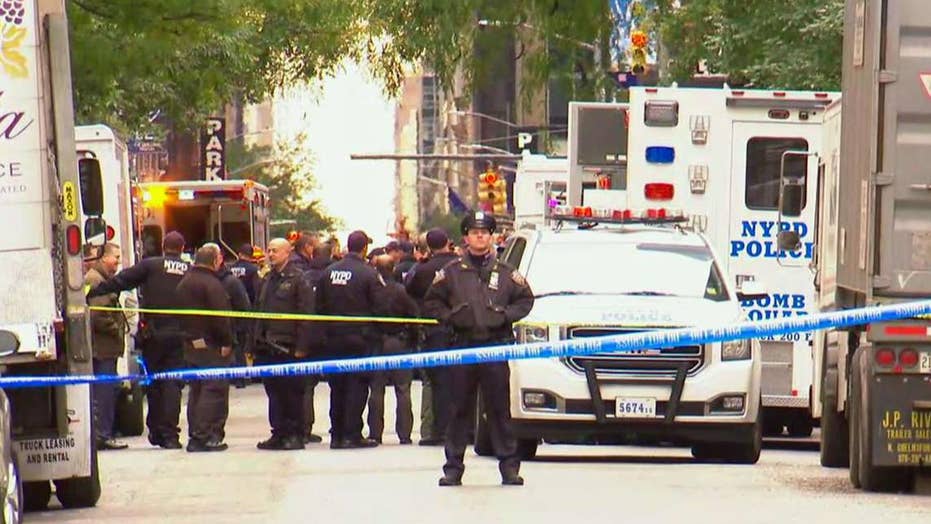 12th package recovered in Midtown Manhattan addressed to the former Director of National Intelligence; Todd Piro reports from the scene.

After officials discovered what “appeared to be a live explosive device” at the Time Warner Center — CNN’s headquarters — authorities needed to remove the device out of busy Manhattan safely. And that’s where the New York Police Department’s Total Containment Vessel came in.

The package was placed inside a large white sphere attached to an NYPD truck to be safely transported out of Manhattan on Wednesday, the New York Post reported.

“If a bomb were to explode inside there, the pressure will bleed off through a series of small vents, but all the fragmentation that would be associated with it — and of course the blast pressure shockwave — it’s contained,” Lt. Mark Torre, commanding officer of the NYPD bomb squad explained in a video.

SUSPICIOUS PACKAGES ADDRESSED TO OBAMA, CLINTON, OTHERS: A FULL LIST OF RECIPIENTS

“Of everything we use, this really promotes safety for the public because once something is in here and locked down, we can move it safely through public streets without evacuations, without shutting anything down and most importantly, without fear,” Torre said. “Nobody is going to get hurt and no property is going to be damaged so it’s money well invested.”

The NYPD transported a suspicious package believed to contain a pipe bomb to a facility in the Bronx with a Total Containment Vessel (TCV).

On Friday, a pair of suspicious packages addressed to Booker and Clapper were discovered — bringing the total number of parcels sent to 12.

The package addressed to Brennan was sent to CNN although he is an MSNBC analyst. Accompanied by emergency vehicles, it was taken to a police facility in the Bronx, where authorities were investigating it further. Another package, addressed to De Niro in Tribeca, was also transported by a TCV out of the city.

Generally, TCVs can contain 25 pounds of TNT or more during a blast, The New York Times reported. The vehicles are also becoming increasingly common among police forces, according to the newspaper.