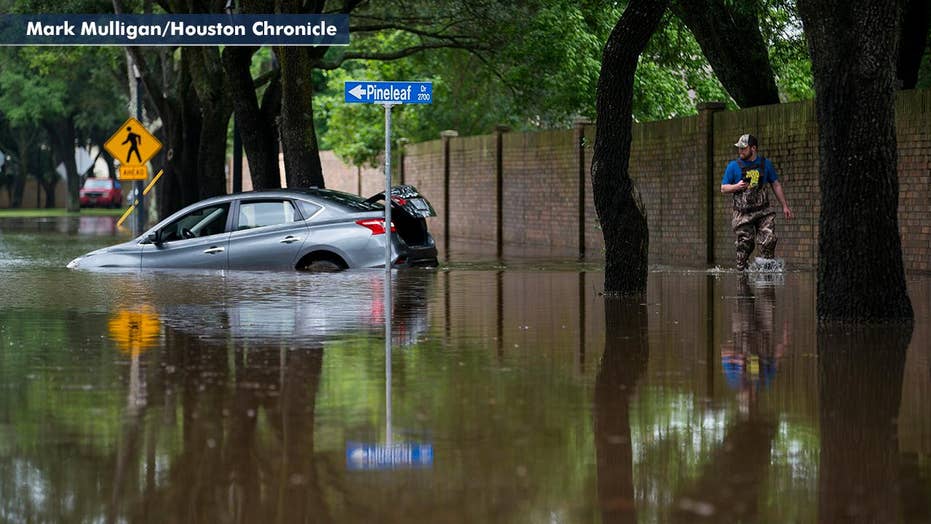 Texas communities under water after a foot of rain hammers state

HOUSTON – The Latest on heavy rain reported across much of Texas (all times local):

In the West Texas town of Merkel, about 15 miles (25 kilometers) west of Abilene, Police Chief Phillip Conklin told KTXS-TV of Abilene that seven people were rescued Wednesday from floodwaters. Three were rescued from an apartment complex, two from flood-stranded vehicles and a couple from their home.

Thunderstorms in the Panhandle prompted scattered reports to the National Weather Services of funnel clouds, but no tornadoes were reported.

Children play in the Colony Bend neighborhood of Sugar Land, Texas, on Wednesday, May 8, 2019. Residents have been surprised that the water has not receded more quickly as it has in the past when the rain has stopped. More rain is forecast for the coming days. (Mark Mulligan/Houston Chronicle via AP)

Dozens of students in the Houston area had to spend the night at school after flooded roads prevented buses from leaving and parents from reaching their children.

Most of the approximately 1,500 students at an elementary school in Cleveland, northeast of Houston, were able to leave by the end of the day after being stranded for a time Tuesday as up to 10 inches (254 millimeters) of rain swamped the region. However, the school district says about 60 students stayed overnight.

The downpour brought flooding to schools and homes as emergency personnel worked into the night to evacuate people.

The National Weather Service issued flash flood warnings. It warned that storms could continue to batter the state's Gulf Coast with rain later into the week.