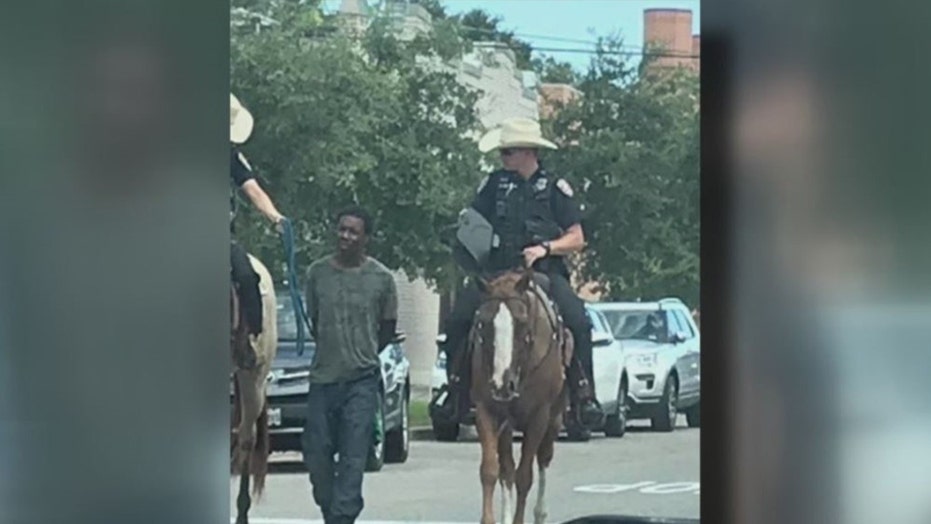 A Texas police chief has apologized after a photo showed two of his white officers, mounted on horseback, escorting a black suspect into custody with a rope linked to his handcuffs.

The two Galveston Police Department officers arrested 43-year-old criminal trespassing suspect Donald Neely on Saturday. The officers "clipped" a rope to his handcuffs and led him through downtown streets to a mounted patrol staging area, the department said in a statement on Monday. A transport unit wasn’t immediately available at the time.

“While this technique of using mounted horses to transport a person during an arrest is considered a best practice in certain scenarios, such as during crowd control, the practice was not used correctly in this instance,” the statement said.

Chief Vernon Hale apologized to Neely for “this unnecessary embarrassment.” He said his officers “showed poor judgment in this instance” and should have waited for a transport unit.

The image raised concerns as it circulated on social media. Leon Phillips, president of the Galveston Coalition for Justice, told the Houston Chronicle that the photo reminded him of racist images from the 1920s.

"All I know is that these are two white police officers on horseback with a black man walking him down the street with a rope tied to the handcuffs, and that's doesn't make sense, period," Phillips said. "And I do understand this —  if it was a white man, I guarantee it wouldn't have happened."

Hale said the department will immediately suspend this method of transportation during arrests. (Handout)

The department said they understand the negative perception of how they transported Neely during his arrest and will no longer utilize the practice.

“My officers did not have any malicious intent at the time of the arrest, but we have immediately changed the policy to prevent the use of this technique and will review all mounted training and procedures for more appropriate methods,” Hale said.

Officers were familiar with Neely, who had been warned against trespassing at that same location several times, according to the statement. He is free on bond.