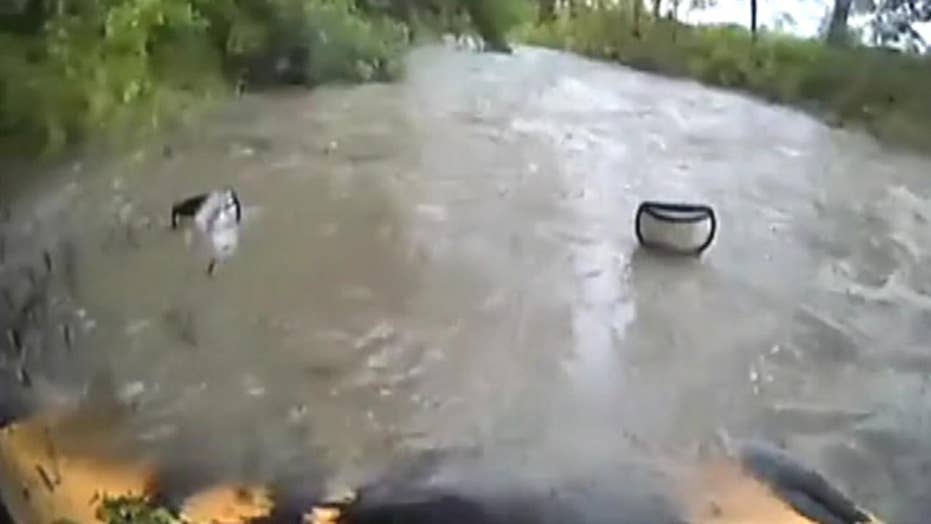 A school bus driver in Texas was arrested this month after dash cam video released Friday showed the moment he drove past a barricade and into floodwaters -- with a student on board.

The Leander Police Department said Nathan Deyoung, 57, was arrested and charged with endangerment of a child and failure to obey warning signs as a result of the Oct. 16 incident. He was later released on $10,000 bond, according to jail records.

In the video released by police, Young can be seen driving around a barricade posted due to flooding and attempting to drive across a low-water crossing that was covered with floodwaters. The school bus then gets washed off the road and stuck in the water, among trees and brush.

In the video, Young can be seen attempting to drive through floodwaters before the bus is washed off the road.

Nathan Deyoung, 57, was charged with endangerment of a child and failure to obey warning signs as a result of the Oct. 16 incident. (Williamson County Sheriff's Office)

Deyoung and the student were rescued without any injuries, FOX7 reported. The Leander Independent School District said that Deyoung has since been fired from the district.

The child's mother, Ashley Ringstaff, posted about the incident on Facebook, saying her son called her in "hysterics." While the boy was "exhausted" by the experience, she said he was not harmed.

"I hope no one ever has to listen to their child or loved one preparing to die because of a stupid decision that should of never have happened," Ringstaff wrote. "I finally understand the feeling of being numb and in shock."

She added: "Water isn’t forgiving and has more force than most people think. Just because you think you can make it across a low water crossing, doesn’t mean that you will. It’s not worth it, ever."