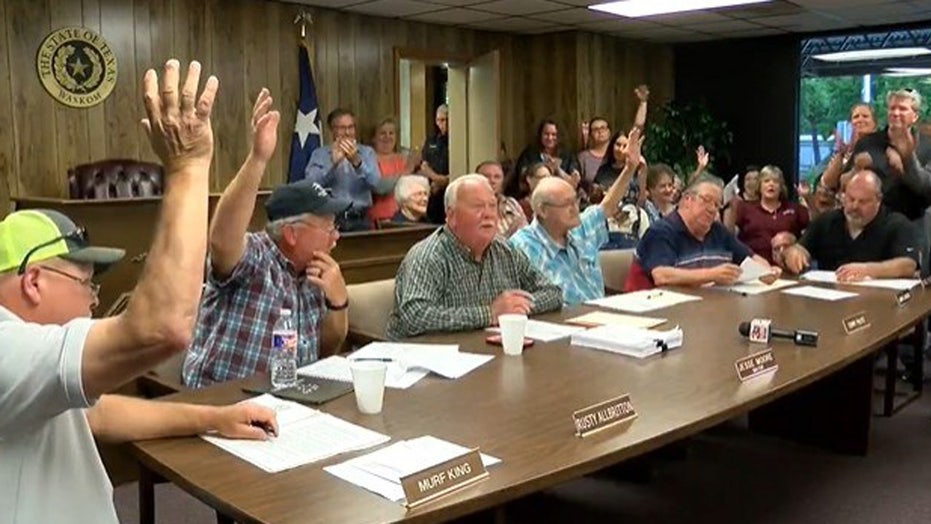 A pro-life activist in Texas is traveling from town to town in an effort to ban abortion, one city ordinance at a time.

Starting last June with the city of Waskom, a total of eight cities have now declared themselves "sanctuary cities for the unborn."

On Monday, Mark Lee Dickson, director of Right to Life of East Texas, pitched to Jacksboro; then on Tuesday, Colorado City and Big Spring, which is awaiting a second vote later this month. OnThursday night, he is headed to Gary, in east Texas.

Mark Lee Dickson, the director of Right to Life of East Texas, presented the sanctuary city for unborn children ordinance to the five-member city council. (Courtesy of Mark Lee Dickson)

"We are preparing our cities for the overturning of Roe [v. Wade]," Dickson told Fox News on the phone, during his seven-hour drive from Big Spring to Gary, "But at the same time, it's completely right to say abortion is outlawed in these cities."

Abortion rights advocates argue the ordinances are dangerous and misleading to the public.

"This extreme proposal is a tactic for abortion opponents to score political points and mislead Texans about their rights," Kamyon Conner, executive director of the Texas Equal Access Fund, told the Texas Tribune. "Access to reproductive care and abortion allows individuals and families to receive the support needed to thrive in our state."

But Dickson says there are immediate consequences to the ordinances regardless of whether or not Roe gets overturned.

"To say we can't ban abortion is simply not true," Dickson argues that cities ban "legal" things all the time – from straws to smoking – in reference to Roe and Planned Parenthood v. Casey, both of which would have to be overturned by the Supreme Court in order for the ordinance to take full effect.

Until then, however, Dickson said family members can sue an abortionist or anyone who aides an abortion within city limits, but no action can be taken against the mother herself.

"We're passing laws because resolutions do not prevent abortion clinics from coming into cities, but ordinances, a law put in place, will."

Three cities – Mineral Wells, Omaha and Jacksboro – have turned down the ordinance because of the threat of legal action or on advice from city lawyers, but that hasn't stopped Dickson.

"This is a strong stance that babies will not be murdered in our cities," Dickson said. "We need to stand up with our leaders in bringing this Holocaust to an end once and for all."