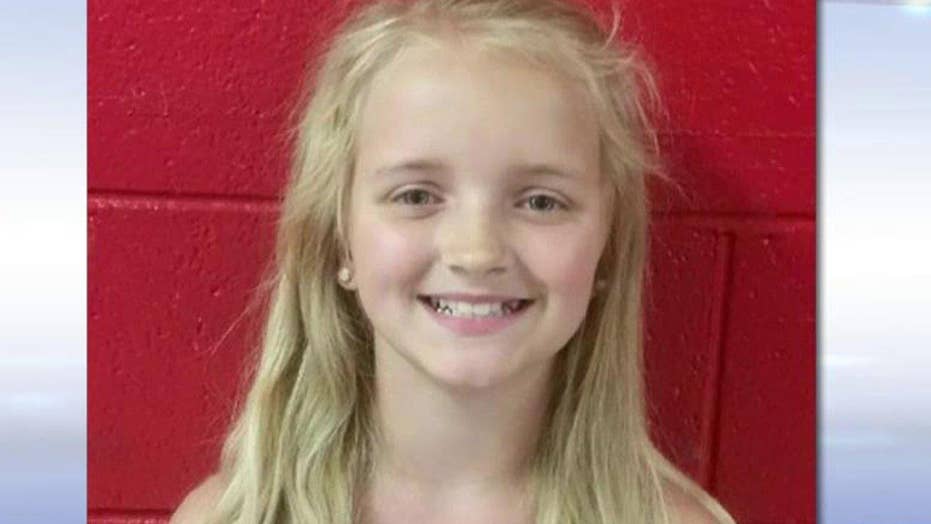 The 9-year-old Tennessee girl allegedly abducted by her uncle was found safe Thursday after he was captured by two men who held him at gunpoint until law enforcement could arrive.

Carlie Marie Trent was found in Hawkins County, the rural part of East Tennessee, according to the Tennessee Bureau of Investigation. Her uncle, Gary Simpson, is in custody, officials said.

Simpson is accused of taking Carlie from her school in Rogersville, Tenn. on May 4.

"Carlie is safe tonight because of an entire community pulling together with law enforcement to bring her home," Mark Gwyn, Director of the TBI, told reporters at a press conference Thursday evening.

Gwyn said there are no indications that Carlie was harmed, but she is being taken to a hospital as a precaution to be examined.

Gwyn said her safe return came after two men, Donnie Lawson and Roger Carpenter, were checking property as the TBI had asked people to do, when they found Carlie and her uncle on a trail only accessible by four-wheeler vehicles.

Carpenter, a Baptist minister, held Simpson at gunpoint while Lawson called police, according to Gwyn.

“This is a case of two heroes who went on their property to see if, by chance, if they were there, and they were," he said. "I think this is a clear message to the public that we need your help on these kind of cases.”

Simpson has been arrested and charged with especially aggravated kidnapping.

Earlier Thursday, the TBI had added Simpson, 57, to its Top 10 Most Wanted list and warned that Carlie was in imminent danger.

On Tuesday, Trent's father said her alleged abductor was obsessed with her and wanted her all to himself.

"He had access to her every day, he was obsessed with her, he wanted her, and he wanted her all to himself," Trent said. "That's a scary thing to think about."

James Trent said that he didn't think Simpson would hurt Carlie, but was worried what will happen if she returned home.

“It would be a great moment, but then again it'll be a scary moment because I'm just wondering how she's going to be. Is she going to be as happy as she was? [Is] she going to be scared to death of everyone?" he explained. "That's what I worry about. She just won't be the same."

On Wednesday, the TBI said the case was not a simple custody dispute and stressed that Carlie could be in grave danger.

“We realize Gary Simpson is Carlie Trent’s uncle by marriage, but we have specific – we have credible – information that Carlie Trent is in imminent danger of serious bodily harm or death,” TBI spokesperson Josh DeVine said during an afternoon press conference. “When we say this child is in danger we absolutely mean it.”

DeVine said the custody battle narrative had developed in the week since Trent was picked up from her school by Simpson, her former guardian. Simpson had recently lost custody of Trent, who was in her father’s care before her disappearance. But DeVine was emphatic that Trent’s kidnapping was not merely the product of a guardianship battle.

Here are items Gary Simpson purchased, before taking Carlie from her school May 4th. #BringCarlieHome pic.twitter.com/fGuVw7LSsZ

Investigators also said the two stopped at a Save-A-Lot grocery store on the same day to pick up “nonperishable items.”