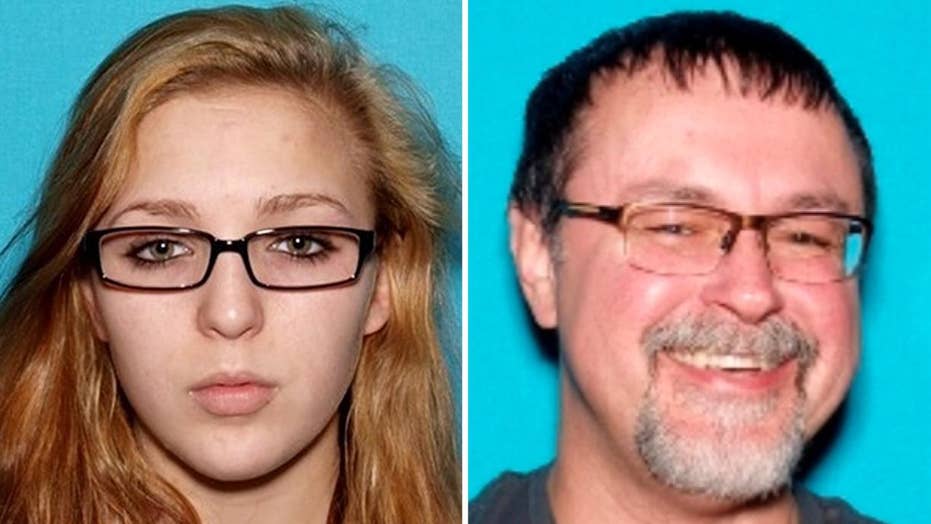 A nationwide Amber Alert manhunt ended after investigators said they got a tip last night that led them to a remote county in Northern California, where 50-year-old teacher Tad Cummins and the 15-year-old girl he's accused of kidnapping, Elizabeth Thomas, had recently taken up residence in a cabin.

The caller told local officials the pair had traveled to a very rural, isolated town called Cecilville with limited cell phone service. But the caller had spotted their vehicle, which is what led local police in Siskiyou County to them.

"We couldn’t be happier to tell you she will soon by on her way back home. This morning, authorities followed up on a tip from late last night and found Elizabeth. Tad is facing a set of charges that could keep him behind bars for many years," said Mark Gwyn, director of the Tennessee Bureau of Investigation, the agency that issued the Amber Alert over a month ago. "To the public, I can’t say how thankful we are for all your tips, concerns and support."

"We’re extremely pleased. We are beyond delighted," said Jason Whatley, the attorney for Elizabeth Thomas's family. Words can’t express the feelings that we have."

Whatley said the family is awaiting a phone call from the TBI that will them in touch with Elizabeth. The teenager is currently in custody of the FBI, and the family wants to speak to their daughter first before they make any statements.

Officials said they planned to offer any assistance to the teenage girl that they could, mentioning groups that assist children who are victims of abuse.

"Agents are currently flying on TBI aircraft to get there as quickly as possible and finally bring Elizabeth home," said Gwyn. "She’ll be flying home on TBI aircraft."

The girl's family's attorney said that he believes she will be flown back home from California tomorrow.

SHOULD MCDONALD'S WORKERS GET $50G REWARD IN FACEBOOK MURDER CASE?

Cummins and Thomas disappeared on March 13, sparking a cross-country manhunt made all the more difficult as Cummins apparently changed his appearance and may have switched out the license plate on the vehicle he was driving, according to reports. Court papers filed recently in the girl's disappearance showed she was afraid of the teacher and thought she would face repercussions at school if she resisted him.

Investigators were flooded with over 1,500 tips from the public as the case gained national attention.

Cummins was fired from his job amid an investigation into alleged inappropriate contact with Thomas.

The father of a 15-year-old Tennessee girl who disappeared with her teacher more than a month ago says he is overjoyed that his daughter has been found safe.

The father tells WSMV-TV that his daughter is probably going to be hungry and that he can't wait to tell her that he loves her. He said Thursday he didn't want to talk about the teacher who is accused of kidnapping the girl.

The father says he is going to have to figure out what sort of state of mind his daughter is in and that it may be a long road to recovery.

Jack Smith, acting U.S. attorney for the middle district of Tennessee, said his office filed federal charges against Cummins: transporting a minor across state lines with purpose of having criminal sexual intercourse. The teacher faces the possibility of 10 years in prison just for that charge.

Police previously said they have warrants charging the teacher with sexual contact with a minor and aggravated kidnapping.

Court papers filed recently in the girl's disappearance said she was afraid of the teacher and thought she would face repercussions at school if she resisted him.

A lawyer for the girl's family has said the teacher was allowed to continue working at the school for two weeks after he was reported kissing the girl. Attorney Jason Whatley has said the school system must have not believed the student's report.

The school's investigative files provided to The Associated Press by the attorney show that both Cummins and the girl denied kissing. The teacher, however, acknowledged that the girl was "a really good friend and she does leave her other classes to come see him when she needs someone to calm her down," according to a school report dated Jan. 30.

The teacher would later be reprimanded on Feb. 3 by school principal Penny Love after the girl was seen in Cummins classroom for a little more than half an hour that day. In her letter, Love said the girl being in his classroom was a violation of the principal's order to him.

The school system didn't suspend Cummins until Feb. 6. He was fired about a month later — a day after the Tennessee Bureau of Investigation issued an Amber Alert about the teen.