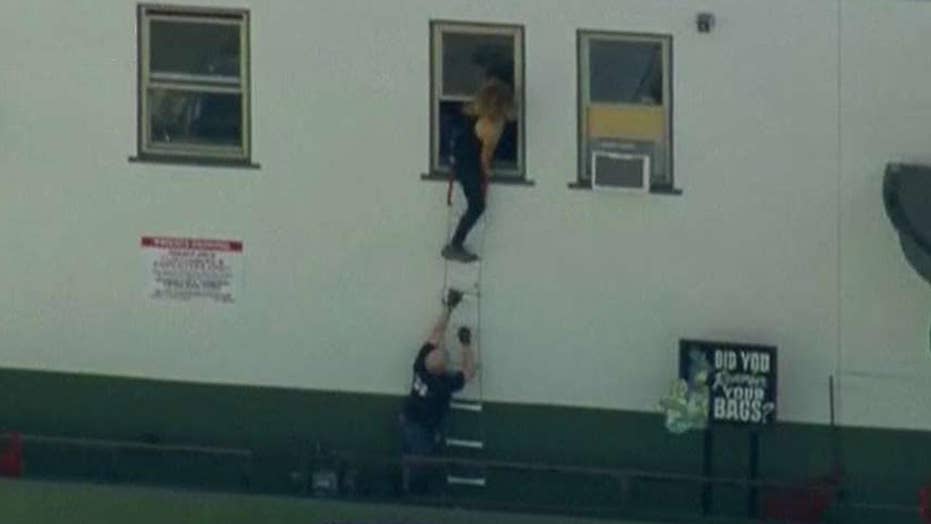 A woman has died after a gunman took hostages and barricaded himself inside of a Trader Joe's supermarket.

A 28-year-old man was arrested on suspicion of murder after he shot and killed a Trader Joe's employee Saturday when he held workers and customers hostage during a more than two-hour standoff.

Gene Evin Atkins is being held on a $2 million bail, the Los Angeles County Sheriff's Department website stated. Atkins was taken into custody around 6:30 p.m. Saturday, more than two hours after he ran into the Trader Joe's in the Silver Lake neighborhood of Los Angeles and barricaded himself.

Gene Evin Atkins, 28, is being held on suspicion of murder following the deadly standoff at a California Trader Joe's. (AP)

About two hours before, Atkins shot his grandmother seven times and wounded another woman, who he forced into a car. Atkins drove to the supermarket and ran inside after crashing his vehicle into a pole. He barricaded himself inside and held dozens of employees and customers hostage.

Moments after shots rang out in the supermarket, employee Sean Gerace and helped several of his colleagues escape. Gerace told NBC Los Angeles he was working in the backroom when he heard the commotion around 3 p.m. He and his colleagues ran to an upstairs storage area for safety.

Sean Gerace helped several employees escape the hourslong standoff by finding a ladder to climb down the second floor of the grocery store building. (KCBS via NNS)

"I grabbed an emergency ladder, barricaded the hallway, grabbed a weapon, put the ladder out the window, and just tried to get the attention of a SWAT officer," Gerace recalled.

Gerace was seen on video signaling to police officers at the scene before he and other employees climbed down the ladder. He helped other workers out of the building before running to safety.

Meanwhile, gunfire erupted between the suspect in the store and police officers outside.

Sean Gerace seen on video climbing down the ladder to help others get to safety. (KCBS via NNS)

“It was a matter of split seconds between the time he got out, the boom-boom-boom and him running into the store,” Dan Zito, who was outside of the store when the incident occurred, told the Los Angeles Times.

“I’m mostly angry, I’m still furious. There were moments of total terror. He loved the power and he was going to milk the situation,” she said about the terrifying situation.

At least one person was killed when the gunman ran into the store, barricaded himself and held dozens hostage. (AP)

"The heroism that was shown today was second to none and the teams that were able to respond, secure the perimeter and engage in conversation with the suspect no doubt saved lives today," Los Angeles Mayor Eric Garcetti said. "Our hearts go out to everyone who has been traumatized."

EMPLOYEE SLAIN AT TRADER JOE'S IN LA WAS 'MY WORLD,' BROTHER SAYS; OTHERS TWEET CONDOLENCES

A woman, identified by her family and local media as Melyda Corado, was killed during the shootout and standoff. Corado, who was a recently promoted store manager, was pulled out of the store by employees and pronounced dead at the scene.

The hostage situation ended when the gunman agreed to walk out of the store. (AP)

“They were just so devastated,” Westafer said about the staff who found out about Corado’s death. “Everyone loved her. They’re destroyed. She was in her late 20s. It’s heartbreaking. I can’t even tell you how upset they are.”

The grandmother who was shot seven times was in critical condition while the other woman suffered a grazing wound.

Fire officials said six people, ranging in age from 12 to 81, were taken to the hospital. None had been shot and all were in fair condition.