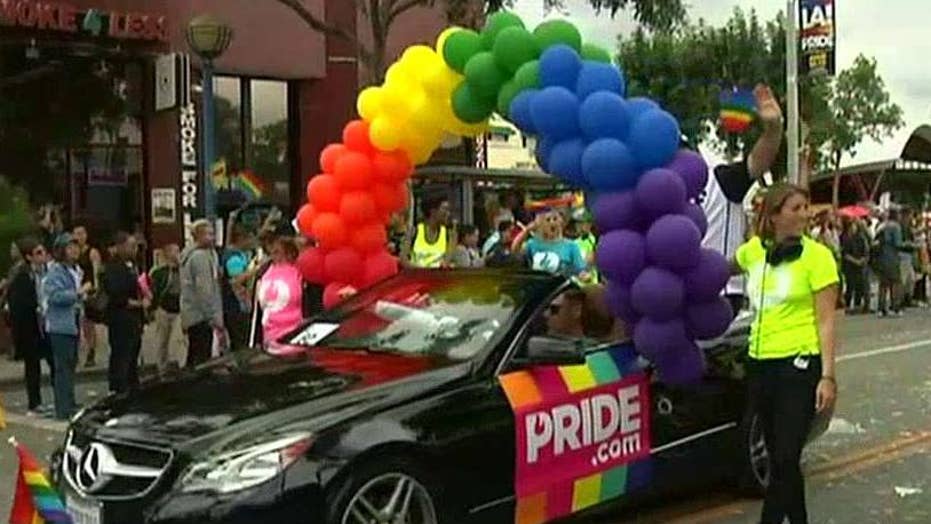 Police found a loaded assault rifle with magazines rigged to allow 60 shots to be fired in quick succession, along with 15 pounds of chemicals mixed and ready to explode in the car of an Indiana man who said he was headed to a gay pride event, authorities revealed Tuesday.

James Wesley Howell, 20, of Charlestown, also had two other loaded rifles, ammunition, a stun gun, a buck knife and a security badge when he was arrested early Sunday in Santa Monica, they said.

Howell made his initial court appearance Tuesday and pleaded not guilty to three felony weapons and ammunition charges. The judge set bail at $2 million.

"I cannot in good conscience think of any reasonable reason that somebody would be traveling across the country with all of these things," he said.

Howell recently drove from Indiana to Los Angeles because of pending charges against him in his home state, according to statements he made to police.

Authorities haven't disclosed any evidence that Howell intended violence at the LA Pride event in West Hollywood that attracts hundreds of thousands of people.

Friends in Indiana described Howell as a gun enthusiast with a short temper. In October, he twice was accused of pulling a gun and making threats, once against his then-boyfriend and once against a neighbor.

Howell was convicted in April of misdemeanor intimidation for the incident with his neighbor. Under the terms of his probation, Howell was not allowed to have weapons or leave Indiana.

Deputy District Attorney Sean Carney said gun enthusiasts don't mix Shoc-Shot until it's ready to be used, as federal regulations require, and the amount that Howell had "far exceeds any amount that would reasonably be used."

Howell's attorney, Pamela Jones, told the judge there was no evidence Howell planned to detonate the chemicals. She said a black hood found in his car was "just a clothing item," and nothing indicated Howell planned to use it as a mask, as police contended was a possibility.

James Wedick, a former longtime FBI agent, said the manipulation of the gun magazines would allow someone to reload 30 rounds in less than 2 seconds.

"It doubles your killing capacity by 100 percent," he said. For a civilian to have a weapon rigged as such, "it suggests his purposes are deadly."

The FBI took the lead in the investigation and its probe continues, spokeswoman Laura Eimiller said.

Rebecca Lonergan, a former federal prosecutor who teaches national security law at the University of Southern California, said filing the state charges keeps Howell in custody while the FBI continues building its own possible case.

"In the atmosphere we have where there is such great concern about active shooters, about terrorism, about hate crimes, both the state and federal investigators are going to want to thoroughly look at this guy," she said.

On Tuesday, the sheriff's office in Clark County, Indiana, said Howell also is the subject of a sexual assault investigation. The alleged incident occurred May 31, about two weeks before Howell's arrest in California.