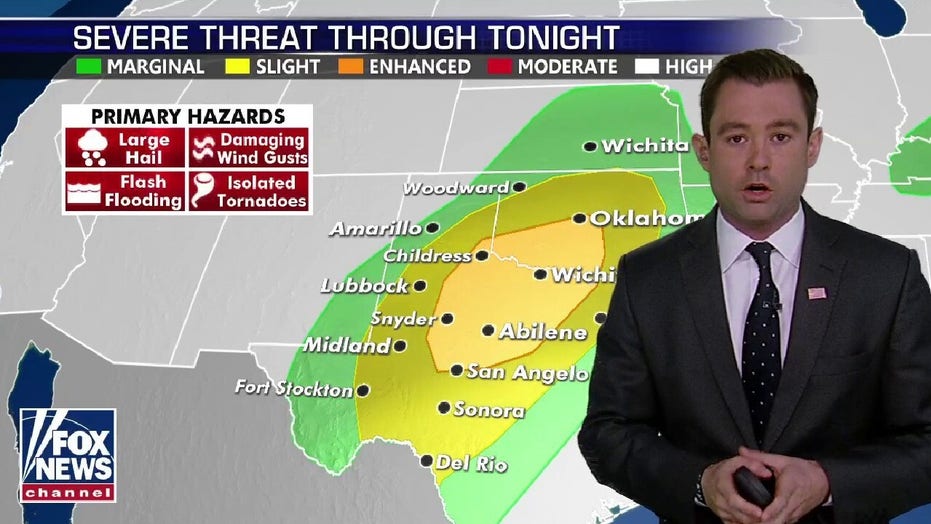 It may officially be the first day of spring, but a large storm system has parts of the country stuck in winter.

The National Weather Service's Weather Prediction Center said that a "significant storm system" is bringing blizzard conditions and the threat of tornadoes to the nation's midsection.

"Heavy snow and strong winds will cause hazardous travel from the Rockies to portions of the northern Plains," the NWS said. "Heavy rainfall and severe thunderstorms will be common from the southern Plains to the Mississippi Valley and Midwest."

Forecasters said that snow is expected across the central Rockies through Thursday, with high winds that will create blizzard conditions in southeastern Wyoming, northeastern Colorado and western Nebraska.

"Travel should be restricted to emergencies only," the NWS forecast office in Cheyenne, Wyo., said. "If you must travel, have a winter survival kit with you. If you get stranded, stay with your vehicle."

In the Denver area, between 3 and 8 inches of snow are in the forecast for the metro area, with up to a foot in the foothills northwest of the city, according to FOX31.

The NWS office in Boulder reported that "massive snowflakes" were falling outside the office.

Further east, rain and thunderstorms are in the forecast ahead of a cold front.

The most widespread thunderstorms are expected from the Mississippi Valley into the Ohio Valley, with some areas at an enhanced risk for severe weather. The prediction center said an "enhanced" risk of severe thunderstorms includes portions of eastern Nebraska, Iowa and northern Missouri.

More than 10 million people, including the cities of Indianapolis, Omaha, St. Louis, and Lousiville, could be impacted by the storms, according to the SPC.

The storm system already was behind several tornadoes that impacted parts of Texas Wednesday.

One tornado left damage in Wise County after hitting near the town of Alvord.

Damage was reported from a tornado on Wednesday night in Wise County, Texas. (FOX4)

“No reported injuries, but we are getting more and more damage reports,” Cody Powell, of Wise County’s Office of Emergency Management, told FOX4.

Video from a storm chaser shows the tornado moving through in the middle of the night.

In West Texas, severe storms produced another tornado in the community of Tye, near Abeline. Only minor injuries were reported, and the roof was ripped off one home, FOX4 reported.

As the storm system moves east on Friday, impacts will spread to coastal areas.

"On Friday, the cold front should press east and south, moving showers and thunderstorms into the East," the weather service said. "A few strong storms can be expected in parts of the Ohio Valley to Mid-Atlantic and Northeast."