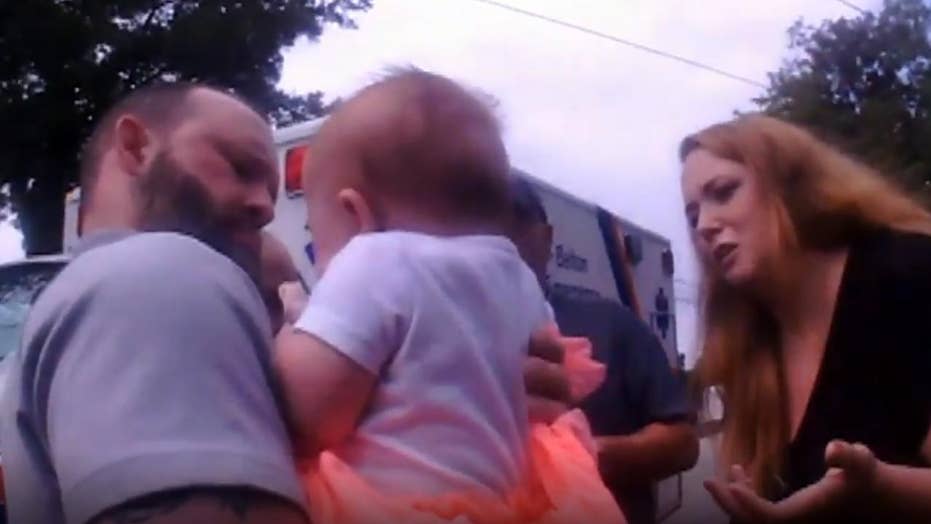 Corporal Derrall Foster from the Belton Police Department came to the aid of four-month-old Maryelle Lanning after she began choking on Tylenol her mother had given her.

A South Carolina police officer is being hailed as a hero after a dramatic body camera video showed how his actions helped save a choking 4-month-old infant.

Cpl. Derrall Foster of the Belton Police Department said he arrived at the scene on Oct. 4 to find neighbors waving him down in a panic, Fox Carolina reported.

A baby named Maryelle had stopped breathing after choking on a Tylenol her mother, Kiersten Nivens, administered to help the infant's teething. The desperate mother had run outside for help after her phone battery died.

"She was not blue yet, but she was not breathing,” Foster told the station. “She was very limp. I saw my 2-year-old as if it were her, and I knew we had to take care of the situation.”

Video shows Foster performing a modified version of chest compressions for infants, tapping her back to dislodge the medicine from her throat. But the child wasn't responding and appeared lethargic, he told the station.

Foster didn't give up and continued to pat her back multiple times until he heard the perfect sound: Maryelle’s cry.

“Oh God it was very relieving,” Foster said. “I’m just doing my job. That’s all I was doing."

After the scare, Nivens told the station she was thankful for Foster and all the first responders who helped her child.