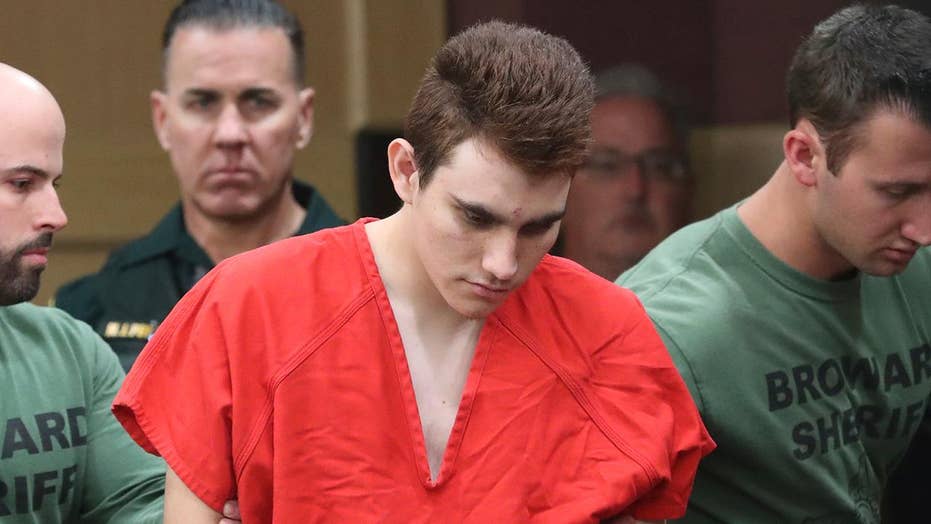 A new report shows that school counselors and officials recommended Cruz be forcibly committed in 2016.

Some school counselors and officials were so concerned about the mental stability of Nikolas Cruz, accused in last month’s Florida school massacre, that they decided to have him forcibly committed more than a year before the shooting.

However, the recommendation was never acted upon.

Documents in the criminal case against Cruz showed that school officials at Marjory Stoneman Douglas High School and a sheriff's deputy recommended in September 2016 that Cruz be involuntarily committed for mental evaluation under Florida's Baker Act for at least three days, sources confirmed to Fox News on Sunday.

The documents, part of Cruz's criminal case in the shooting, showed that he had written the word "kill" in a notebook, told a classmate that he wanted to buy a gun and use it, and had cut his arm supposedly in anger because he had broken up with a girlfriend. He also told another student he had drunk gasoline and was throwing up. Calls had even been made to the FBI about the possibility of Cruz using a gun at school.

The documents, first revealed by The Associated Press, were provided by a psychological assessment service initiated by Cruz's mother called Henderson Behavioral Health. The documents showed a high school resource officer who was also a sheriff's deputy and two school counselors recommended in September 2016 that Cruz be committed for mental evaluation under Florida's Baker Act. That law allows for involuntary commitment for mental health examination for at least three days.

Such an involuntary commitment also would have been a high obstacle if not a complete barrier to legally obtaining a firearm, such as the AR-15 rifle used in the Stoneman Douglas massacre on Feb. 14, authorities said.

Nikolas Cruz is seen during a hearing flanked by his lawyer Diane Cuddihy. (AP)

There is no evidence Cruz was ever committed. Coincidentally, the school resource officer who recommended that Cruz be "Baker Acted" was Scot Peterson — the same Broward Sheriff's Office deputy who resigned amid accusations he failed to respond to the shooting by staying outside the building where the killings occurred.

David S. Weinstein, a former federal prosecutor, said that an involuntary commitment would have been a huge red flag had Cruz attempted to buy a firearm legally.

"If he had lied, hopefully the verification of the form would have pulled up the commitment paperwork," Weinstein said.

The documents did not say why Cruz was not committed under the Baker Act or whether he may not have qualified for other reasons. The law allows a law enforcement officer such as Peterson to initiate commitment under the Baker Act.

An attorney for Peterson did not immediately respond to an email seeking comment Sunday.

Cruz, 19, was charged in a 34-count indictment with killing 17 people and wounding 17 others in the attack. He faces the death penalty if convicted, but his public defender Melisa McNeill has said he would plead guilty in return for a life prison sentence.

Stoneman Douglas High School students mourn the death of their classmates after a gunman opened fire and killed 17 people. (AP)

In the Henderson Behavioral Health documents, Cruz's mother Lynda was quoted as saying she had new concerns about her son's mental state after he punched holes in a wall at their home in Parkland. The clinicians at Henderson came to the home for interviews and said Cruz admitted punching the wall but said he did so because he was upset at a breakup with his girlfriend.

Cruz also admitted cutting his arm with a pencil sharpener.

He also told the clinician he owned only a pellet gun and was not capable of doing "serious harm" to anyone.

The documents showed that Cruz was very much on the radar screen of mental health professionals and the Broward County school system, yet very little apparatently was done other than these evaluations.

Other red flags also have surfaced, including calls to the FBI about Cruz's potential to become a school shooter and numerous visits by county law enforcement officials to his home - both before his mother died in November and after, when he lived briefly with a family friend in Palm Beach County.

It's not clear from the documents who the recommendation was forwarded to or why it was not followed up.