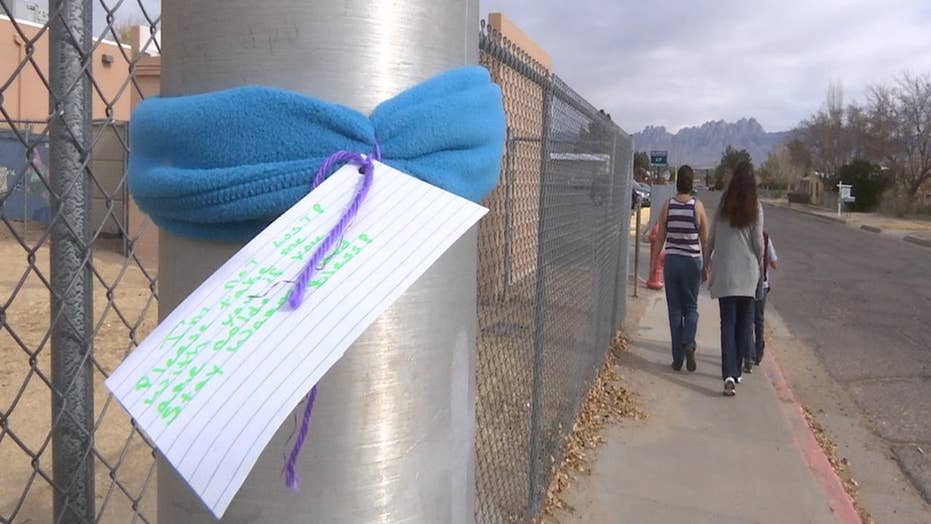 Two sisters in New Mexico are using their spare time to make scarves for the needy and homeless stuck in the cold.

Sarah Jean Gomez and Carolina Gore of Las Cruces, N.M. began crocheting scarves in November and have been giving them to people in need since. The sisters tie the scarves around telephone poles, signs and lights for the poor to take, as needed.

“It’s just what God put in my heart. My calling is to help others, to serve,” said Gomez.

The sisters said they’ll donate as many scarves as possible once a week until the winter is over. On a recent trip they hung 13 scarves, bringing their donation total to 83. It’s given them a great feeling of satisfaction. Gomez said while she was volunteering, she saw multiple people wearing the scarves.

“It really makes my heart warm that you know I see that person and I’m like: ‘Oh my God, look, they’re wearing one of our scarves,’” said Gomez. "I love it."

“We really, really enjoy it. Because sometimes we actually bump into people while we’re doing it and we actually offer them the scarf,” Gore said.

They leave a note with each scarf that says: "I’m not lost; please take me with you if you are cold. Stay warm. God Bless."

The sister’s endeavor is just one part of a nationwide scarf-hanging trend. A movement called “Chase The Chill” started in 2008, with a group in Pennsylvania also hanging scarves in public for those in need.

The “Chase” movement has since grown to Boston, Detroit, Toronto, Winnipeg, Joplin and other cities and states around the country.

For the sisters, there is an unspoken rule that donating has to be fun. During their trips to hang the scarves, they constantly chat and joke.

“Because then we get to spend more time together and, you know, talk more and reminisce,” said Gore.

The sisters say they want to expand their project.

“God went out and he helped the people who need it,” said Gomez. “I’m going to take it to them because that’s what God would do. I don’t know, God just put it in my heart to be a giver.”