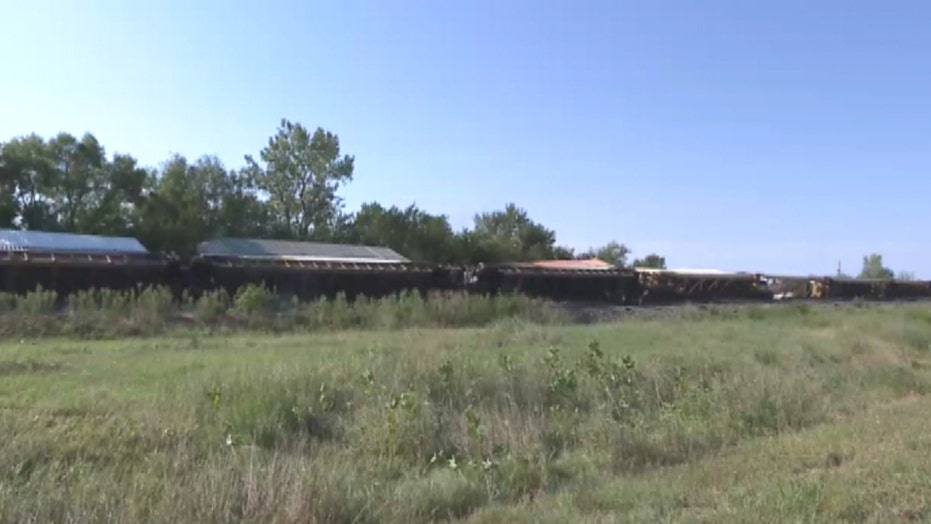 A line of severe thunderstorms that roared across Kansas early Sunday morning reportedly brought winds so powerful they caused two trains with more than 100 cars to derail.

The National Weather Service said a local storm report of thunderstorm wind damage was reported around 11:56 p.m. near Walton, located about 32 miles north of Wichita. Two trains were reported to have derailed near Walton, with 90 rail cars derailed on one train and 50 on the other, according to the NWS.

"The rail cars were all empty and many were double stacked," the agency said. "No injuries were reported."

BNSF Director of Public Affairs Andy Williams told KSN-TV that one train was traveling at an estimated 15 mph while preparing to stop due to the severe weather when the winds caused it to derail.

Dozens of train cars were blown off the tracks in Walton, Kansas, after strong gusts from passing thunderstorms just before midnight on Sunday. (KWCH via NNS)

Another train that was parked in a storage yard was also blown over, according to Williams.

Emergency dispatchers said the cars blown over were all empty, so there were no concerns about hazardous materials. (KWCH via NNS)

"It's definitely the first time we've seen a train knocked over and seen this much destruction on spot," he told the television station.

Wind gusts as high as 67 mph were measured at the Newton Airport located nearby, according to the NWS.

The weather service had warned of a line of severe storms approaching the area with winds between 65 and 70 mph. Besides toppling train cars, the strong winds also knocked out power for residents in the area.

"We're out of power and there are lot of trees down on Walton Avenue that's knocked over," Dugan said.

On Sunday, multiple cranes and crews were out in Walton working to clean up the derailments. Railroad officials told KSN that train traffic will be rerouted to avoid the Walton area until cleanup and repair operations are complete.