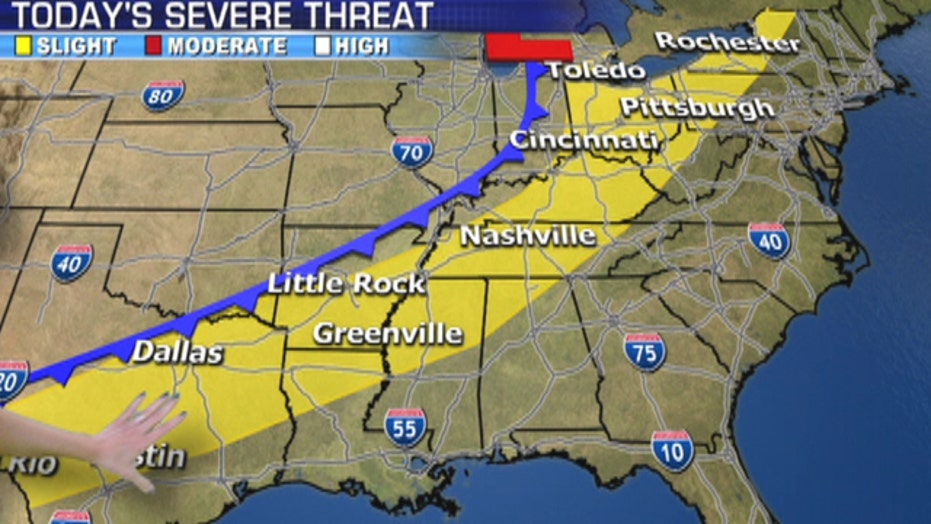 A slow-moving storm front continues to inch across portions of the Midwest Saturday afternoon about 24 hours after several deadly tornadoes touched down near Oklahoma City.

There is a risk for severe storms and a slight chance of a tornado developing from northern Texas to the Great Lakes region during the afternoon and evening hours.  The storm system is expected in the Pennsylvania and New York by Sunday afternoon.

The National Weather Service said the main threat will include damaging winds and hail from southern Michigan to Texas. The greatest threat appears to be over Texas, where large hail is expected.

Emergency officials set out Saturday to see how much damage a violent burst of thunderstorms and tornadoes caused as it swept across the Midwest overnight. Officials raised the death toll to nine and said over 100 were injured.

The storm toppled cars and left commuters trapped on an interstate highway as it bore down during Friday's evening rush hour near Oklahoma City. The National Weather Service reported "several" tornadoes rolled in from the prairie, terrifying towns along their paths.

Storms brought another tense day for a region still reeling from the recent monstrous twister known as an EF5, ranking at the top of the scale used to measure tornado strength, that struck the Oklahoma City suburb of Moore on May 20, killing 24 and decimating neighborhoods.

Storm chasers with cameras in their cars transmitted video showing a number of funnels dropping from the supercell thunderstorm as it passed south of El Reno and into Oklahoma City just south of downtown. As the cell advanced, police urged motorists to leave I-40 and seek a safe place.

The U.S. averages more than 1,200 tornadoes a year and most are relatively small. Of the 60 EF5 tornadoes to hit since 1950, Oklahoma and Alabama have been hit the most -- seven times each.

National Weather Service meteorologists said Saturday that it's unclear how many tornadoes touched down as part of the Friday evening storm system. Dozens of tornado warnings were issued for central Oklahoma and parts of Missouri, especially near St. Louis, they said, but crews must assess the damage before determining whether it was caused by tornadoes or severe thunderstorms.

But one thing is certain: The chances for severe weather are on the decline as a cold front moves through the region, said weather service meteorologist Gene Hatch in Springfield, Mo.

This spring's tornado season got a late start, with unusually cool weather keeping funnel clouds at bay until mid-May. The season usually starts in March and then ramps up for the next couple of months.