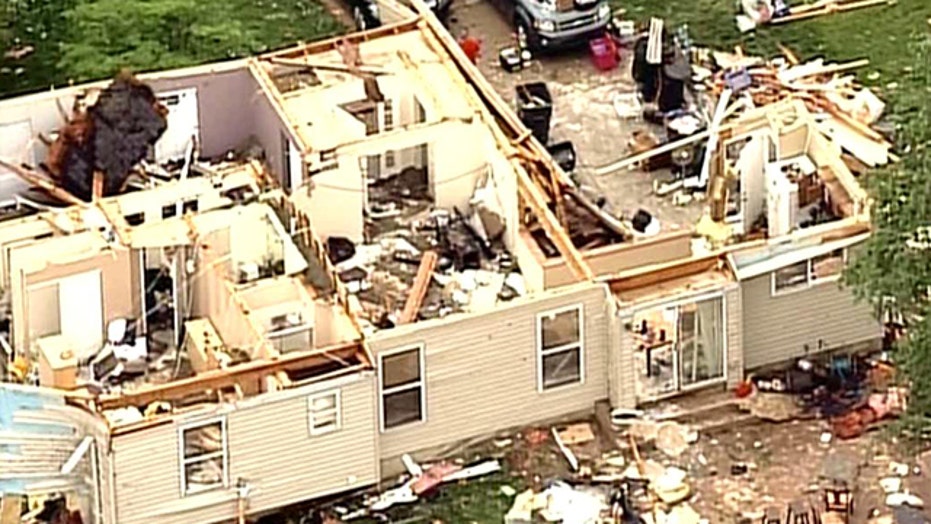 At least nine people have died after a series of tornadoes slammed through the Oklahoma City area Friday, with at least 100 people injured, while heavy flooding hampers recovery efforts.

The state medical examiner's office confirmed Saturday morning that the death toll had risen to at least nine, including at least two children. Meanwhile the Oklahoma State Department of Health reported that Oklahoma City-area hospitals treated 104 people. More than half of those were people who had been cut or pierced.

Law enforcement officers and Red Cross damage assessment workers are heading out to view damage in the city and its suburbs. Heavy rain was forecast for Saturday, which could hinder rescue and recovery efforts further.

“The flooding is the major problem in the Oklahoma City metro,” Lt. Jay Barnett of the Oklahoma City Police Department told The Oklahoman. “A lot of that has to do with people who, for whatever reason, instead of sheltering decided to outrun the storm and got caught in it.”

“Areas of the city that don't normally flood — we're seeing flooding,” he said.

The broad storm hit during the evening rush hour and stuck around, causing havoc on Interstate 40, a major artery connecting suburbs east and west of the city, dropping so much rain on the area that streets were flooded to a depth of 4 feet.

"Several spots are impassable whether it's high water or power lines that are down," Randolph told ABC News. "We've had multiple crashes, some of which are probably going to be there for a while as we're unable to get wreckers to clear the roadway."

Power utilities Oklahoma Gas and Electric and Ameren said that 200,000 customers were without power in Oklahoma, Missouri and Illinois. Meanwhile, according to the National Weather Service, nearly two dozen people were rescued from areas cut off by rising water.

"We haven't had a chance yet for our team to take a look at the damage out there because the flood waters are still keeping us out of the area," Oklahoma Emergency Management Keli Cain told ABC News Radio on Friday.

"We haven't heard anything from anyone," Angela Newnam, an Oklahoma resident, told Fox News Saturday morning. "Emergency officials can't get back here."

Meteorologists had warned about particularly nasty weather Friday, but said the storm's fury didn't match that of a top-of-the-scale EF5 tornado that struck suburban Moore, where a tornado killed 24 on May 20. Instead, Canadian County Undersheriff Chris West estimated that Friday's storm was either an EF3 or an EF4.

The Friday storm, however, brought with it far more severe flooding than that on May 20. It dumped around 7 inches of rain on Oklahoma City in the span of a few hours and made the tornado difficult to spot for motorists trying to beat it home, said Bruce Thoren, a meteorologist with National Weather Service in Norman.

"Some tornadoes are wrapped in rain, so it's basically impossible to see, which is extremely dangerous," Thoren said. "Somebody driving along really not familiar with what's going on can basically drive into it."

Rick Smith, the warning coordination meteorologist for the National Weather Service at Norman, said the storm packed a powerful punch.

"This storm had everything you could handle at one time: tornadoes, hail, lightning, heavy rain, people clogging the highways," Smith said.

The region was fortunate because the storm touched down mostly in rural areas and missed central Oklahoma City.

"It's not even close to anything like what we had last week," Smith said. "We were very concerned this would move into downtown. It would have been a major problem. It made all the difference that it was out in the country."

But frequent lightning roiled the skies well after the main threat had moved east. Highways and streets were clogged late into the night as motorists worked their way around flooded portions of the city. Will Rogers World Airport said flights wouldn't resume until morning, after debris was cleared from runways.

At Will Rogers, passengers were directed into underground tunnels as the storm passed just north of the airfield. However, people near the area said they weren't aware of any damage.

Television cameras showed debris falling from the sky west of Oklahoma City and power transformers being knocked out by high winds across a wider area.

As the storm bore down on suburban Oklahoma City, Adrian Lillard, 28, of The Village, went to the basement of her mother's office building with a friend, her nieces, nephews and two dogs.

"My brother's house was in Moore, so it makes you take more immediate action," Lillard said while her young nieces played on a blanket on the floor of the parking garage. "We brought toys and snacks to try our best to keep them comfortable."

A storm with winds approaching 80mph rolled into Moore Friday.

Well before Oklahoma's first thunderstorms fired up at late afternoon, the Storm Prediction Center in Norman was already forecasting a violent evening. From the Texas border to near Joplin, Mo., residents were told to keep an eye to the sky and an ear out for sirens.

Storm chasers with cameras in their cars transmitted video showing a number of funnels dropping from the supercell thunderstorm as it passed south of El Reno and into Oklahoma City just south of downtown. Police urged motorists to leave I-40 and seek a safe place.

"I'm in a car running from the tornado," said Amy Sharp, who last week pulled her fourth-grade daughter from the Plaza Towers Elementary School as a storm approached with 210 mph winds. "I'm in Norman and it just hit Yukon where I was staying" since last week's storm.

"I'm with my children who wanted their mother out of that town," Sharp said, her voice quivering with emotion.

In Missouri, the combination of high water and fallen power lines closed dozen of roads, snarling traffic on highways and side streets in the St. Louis area. At the Hollywood Casino in suburban of Maryland Heights, gamblers rushed from the floor as a storm blew out windows and tore off part of the roof.

Rich Gordon, of Jefferson City, said he was on the casino floor when he heard a loud "boom."

"I didn't know if it was lightning or what, but it was loud," Gordon said.

This spring's tornado season got a late start, with unusually cool weather keeping funnel clouds at bay until mid-May. The season usually starts in March and then ramps up for the next couple of months.

The U.S. averages more than 1,200 tornadoes a year and most are relatively small. Of the 60 EF5 tornadoes to hit since 1950, Oklahoma and Alabama have been hit the most -- seven times each.

Reuters and The Associated Press also contributed to this report.