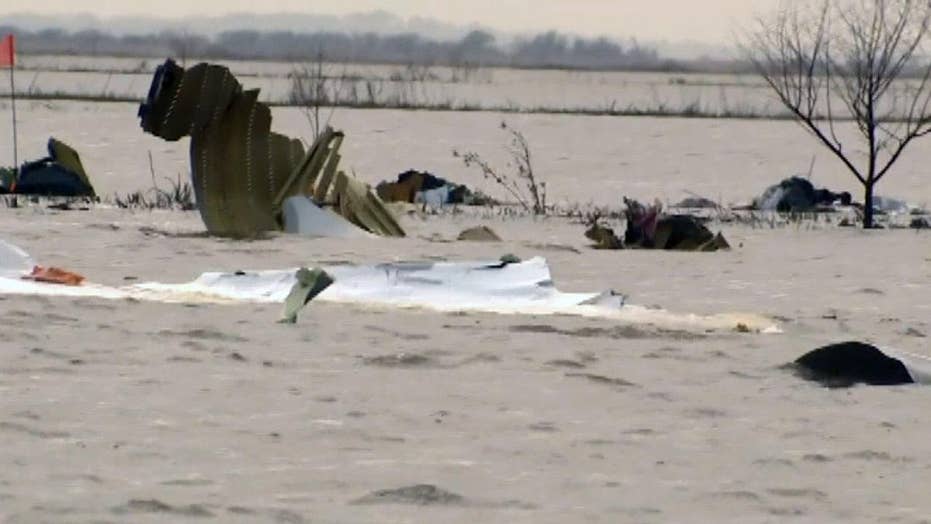 Atlas Air Flight 3591 operated on behalf of Amazon, headed to Houston from Miami, crashed in Anahuac, Texas killing all three passengers on board.

Investigators remain at a bay in southeast Texas looking for clues as to what caused a cargo plane carrying Amazon packages to plunge out of the sky on Saturday killing all three men on board.

The Chambers County Sheriff's Office said Monday that two bodies recovered from Trinity Bay have been identified as First Officer Conrad Aska, 44, the co-pilot, and Sean Archuleta 36, a jump seat rider on the flight. The body of the pilot and the black box have not been found.

"It's a first in my career and I've been doing this for 35 years," Chambers County Sheriff Brian Hawthorne told FOX26. "I never dreamed we would have a Boeing 767 crash a mile and a half from the sheriff's office. We're fortunate the pilots were able to get to the water versus in the middle of town."

Atlas Air Flight 3591,  a Boeing 767 cargo plane, was headed to Houston from Miami and was operating on behalf of Amazon Prime Air when it crashed Saturday afternoon in Trinity Bay about 35 miles east of Houston.

Debris from a crashed cargo plane can be seen in Trinity Bay, Texas on Monday. (FOX26)

Hawthorne took FOX26 on a tour of the crash site Monday, where thousands of pieces of plane parts could be seen.

Winds on Monday pushed the tide south, which exposed and revealed more of the crash site, the agency said on Facebook.

"One of our security cameras captured about five seconds of the jet and it's in a steep nose dive," Hawthorne told the television station. "You can see it go into the water. You can see the splash."

The aircraft's so-called "black boxes" have yet to be recovered, and are believed to be in thick mud

This image taken from video provided by KRIV FOX 26 shows the scene of a cargo plane crash on Saturday, Feb. 23, 2019 in Trinity Bay, just north of Galveston Bay and the Gulf of Mexico in Texas. (FOX26)

Loni Alley, a former Houston firefighter and one of the volunteers assisting with the search efforts, told KHOU the area is "total devastation."

“What’s so difficult out there right now, there’s not a lot of water, there's a lot of mud and the mud is like quicksand out there," Alley told KHOU. "You can get stuck really easily and that is impeding some of the searching”

Crews using airboats and helicopters have circled the crash scene, where white chunks of fuselage could be seen above long grass. The muddy landscape has made the process "painstaking," National Transportation Safety Board Chairman Robert Sumwal said.

Thunderstorms in the area on Monday forced authorities to suspend search operations due to lightning being reported.

Archuleta, a captain with Mesa Airlines, had been getting a lift back to his home in the Houston area, his friend told the Houston Chronicle. The 36-year-old was a new father and weeks away from starting his "dream" job flying for United Airlines, Don Dalton, Archuleta's roommate, told the paper.

Archuleta's wife lives in Colombia and was "devastated" by the news of his death, Dalton said.

Atlas Air said in a Sunday statement that it has established a program to support the families of the dead and that it has a team, including CEO Bill Flynn, at the crash site to assist investigators.

The last crash involving a large cargo plane in the United States was in 2016, according to a Federal Aviation Administration spokesman. The landing gear of a FedEx flight collapsed after touching down at Fort Lauderdale-Hollywood International Airport, causing the left wing of the McDonnell Douglas MD-10-10F to catch fire.