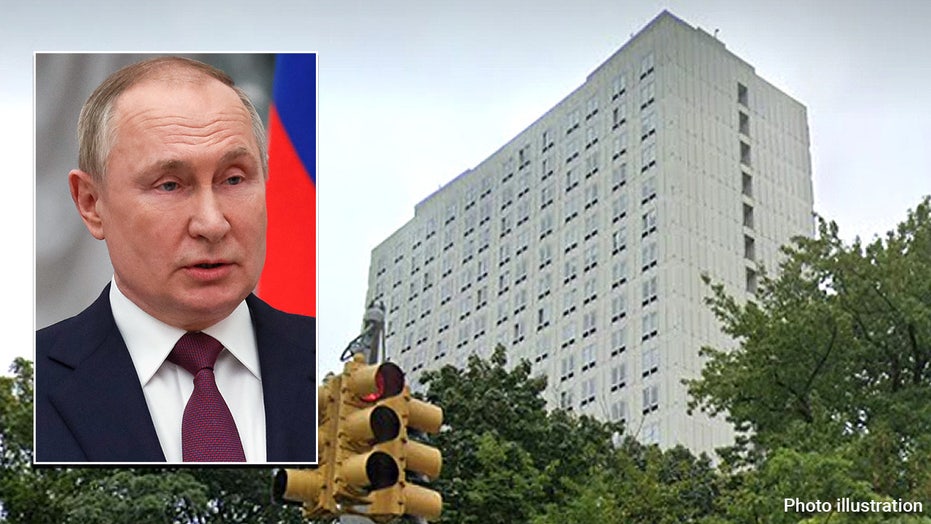 Russian attack on Kyiv could be 'quite devastating': Gen. Keane

A sole protester stood outside the complex known as the Russian Diplomatic Compound in New York City’s Riverdale neighborhood on Thursday, hours after a long-anticipated war began across the world in Ukraine.

The compound, a white high-rise tower located at 355 West 255th Street, sits at one of the highest points in New York City and has often been the subject of speculation surrounding the building's purpose and residents' practices. The building is home to Russian diplomats, many of whom work in the United States as intelligence officers – or intelligence "operatives," as the Russians call them – and seek information or connections that the federation might need, multiple experts told Fox News Digital.

"They view us as threat number one. And sooner or later, they believe that information will be useful, whether it's for wartime or peacetime."

Most Russian intelligence officers – those who work for the Foreign Intelligence Service (SVR) or the federation's military intelligence agency, known as the GRU – live in the building, which is known to some law enforcement officers as the "plex," said Robin Dreeke, a retired FBI special agent and former head of the bureau’s Counterintelligence Behavioral Analysis Program.

"Open secret is a good way to put it," Dreeke said, when asked. "I think they think it’s more of a secret than we do."

When asked on whom or what these intelligence officers might be spying, Dreeke said, "everything."

"A lot of people think that spies are just going for the high-level classified military infrastructure kind of stuff," Dreeke continued. While that is true, "the real purpose of spying/intelligence collection is filling information gaps that another country has, and mostly to provide their policymakers and decision-makers the knowledge they need that's not common knowledge that they can get through legitimate means."

Dreeke has first-hand experience with the compound, as he spent hours outside the building during his time with the FBI New York’s Russian Military Intelligence Squad from 1997 to 2005. To put it simply, his unit tried to recruit Russian spies and then neutralize them to protect American interests, national security and NATO allies.

MOLOTOV COCKTAILS ON THE MENU: UKRAINIAN BREWERY SWITCHES FROM BEER TO BOMBS AMID RUSSIAN INVASION

He remained involved with numerous operations related to GRU officers throughout his career. He later founded a company, People Formula, and has since authored several books.

"It’s what we called a ‘symmetrical threat.’ We know they’re here. They’re diplomats under diplomatic cover, so they actually have all the privileges of diplomats. So, when they’re caught conducting espionage against our country, you can’t throw them in jail, because they’re diplomats," Dreeke continued. 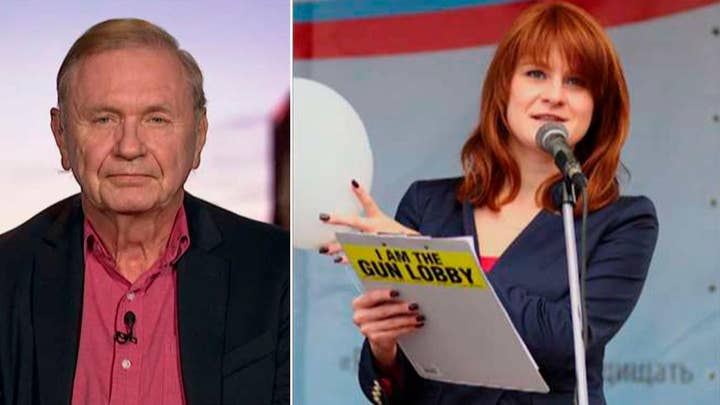 Barsky grew up in East Germany and was later recruited by the now-defunct KGB, Russia’s security agency, before it ultimately became the Federal Security Service of the Russian Federation (FSB). According to a biography on his website, he lived a double life in America for 10 years – during which time he worked as a spy for the Soviet Union. Barsky left the job and was later arrested by the FBI. He is now an American citizen who has become a prominent author and public speaker.

Only diplomats live in the Russian compound in Riverdale, meaning any Russian intelligence officer who has asymmetrical intentions would not. Similar compounds are located anywhere in the country where there is a Russian consulate, Dreeke said.

PUTIN PAINTED INTO A CORNER AS WORLD LEADERS, MAJOR COMPANIES AND EVEN SOME OF HIS PEOPLE TURN AGAINST HIM

There are Russian diplomats living inside the complex who are not intelligence officers, he went on. "And then you have others that, they do the diplomatic job probably one or two hours a day. And the rest of the day is spent collecting intelligence" to fill information gaps and then sending that information to the Russian government in Moscow, he said. 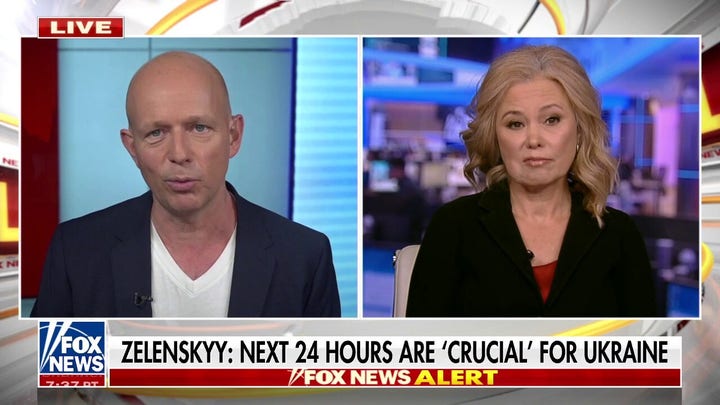 Koffler and Dreeke noted the diligence with which Russian intelligence officers do their research, which they then use to form their policies and operations.

"They do their homework," Koffler said. "That's the one thing that is very different from the way that we do things. We're just not nearly as diligent."

Koffler, author of "Putin’s Playbook," added that Russian intelligence officers "do their homework for years," regardless of whether the information is pertinent to current events.

"They collect regardless – the Russians and the Chinese do – Because that's just how they do business," Koffler went on. "They view us as threat number one. And sooner or later, they believe that information will be useful, whether it's for wartime or peacetime, when they want to undermine and somehow cause some kind of disruption."

Russian intelligence officers who are in the United States under diplomatic cover are not necessarily interested in the people who live in the neighborhood. They will try to make friendships and become close with people whom the Russian government deems potentially useful, such as government officials or their friends – "somebody from whom they can collect information," Koffler explained.

The Grand Kremlin palace, left, and the Cathedral of the Annunciation in Moscow, Russia, on Tuesday, Feb. 15, 2022.  (Andrey Rudakov/Bloomberg via Getty Images)

"It’s not like they try to steal your wallet or your purse and get your information that way," she said. "It’s called targeteering – they identify, ‘OK, we need a list, we need somebody in your State Department,’ or, ‘We need somebody at the United Nations’ … and they do their homework and they study" their target, Koffler further said.

She went on: "Where does this or that person hang out? Do they play golf, for example? Once they identify who exactly they need, what kind of access, they figure out that person's patterns of behavior … they would show up, like, on a tennis court if you are playing tennis. And they would strike a conversation with you and try to be your friend. And you have no idea that you've been targeted because it all looks so innocuous and accidental."

Dreeke said Russian intelligence officers are looking to get to classified or proprietary information as well as those individuals who are in the position to know about it. The information they’re seeking can depend on the "flavor of the day."

During his time investigating Russian operatives and goals, Chechnya was among the topics of importance for the federation, Dreeke said.

"They wanted to know what different organizations were due to support or defend Chechnya," he said. "Cancer research, believe it or not, was a huge one … They were also tracking shipping – of all kinds of things, they’re tracking things like MRE [meals ready-to-eat] … because that might tell you where the U.S. forces are building up or not building up."

Based on his experience, Dreeke estimated that 95% to 98% of the information that intelligence officers are collecting is "benign," while the remaining 5% to 2% is classified – "it is proprietary that does that greater damage."

Located on tree-lined West 255th Street and Mosholu Avenue, the building is 20 stories high, and features 15 residential units per floor, according to The Riverdale Press.

"Comrade J: The Untold Secrets of Russia’s Master Spy in America after the End of the Cold War," a book written by Pete Earley, describes the compound as having a flat roof under which there were "dozens of antennas designed to match signals and conversations from New York City’s airwaves."

Dreeke noted that while he was not heavily involved with the technology, the antennas were known to be used for sending and receiving coded messages, as well as for collecting information.

"If they can collect it, they collect it," he said. "[The] Russians are great at sucking in every bit of information they can because their analytical machine back in Moscow is really, really good."