The president reacted to the leak, warning overturning Roe v. Wade would be a 'fundamental shift' as abortion policy would be up to the states.

Protests broke out at the Supreme Court building within minutes of the initial leak Monday evening. D.C. Police have activated additional units to respond to potential "First Amendment activity" through Sunday, according to Fox 5 DC.

The move comes after a draft copy of Justice Samuel Alito's opinion upholding a Mississippi abortion law leaked to Politico. The decision would overturn Roe v. Wade if adopted by four other justices.

Chief Justice John Roberts described the leak as a "betrayal" of the court on Tuesday and ordered an investigation into the incident.

Republicans on Capitol Hill have also expressed outrage over the nearly unprecedented leak, while Democrats have sounded the alarms in defense of abortion.

Senate Minority Leader Mitch McConnell called for the leaker to be prosecuted, saying the move was a transparent attempt to subvert the court's ruling.

"Somebody, likely somebody inside the court itself, leaked a confidential brief to the press, to stir up a pressure campaign," McConnell, R-KY, said. "Whoever committed this lawless act knew exactly what it could bring about." 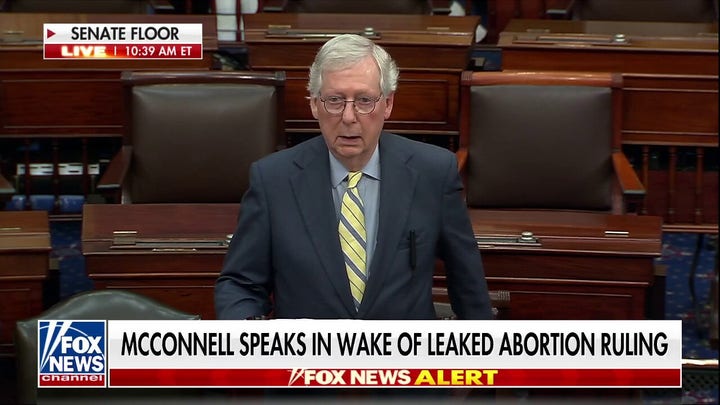 "The same political movement that used a leak to move up the timeline of Justice Breyer's retirement process is trying to use yet another leak to make the court less secure and less impartial," he added.

"The Republican-appointed Justices’ reported votes to overturn Roe v. Wade would go down as an abomination, one of the worst and most damaging decisions in modern history," Schumer said in a joint statement with House Speaker Nancy Pelosi, D-CA.

"Several of these conservative Justices, who are in no way accountable to the American people, have lied to the U.S. Senate, ripped up the Constitution and defiled both precedent and the Supreme Court’s reputation – all at the expense of tens of millions of women who could soon be stripped of their bodily autonomy and the constitutional rights they’ve relied on for half a century," the pair continued.

If the Supreme Court's decision does ultimately overturn Roe, authority to regulate abortion policy will fall to the states. More than a dozen states have already passed "trigger laws" that would activate stringent abortion restrictions as soon as Roe is overturned, while many others have already passed explicit protections for abortion.

Biden appeared to suggest Tuesday that overturning the 1973 decision would ban abortion nationwide, which is not the case.

"The idea that we're going to make a judgment that is going to say that no one can make the judgment to choose to abort a child, based on a decision by the Supreme Court, I think goes way overboard," he told reporters during a press gaggle.