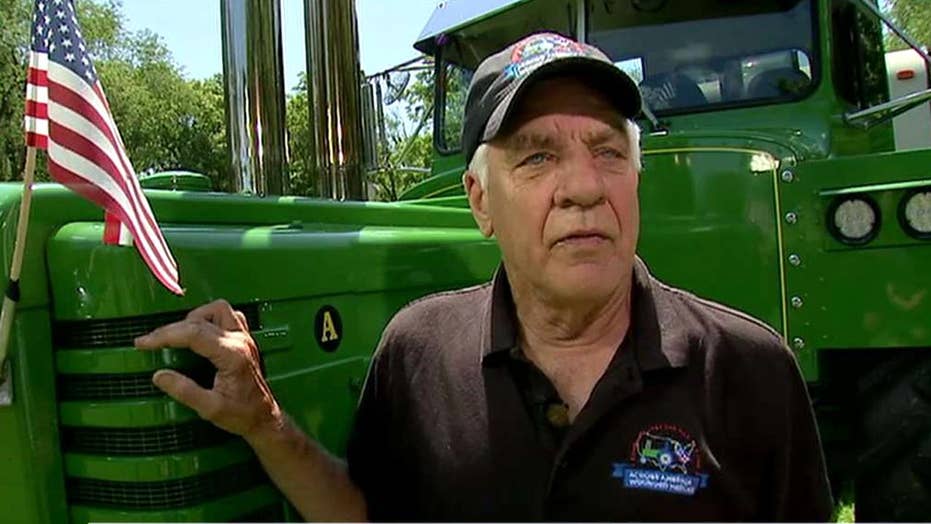 Man drives tractor across the country for wounded veterans

Matt Finn has more on the patriotic trek

Ivan Stoltzfus, 70, was a successful farmer for 30 years near Lancaster, Pennsylvania. Then one day, he recalled wise words from his father and he decided to fulfill a lifelong dream.

“He said one day out of the blue, ‘Ivan, if you have a dream, don't wait until you're too old and physically can't do it,’”Stoltzfus said.

Stoltzfus always wanted to drive across the country, like his father did for work when he was a child. And for a long time he had a calling to somehow give back to American veterans. He said he didn't want to take his freedom for granted.

The retired farmer combined both of his dreams and decided to drive across the country in a custom, 1948 John Deere tractor to raise awareness and money for wounded heroes. (Fox News)

WOUNDED VETERANS FIND NEW PURPOSE: SAVING THE PLANET, ONE CORAL AT A TIME

"It got to a point where I couldn't even sleep at night,” Stoltzfus said.

In 2014, the farmer combined both of his dreams and decided to drive across the country in a custom, 1948 John Deere tractor to raise awareness and money for wounded heroes.

Now he’s at it again. This time, he is driving from Pennsylvania to Florida to the Pacific Northwest and back through the Midwest to Gettysburg, Pa.

“I like to think going across America as planting that seed of hope,” Stoltzfus said. “Giving those hope that have given up.”

Stoltzfus has raised nearly $50,000 for veterans. In particular, those who suffer from post-traumatic stress disorder.

But he said it’s not about the money. Instead, his real treasure is the personal interactions he gets with veterans and their families on the road.

In the short time Fox News spent with Stoltzfus in the small town of Oregon, Illinois, three different strangers stopped to greet him. Two were veterans. One paid for his gas. Both thanked him.

The third man, Mike Olman, had been following Stoltzfus' journey online and was stunned to see him in person. He was brought to tears at the sight of the tractor because his 23-year-old son was killed in the Iraq war.

"Somebody from above decided my route needed to come through Oregon today and here I am," Olman said.

Stoltzfus' drive is not easy. He's on the road for up to 14 hours per day. The cab heavily vibrates. He compares the constant shifting and steering in the antiquated cab to "dancing like a monkey on a hot tin roof."

But he says he wouldn't have it any other way.

"It's all worth it,” he said. “Because you never know what's going to be around that next curve, or what veteran I'm going to meet."

You can donate to Stoltztfus or track his journey at www.helpamericanheroes.com.