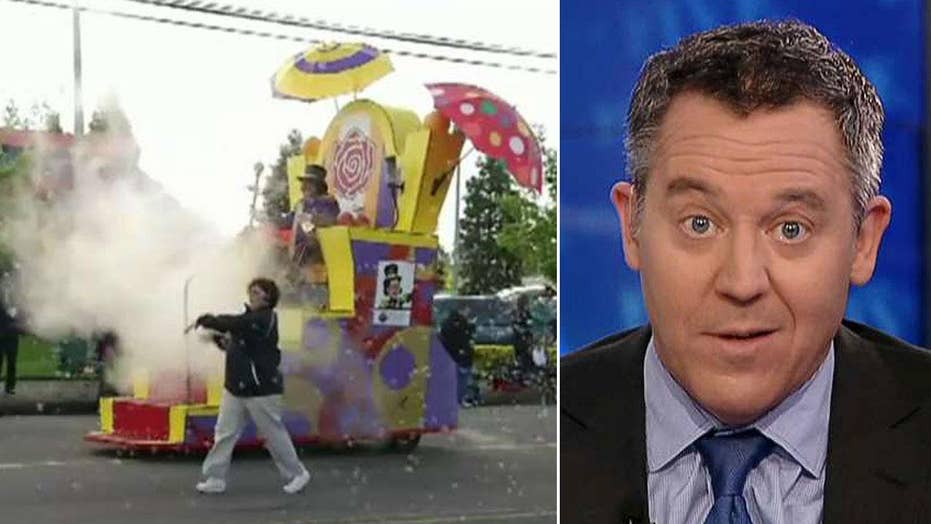 Gutfeld: Another victory for the anti-free speech movement

For years, the 82nd Avenue of the Roses parade has kicked off Portland’s annual Rose Festival and marked beginning of the Oregon city’s parade season.

But after a threatening email was sent to parade organizers - singling out members of the Multnomah County Republican Party (MCRP) who were planning to take part – officials have decided to cancel the family-friendly procession in an effort to avoid any clashes between protesters and marchers.

“This would have been the 11th year of the parade. This is culturally enriched community that has grown very diverse over the years,” Rick Jarvis, a spokesman for the Rose Festival Foundation, told Fox News. “The association has worked very hard to get everyone together in one common are and the parade helped served in that function.”

Local media reported that the email was sent from "thegiver@riseup.net," and said that if members of the MCRP marched on Saturday they planned to have “two hundred or more people rush into the parade into the middle and drag and push them out.”

“You have seen how much power we have downtown and that the police cannot stop us from shutting down roads so please consider your decision wisely,” the anonymous email said, in reference to the violent riots that broke out in Portland after the 2016 presidential election, reported the Oregonian. “This is non-negotiable.”

While the author of the email did not mention any group or particular affiliation, the message did include links to two different Facebook pages set up for counter-protests; one by Direct Action Alliance and the other from Oregon Students Empowered.

"We are disappointed that the parade was canceled," he said. "We're members of this community and this is an awesome parade."

You have seen how much power we have downtown and that the police cannot stop us from shutting down roads so please consider your decision wisely.

Parade organizers did ask the MCRP to pull out of the event, but MCRP chair James Buchal refused and asked for the city to provide more police protection. Buchal added that his group was ready to march in the parade despite the threat and that the organization had participated in the event for a number of years without any issues.

"We weren't willing to just walk away quietly," he said. "The next thing we knew the whole thing was canceled."

Jarvis said that it was decided to cancel the parade after the city informed organizers that the police department couldn't offer any additional security. Community organizers are encouraging residents to visit the businesses on 82nd Avenue on Saturday in light of the parade cancellation.

“You can't really prevent it. You can be aware, you can be ready, anticipate, but if somebody's going to do something to interrupt or to attack - if you want to use that word - you can't really be in position to prevent it,” Jarvis said.