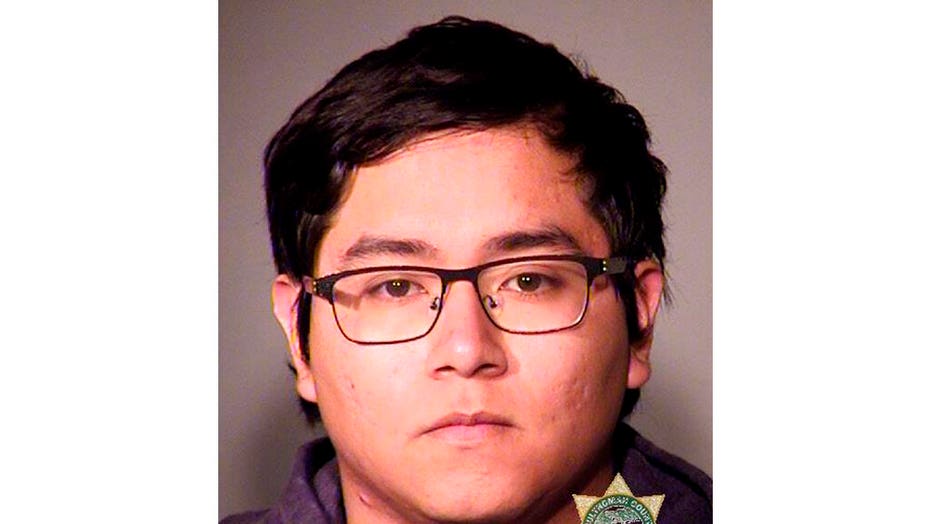 Police identified the suspected gunman who was tackled by a football coach at an Oregon high school Friday as 18-year-old Angel Granados Dias, a student at the school.

Dias was booked at the Multnomah County Detention Center, accused of possession of a firearm in a public building, attempting to shoot a gun at a school and reckless endangerment, according to the Portland Police Bureau.

He is being held on $500,000 bail and is to appear in court on Monday at the Multnomah County Circuit Court.

Two students alerted staff members to "concerning behavior" by Dias on Friday and security attempted to find him at school but he entered the classroom with the gun before they were able to do so.

The suspect reportedly appeared in the doorway of a government class at Parkrose High School on Friday dressed in a black trenchcoat and brandished a gun. Students were able to flee through the back door of the class and Coach Keanon Lowe was able to make a tackle before police arrived on the scene.

Keanon Lowe of the San Francisco 49ers NFL football team. Lowe, a former analyst for the 49ers and wide receiver at the University of Oregon, subdued a person with a gun who appeared on a Portland, Oregon high school campus Friday. Lowe is now a coach at Parkrose High School. (AP Photo/File)

The school was evacuated and a nearby middle school was on lockdown for several hours as police investigated the scene and recovered a gun from school property.

Students gather outside Parkrose High School during a lockdown after a man armed with a gun was wrestled to the ground by a staff member. (Dave Killen/The Oregonian via AP)

"I'm just happy everyone was OK," Lowe told The Oregonian/OregonLive. "I'm happy I was able to be there for the kids and for the community."

Lowe has been a coach at the high school for about a year, according to his LinkedIn page. Before that, he worked for his high school alma mater, Jesuit High, where he was a star athlete.