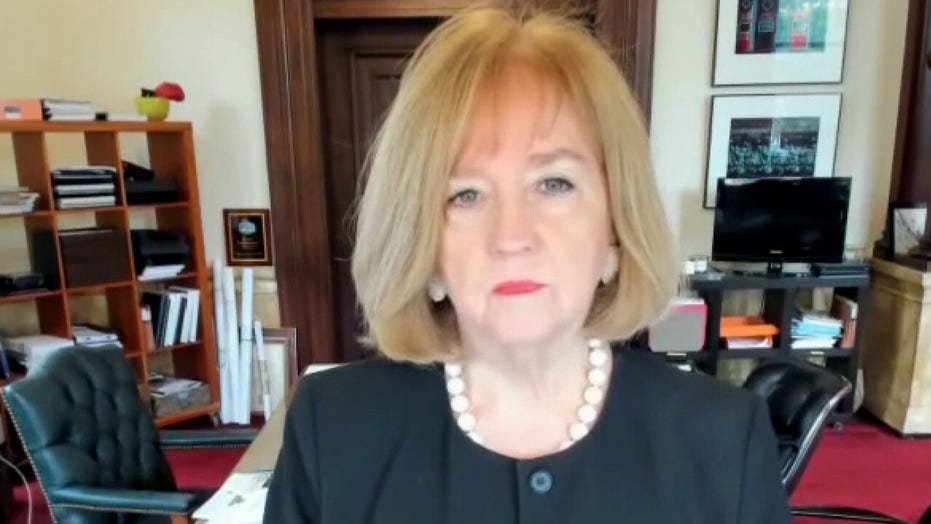 St. Louis mayor says supporting law enforcement should not be a partisan issue

A Black man restrained by western New York police officers in March died of asphyxiation after a hood was put over his head and his face was pressed into the pavement, according to police records.

Daniel Prude was visiting family in Rochester from Chicago when his brother, Joe Prude, called police to report he was having mental health issues. Daniel Prude, who had taken his clothes off, complied with responding officers and asked him to put his hands behind his back and get on the ground as light snow continued to fall.

During the March 23 encounter, officers put a "spit hood" over Prude's head. The garment is used to protect officers from saliva. Spit hoods have been scrutinized as a factor in deaths of several prisoners in the U.S. and other countries in recent years.

POLICE SHOOT, KILL MAN IN DC AFTER RESPONDING TO REPORT OF GUNS IN CAR

Rochester police officers hold down Daniel Prude on March 23 in Rochester, N.Y. Prude, a Black man who had run naked through the streets of the western New York city, died of asphyxiation after a group of police officers put a hood over his head, then pressed his face into the pavement for two minutes, according to video and records released Wednesday by the man's family. (Rochester Police via Roth and Roth LLP via AP)

While on the ground, Prude demanded the hood be removed before an officer allegedly slammed his head into the street, police reports said. Another reportedly held his head against the pavement while ordering him to "stop spitting."

One officer wrote in a report that the hood was used because Prude was spitting at officers and they were concerned about the coronavirus.

His head was held down for 2 minutes before he stopped moving. Medics performed CPR before loading him into an ambulance. A medical examiner ruled Prude's death a homicide caused by “complications of asphyxia in the setting of physical restraint.”

He was taken off life-support March 30. The report lists excited delirium and acute intoxication by phencyclidine, or PCP, as contributing factors to his death.

"The death of Daniel Prude was a tragedy, and I extend my deepest condolences to his family. I share the community’s concerns about ensuring a fair and independent investigation into his death and support their right to protest," James said in a statement. "As with every investigation, we will follow the facts of this case and ensure a complete and thorough examination of all relevant parties. We will work tirelessly to provide the transparency and accountability that all our communities deserve.”

Rochester police officers prepare to load Daniel Prude into an ambulance. (Rochester Police via Roth and Roth LLP via AP)

On Wednesday, protesters gathered outside Rochester’s Public Safety Building to demand the officers involved in Prude's death be criminally charged.

“The police have shown us over and over again that they are not equipped to handle individuals with mental health concerns. These officers are trained to kill, and not to deescalate. These officers are trained to ridicule, instead of supporting Mr. Daniel Prude,” Ashley Gantt, of Free the People ROC, said at the news conference with Prude’s family.