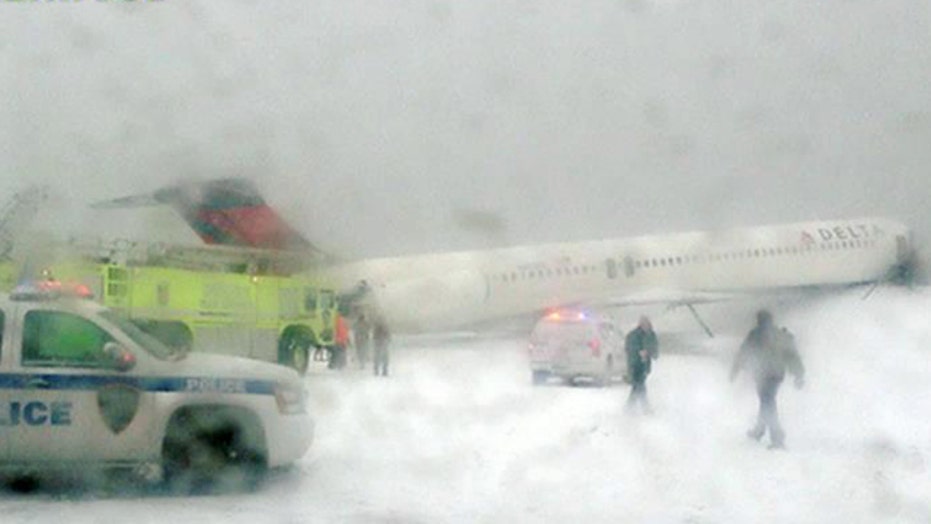 Even before a Delta plane arriving at New York’s LaGuardia Airport skidded off the runway Thursday, prompting the airport to temporarily close, air travel already was a nightmare with 4,275 flights cancelled across the country and another 2,000 delayed.

One passenger on board the plane, who was forced to exit onto the snow-swept runway, turned and took a picture of the MD-88 jet that crashed through a metal-linked fence. He tweeted the image and summed up the crash that left dozens with minor injuries: "My day so far."

By midday Thursday, a strong cold front moved across the eastern U.S. and dumped more than 20 inches of snow into parts of Kentucky. Conditions worsened in the Northeast as snow started to pile up, reaching nearly 6 inches and counting in King of Prussia, Pennsylvania, outside Philadelphia.

In some cases, the Associated Press reported, old records could be obliterated.

USA Today reported that LaGuardia saw nearly 75 percent of its traffic canceled after the runway incident. Dallas/Fort Worth reportedly had 800 cancellations. Airports across large swaths of the East have experienced significant cancellations, including Lexington, Ky., Pittsburgh and Raleigh-Durham.

By Thursday afternoon, the winter storm dumped 3 inches in Washington, D.C. and northern Virginia, 6 inches in much of Baltimore County, and more than 9 inches in parts of western Maryland.

The incident at LaGuardia illustrated the dangers passengers face when landing in poor weather.

The nose of the plane was leaning on a berm that separates the runway from Flushing Bay, MyFoxNY.com reported. Passengers saddled with bags and bundled up in heavy coats were helped down from the wing and onto the snowy pavement, just feet from the water. Everyone was silent as the plane slid, but some children started crying after it came to a stop, passengers said.

"If we wouldn't have hit the snowbank, we'd be in the water right now," said Charles Runels, a passenger from Atlanta.