President Trump on Being Accused of Anti-Semitism

PITTSBURGH – President Trump's planned visit today to the site of Saturday’s mass shooting at a Pittsburgh synagogue has split opinion between local leaders and residents who are questioning the motive and timing behind the trip.

William Peduto, Pittsburgh's Democrat mayor, warned the visit would be a “distraction” and pull focus from the funerals of the 11 worshippers who were gunned down during the weekend massacre. The first two funerals are scheduled for later today.

“If the president is looking to come to Pittsburgh, I would ask that he not do so while we are burying the dead,” Peduto said.

The mayor also said the city does not have enough public safety officials to provide “enough protection at the funerals and to be able, at the same time, to draw attention away to a potential presidential visit.”

Peduto and Trump butted heads over the weekend after the president suggested that armed guards in places of worship would help curb shootings. Peduto strongly pushed back on Trump's remarks, a familiar refrain by the president. 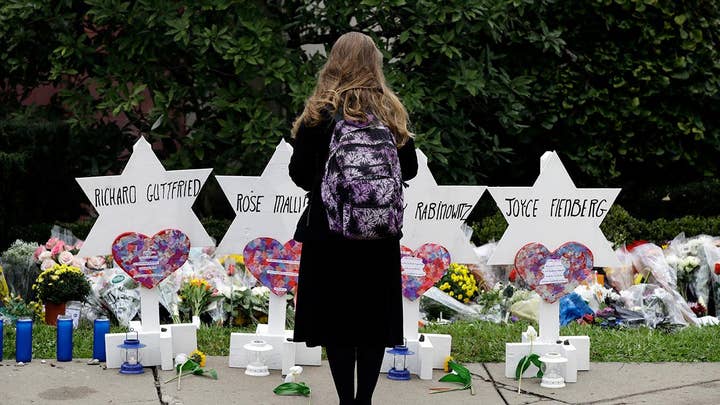 Pittsburgh City Councilman Corey O’Connor also believes Trump should postpone his trip and said the city’s “hearts and minds are going to be on the victims” and not wrapped up in a “national distraction.”

Others came down even harder on the president.

Bend the Arc, a Jewish organization whose mission statement says they are "rising up in solidarity with everyone threatened by the Trump agenda", published an open letter that said he would not be welcome in Pittsburgh until he denounced white nationalism and stopped “targeting” minorities.

Several mourners Fox News spoke to near the synagogue Monday night say they want Trump to stay away and let the city heal.

A woman pays her respects at a makeshift memorial in the aftermath of a deadly shooting at the Tree of Life Synagogue in Pittsburgh, Monday (AP)

“He’s only coming here to use us for political gain,” Pittsburgh native Nelson Suter told Fox News. “Let us grieve. Give us this moment. Don’t make it all about yourself for once.”

Lynnette Lederman, the former president of the synagogue, added: “I do not welcome this president to my city.”

But not everyone wants Trump to call off the trip.

“It’s not inappropriate for him to come,” Jim Roddey, former chairman of the Republican Committee of Allegheny County, told NBC-affiliate WPXI. “However, he has been very active in the midterms…and I hope he’s not going to come here and have a rally. That’s not what the city needs. It’s not what the people want.”

Robert Bowers, the suspect in the deadly shooting at the Tree of Life Synagogue in Pittsburgh on Saturday, Oct. 27 (AP)

“If he wants to come here, fine,” he said. “I just hope and pray he’s respectful.”

Rabbi Jeffrey Myers, who was leading services at the Tree of Life Synagogue during Saturday’s shooting, told CNN “the President of the United States is always welcome.”

“I’m a citizen. He’s my president. He is certainly welcome."