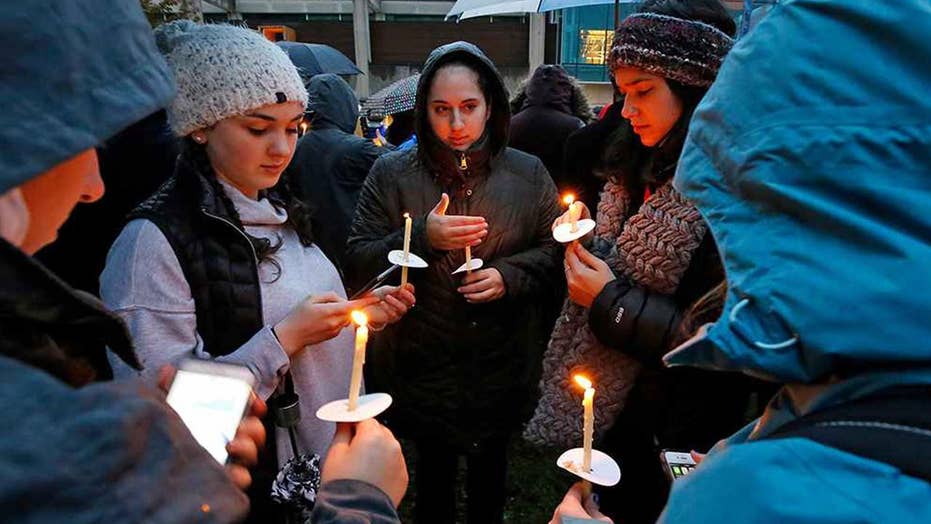 PITTSBURGH – A solemn but powerful presence was seen in Pittsburgh — as thousands crowded into Soldiers & Sailors Memorial Hall. So many came that many more were pouring into the streets and huddled together in the rain for a candlelight vigil. The teary-eyed crowd spoke of resilience, healing, and gun control the day after a mass shooting claimed the lives of 11 people at the Tree of Life synagogue.

The latter, gun control, is bringing forth mixed emotions for many who stood divided on President Trump’s recent statement: “If they had protection the results would have been far better.” It is a stance that he has echoed in past mass murders.

While many attendees never imagined having to have the conversation of arming places of worship, residents in the city known for its friendly hellos and tight-knit communities stood together mourning the loss of their neighbors, and acknowledging yet another mass shooting.

An October 28 vigil after the mass shooting in Pittsburgh. (Fox News)

Ray Iwanonkiw Sr., a resident of a neighboring community agrees with Trump’s position: “We need protection,” he continued, explaining that while he doesn’t believe violence will solve violence, he just doesn’t see any sensible way to stop what he calls the “insensible.”

“If people know that there is the presence of security here [in places of worship] they are going to back off,” he added.

Logan Gatenby, a student at the University of Pittsburgh, says he was born in 1996, and he frankly can’t remember a time when armed forces and metal detectors weren’t the norms.

“I was born after Columbine,” said Gatenby. “When someone has the intentions to do something this heinous I don’t know if government action or policy can really change someone’s intention to do something so evil.”

But when asked if he would feel safer with armed guards in his place of worship, his response was unsure. “I just don’t know about the concept,” said Gatenby. He added that in the city of Mr. Rogers, “for every one person you see doing something hateful, there are hundreds who are trying to help.”

According to data from collected for the Associated Press, a total of 11 mass shooting incidents have occurred in 2018.

It's a number Rabbi Ethan Linden, both a former resident, and now leader of a New York congregation, says he won’t accept as a norm.

“I lived in Europe for two years, and every synagogue has a police officer in front of it and always felt to me like a sad statement,” said Linden.

“I don’t want people to have to have guns to go to synagogue, school, or to camps I want us to find some common sense changes so that people don’t feel like they need to be armed just to leave their homes.”

In a community still grieving, vigils like Sunday's are the first step in finding peace and discussing how and if they can return to a sense of normalcy. And while normal may look different for the group, they have all taken comfort in one another and found peace that suspect Robert Bowers is no longer a threat to their community.

“I don’t have all the answers,” said Iwanonkiw. “And everyone may not agree with me, but I am thankful and proud of how we’ve come together.”