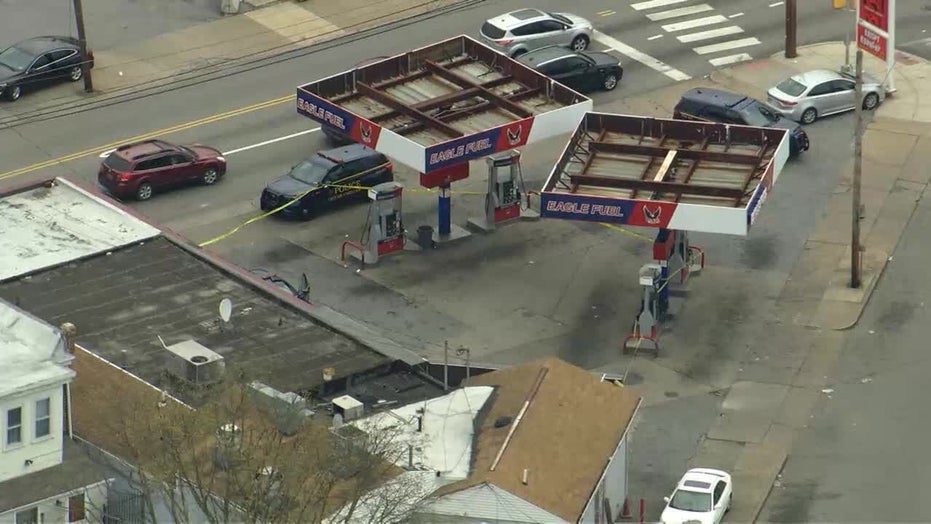 A 4-year-old girl was shot and killed at a Philadelphia-area gas station Tuesday by her 2-year-old brother, according to reports, as gun violence continues to impact underage victims in the region.

The shooting occurred at a Mano's Gulf Service Station in Chester, located 20 miles south of Philadelphia, Fox affiliate WTXF-TV reported. Authorities said the boy was handling a gun inside a vehicle parked at a gas pump when it went off and the girl was shot.

Adults at the scene took her to a hospital where she died. No other information was released.

The killing was one of several involving minors in the region so far this week.

A 4-year-old girl was shot and killed Tuesday at a Philadelphia-area gas station, possibly by her younger sibling by accident, authorities said. (WXTF)

"It just speaks to the depravity of the violence," Joseph Sullivan, a former deputy police commissioner for the Philadelphia Police Department, told Fox News.

A 16-year-old was recovering in a hospital after being wounded by gunfire Tuesday afternoon inside a home. The teen was injured in the hip. No arrests have been made and no weapon was recovered.

On Monday, several teenagers in Philadelphia were victims of gunplay. One involved 15-year-old Juan Carlos Robles-Corona, who was shot and killed steps away from his front door while walking home from school.

Officers were called to the 2200 block of North 15th Street for reports of a shooting around 3 p.m.

Corona, an eighth-grader, was struck multiple times and nearly 28 shell casings were found at the scene. He was taken to Temple University Hospital where he later died. The news station said the shooting may be linked to an earlier physical dispute.

Hours later, a 13-year-old boy was shot several times while sitting inside a parked car. Someone apparently walked up and fired at least a dozen shots into the vehicle. Investigators believe the boy was targeted.

He was taken to a hospital with gunshot wounds to his head, chest and arms, police said.

Overall, the city is seeing an uptick in homicides, with 125 reported as of Monday, a 2% increase compared to the same day in 2021. Sullivan blamed the escalating violence on several factors, including an undermanned police force, the district attorney's reluctance to aggressively prosecute gun crimes and underfunded community-based gun violence intervention programs.

"You have everyone on different sheets of music right now and this is the result," he said. "As the weather gets better it's going to get worse."