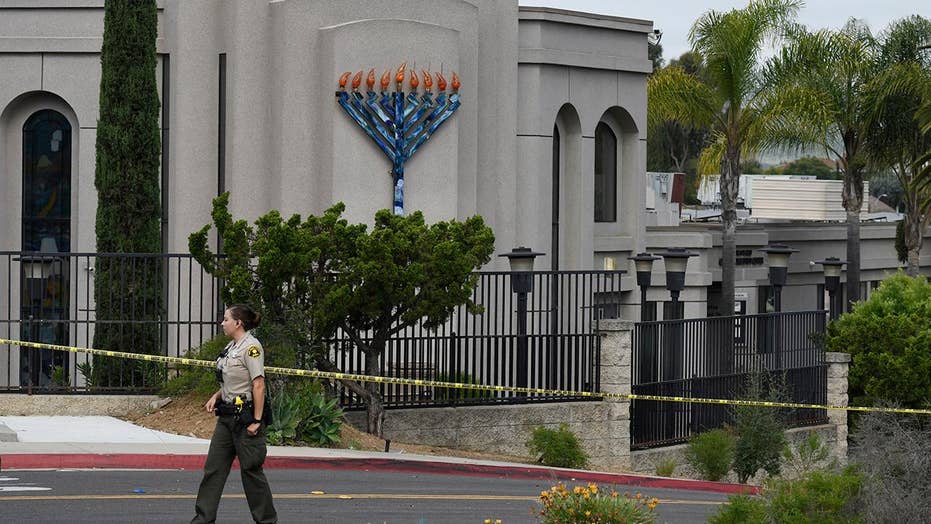 Oscar Stewart, a veteran and member of the California synagogue targeted by the shooter, says the alleged gunman dropped his rifle and ran when approached; William La Jeunesse reports.

The family of the 19-year-old man suspected of attacking a Southern California synagogue over the weekend disavowed their son Monday and offered condolences to the victims.

John T. Earnest’s parents said they raised him and his five siblings in a family, faith and community that rejected hate.

“Our son’s actions were informed by people we do not know, and ideas we do not hold,” the parents said in a statement, which did not include their names.

The couple added that they are shocked and saddened that Earnest “is now part of the history of evil that has been perpetrated on Jewish people for centuries.”

“How our son was attracted to such darkness is a terrifying mystery to us, though we are confident that law enforcement will uncover many details of the path that he took to this evil and despicable act,” the statement said.

Earll Pott, a family attorney who issued the statement, said the parents will not provide a legal defense for their son, who will likely be represented by a public defender.

Authorities say Earnest burst into the Chabad of Poway near San Diego on the last day of Passover, a major Jewish holiday that celebrates freedom, and opened fire with an assault-style rifle.

About 100 congregants were worshipping when the gunman killed Lori Kaye, 60, and wounded the synagogue’s rabbi, Yishoel Goldstein; 8-year-old Noya Dahan; and her uncle Almog Peretz.

The FBI said Monday that it had received tips about a threatening social media post approximately five minutes before Saturday's attack. The tips to an FBI website and hotline included a link to the anonymous post but did not offer specific information about its author or the location of the threat. The bureau said Monday that employees immediately tried to determine who wrote the post, but the shooting occurred before they could establish his identity.

One of the tipsters told The Associated Press that he called the FBI tip line at 11:15 a.m. Saturday, approximately 15 minutes before the shooting took place, because the post linked to a manifesto that said the author was responsible for a mosque arson in the city of Escondido last month. He says he found online that had the mosque attack had happened and feared the new threat was real.

The tipster, who refused to provide his name because of security concerns, said the call with the FBI lasted four or five minutes and the shooting happened soon after. He described the FBI as quick and professional and said he doesn't know what the bureau could have done.

Earnest’s parents, who are cooperating with investigators, said their sadness “pales in comparison to the grief and anguish our son has caused for so many innocent people.”