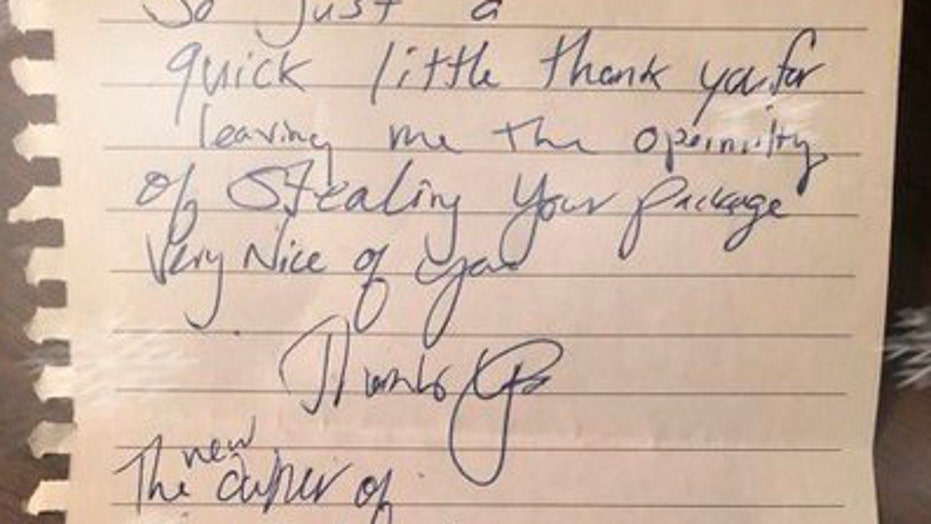 A porch pirate who wasn't content with just stealing a delivery package -- took the crime a step further when they decided to leave a handwritten note thanking the victim for letting them take it.

Homeowner Hilary Smith, of St. Paul, Minnesota, said she found the note on her porch after coming home from work around 5:00 p.m., and hours after she received a text message saying her package was successfully delivered.

“So just a quick little thank you for leaving me the opportunity of stealing your package. Very nice of you. Thank you," the note said.

A thief who stole a package from the front steps of a St. Paul home left a thank-you note behind. St. Paul police posted a picture of the note on Twitter on Friday, and reminded residents who are expecting deliveries to take precautions to avoid thefts. (St. Paul Police Department/Star Tribune via AP)

It was mockingly signed: “The new owner of your package."

The St. Paul police posted a picture of the cruel note on Twitter while offering tips to residents to prevent this type of crime from happening. They were also curious to see if others received a similar note, asking local residents to report these types of theft.

“It’s something we’ve never seen before, and I don’t know what to chalk it up to. It’s so unheard of,” Sgt. Mike Ernster told Fox6Now.

While a taunting note was extremely rare, police said that 94 package thefts have been reported in St. Paul since Oct. 1. They added porch thieves are more frequent around the holidays.

Smith, who posted the pictures to a Facebook group she belongs to, said the package was a small gift for her boss -- a portable phone charger -- so she decided not to report the crime. The post received more than 1,700 reactions and 600 comments in one day.

“I looked down and there was a piece of notebook paper folded neatly on the top step. So I picked it up, read it, it basically was a ‘thank you’ note for letting me steal your package,” she told the outlet.

Smith couldn't believe what she was reading, describing her mood as "quite flabbergasted." She called the theft "brazen and arrogant."

“I do appreciate a nicely-crafted ‘thank you’ note, but this is ridiculous," she told Fox6Now.

As the holidays approach, Smith says she has officially installed a decoy package on her steps that she hopes will combat porch bandits. She described it as being filled with "a little gift from my dog."