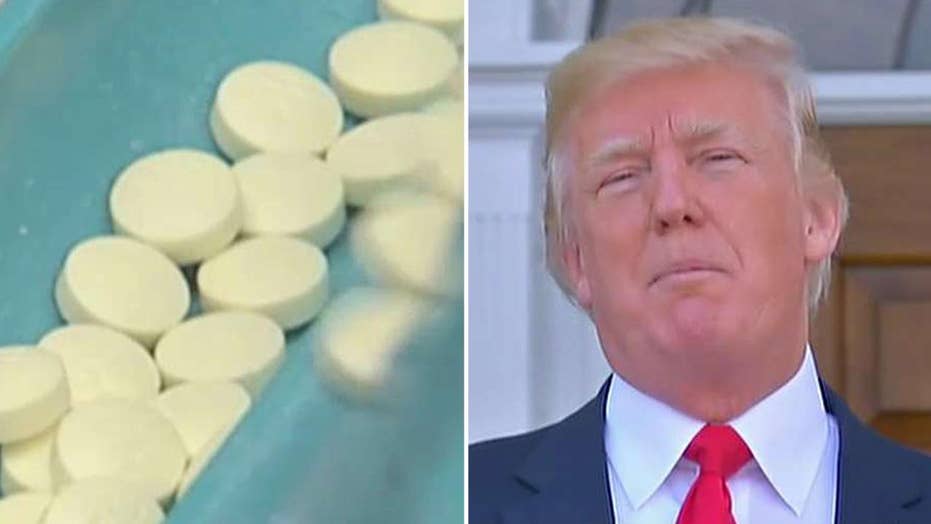 Marianne Rafferty has the details on the White House plans

WASHINGTON, D.C. – The Trump administration is ready for war, and the president's top general in this particular fight says there is no more time to waste.

The target is the opioid epidemic, which has helped make drug overdoses the main cause of death for Americans under 50. The plan is to hunt down the bad guys – the drug dealers and unethical health professionals who are dispensing the opioids and either creating, or feeding, addictions, and help people who are addicted by getting them into treatment, said Trump’s drug czar, Richard Baum, in an exclusive interview with Fox News.

“It has to be both law enforcement and health, we have to do more of everything because of the crisis that we’re in,” said Baum, acting director of the White House Office of National Drug Control Policy, in a wide-ranging interview this week in his office. “The president is treating this like an emergency and a crisis.”

Violent cartels, greedy doctors and street dealers are all part of a syndicate that floods the nation with drugs, including fentanyl and other dangerous substances.

On Wednesday morning, Baum met with 28 directors of the High Intensity Drug Trafficking Areas (HIDTA) program, created by Congress in 1988 and which the drug czar’s office runs, to discuss the epidemic.

It has to be both law enforcement and health, we have to do more of everything because of the crisis that we're in. The president is treating this like an emergency and a crisis.

— Richard Baum, Trump drug czar, on the war on the opioid epidemic

“They’re out there partnering with state and local law enforcement to take down the drug trafficking organizations that are threatening their regions,” he said.

“Drug traffickers are out for the money, they’re taking these deadly products and bringing them to every corner of the United States,” Baum said. “They’re looking for how they can get their products out, they’re spreading all over the country, they’re in every community. When a market is saturated, they find other markets, they get embedded in the community, then expand.”

One of the concerns among those in the health profession and addiction recovery organization was that President Trump’s fight against the opioid epidemic would be law enforcement-centric, and not pay enough attention to treatment.

Baum said he wanted to put that concern to rest.

“We need to draw a distinction between people who are basically engaged in drug use, drug possession, and people who are traffickers and significant dealers and violent criminals,” Baum said.

“They’re different people,” he said. “People that are drug traffickers deserve a significant penalty for their crime, they’re threatening the health and safety of our citizens. People that are drug users have an addiction problem, a substance abuse disorder, and I really want to get them into treatment.”

Baum, who has worked in various posts in the Office of National Drug Policy for about 20 years, said Trump is the first president to seriously address the epidemic.

We need to draw a distinction between people who are basically engaged in drug use...and people who are traffickers and significant dealers and violent criminals.

On Friday, Baum said that the announcement by Trump about his intention to declare the opioid epidemic a national emergency was the kind of "clear and decisive leadership we need to help us get assistance to those who need it most."